Researchers at the Broad Institute of MIT and Harvard and the McGovern Institute for Brain Research at MIT have engineered changes to the revolutionary CRISPR-Cas9 genome editing system that significantly cut down on “off-target” editing errors. The refined technique addresses one of the major technical issues in the use of genome editing.

The CRISPR-Cas9 system works by making a precisely targeted modification in a cell's DNA. The protein Cas9 alters the DNA at a location that is specified by a short RNA whose sequence matches that of the target site. While Cas9 is known to be highly efficient at cutting its target site, a major drawback of the system has been that, once inside a cell, it can bind to and cut additional sites that are not targeted. This has the potential to produce undesired edits that can alter gene expression or knock a gene out entirely, which might lead to the development of cancer or other problems. 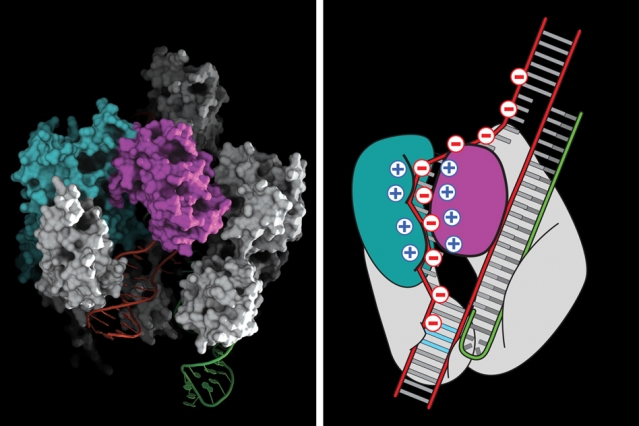 In a recently published paper Feng Zhang and his colleagues report that changing three of the approximately 1,400 amino acids that make up the Cas9 enzyme from S. pyogenes dramatically reduced “off-target editing” to undetectable levels in the specific cases examined. Zhang is the W.M. Keck Career Development Professor in Biomedical Engineering in MIT’s departments of Brain and Cognitive Sciences and Biological Engineering, and a member of both the Broad Institute and McGovern Institute.

After experimenting with various possible changes, Zhang’s team found that mutations in three amino acids dramatically reduced “off-target” cuts. For the guide RNAs tested, “off-target” cutting was so low as to be undetectable.

The newly-engineered enzyme, which the team calls “enhanced” S. pyogenes Cas9, or eSpCas9, will be useful for genome editing applications that require a high level of specificity. The Zhang Lab is immediately making the eSpCas9 enzyme available for researchers worldwide. The team believes the same charge-changing approach will work with other recently described RNA-guided DNA targeting enzymes, including Cpf1, C2C1, and C2C3, which Zhang and his collaborators reported on earlier this year.

The prospect of rapid and efficient genome editing raises many ethical and societal concerns, says Zhang, who is speaking this morning at the International Summit on Gene Editing in Washington. “Many of the safety concerns are related to off-target effects,” he says. “We hope the development of eSpCas9 will help address some of those concerns, but we certainly don’t see this as a magic bullet. The field is advancing at a rapid pace, and there is still a lot to learn before we can consider applying this technology for clinical use.