Every high school biology class learns about the tiny cells that comprise our bodies, as well as about many of the diverse actions that they perform. One of these actions is called mitosis, the series of steps through which a cell divides itself into two daughter cells, each of which has the same genetic material. Mitosis involves copying or “replicating” each of the cell’s DNA-containing chromosomes, and then separating them so that each of the two newly created cells has a complete set of chromosomes, just like the parent cell. Since each chromosome carries distinct genes, the daughter cells need to have all of them, and it is also damaging for the daughter cell to have too many of any of them.  Errors in mitosis can lead to cancer and other diseases, so understanding every detail of cell division is of great interest beyond basic scientific discovery.

It’s known that the act of chromosome separation is facilitated by a structure called the spindle, a framework composed of interconnected fibrous microtubules. The two copies of each chromosome (made through DNA replication) are attached to the spindle’s microtubule fibers and then moved apart to opposite sides of the dividing cell. In this way each of the two daughter cells receives one complete copy of the genetic material. This process requires the microtubule fibers to be organized into a spindle-like structure. Besides the microtubule fibers, the spindle also contains other densely packed materials that are visible under the electron microscope. These poorly understood materials are referred to as the spindle matrix and are believed to be important for cell division. 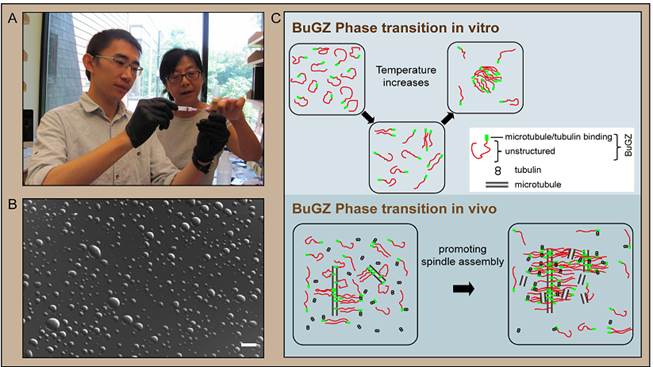 New work from a team led by Carnegie’s Yixian Zheng zeroes in on one particular spindle matrix protein, called BuGZ. The team’s findings show that BuGZ supports the assembly of the spindle matrix and microtubules.

The team found that under spindle-assembly conditions, many copies of the BuGZ protein condense along the microtubule fibers to form droplets. This condensation occurs because molecules of the BuGZ protein can assemble with each other, and is referred to as phase transition. During mitosis, these condensed BuGZ droplets promote the assembly of the spindle matrix, which makes additional microtubule fibers and links the fibers together, thereby promoting assembly of the spindle itself.

The formation of BuGZ droplets is the result of an evolutionarily conserved water-repelling (or hydrophobic) segment of BuGZ, which rejects interaction with the surrounding cellular fluid. Instead BuGZ proteins self-associate into these “inward-looking” droplet shapes. The team found that several other proteins found in the spindle matrix in both frogs and fruit flies have segments that resemble the water-repelling portion of BuGZ. They speculate that the whole spindle matrix could be formed through self-association of the hydrophobic segments of these proteins. This could help explain why many seemingly unrelated proteins make up the spindle matrix, which has been one of the central mysteries of the cell-division process.

“Because BuGZ is evolutionarily conserved and found in both vertebrates and invertebrates, our findings should open the door to further research on spindles and their matrices in a wide variety of organisms,” Zheng said.