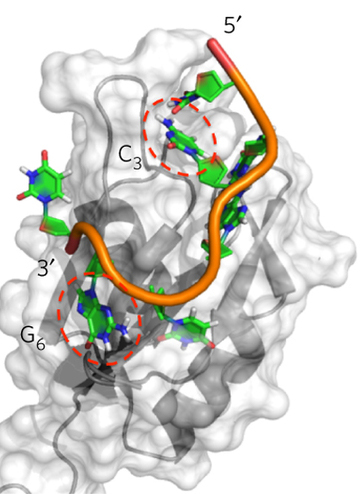 Over a century of research has shined light on the once-murky innards of our cells, from the genes that serve as our “blueprints” to the proteins and other molecules that are our cellular taskmasters.

Building on this basic knowledge, the search is underway for cellular mechanisms that could serve as gateways for new therapies. These could lead to precise treatments for disease — targeting a specific cellular function or gene with fewer unintended side effects. Ideally, these effects would also be temporary, returning cells to normal operation once the underlying condition has been treated.

A team of researchers from the University of Washington and the University of Trento in Italy announced findings that could pave the way for these therapies. In a paper published July 18 in Nature Chemical Biology, they unveiled an engineered protein that they designed to repress a specific cancer-promoting message within cells.

And that approach to protein design could be modified to target other cellular messages and functions, said senior author and UW chemistry professor Gabriele Varani.

“What we show here is a proving ground — a process to determine how to make the correct changes to proteins,” he said.

For their approach, Varani and his team modified a human protein called Rbfox2, which occurs naturally in cells and binds to microRNAs. These aptly named small RNA molecules adjust gene expression levels in cells like a dimmer switch. Varani’s group sought to engineer Rbfox2 to bind itself to a specific microRNA called miR-21, which is present in high levels in many tumours, increases the expression of cancer-promoting genes and decreases cancer suppressors. If a protein like Rbfox2 could bind to miR-21, the researchers hypothesized, it could repress miR-21’s tumour growth effects.

But for this approach to be successful, the protein must bind to miR-21 and no other microRNA. Luckily, all RNA molecules, including microRNAs, have an inherent property that imbues them with specificity. They consist of a chain of chemical “letters,” each with a unique order or sequence. To date, no other research team had ever successfully altered a protein to bind to microRNAs.

“That is because our knowledge of protein structure is much better than our knowledge of RNA structure,” said Varani. “We historically lacked key information about how RNA folds up and how proteins bind RNA at the atomic level.”

UW researchers relied on high-quality data on Rbfox2’s structure to understand, down to single atoms, how it binds to the unique sequence of “letters” in its natural RNA targets. Then they predicted how Rbfox2’s sequence would have to change to make it bind to miR-21 instead. Elegantly, altering just four carefully selected amino acids made Rbfox2 shift its attachment preference to miR-21, preventing the microRNA from passing along its tumour-promoting message.

The UW team spent several years proving this, since they had to test each change individually and in combination. They also had to make sure that the modified Rbfox2 protein would bind strongly to miR-21 but not other microRNAs. Since microRNAs have many functions in cells, it would be counterproductive to repress miR-21 while disrupting other normal microRNA-mediated functions.

The researchers also engineered a second protein that should clear miR-21 from cells entirely. They did this by grafting the regions of Rbfox2 that bound to miR-21 onto a separate protein called Dicer. Dicer normally chops RNAs into small chunks and generates functional microRNAs. But the hybrid Rbfox2-Dicer protein displayed a specific affinity to slice miR-21 into oblivion.

Varani and his team believe that Rbfox2 could be redesigned to bind to microRNA targets other than miR-21. There are thousands of microRNAs to choose from, and many have been implicated in diseases. The key to realizing this potential would be in streamlining and automating the painstaking methods the team used to model Rbfox2’s atomic-level interactions with RNA.

“This method relies on knowledge of high-quality structures,” said Varani. “That allowed us to see which alterations would change binding to the microRNA target.”

Not only would these be useful laboratory tools to study microRNA functions, but they could — in time — form the basis of new therapies to treat disease.