Complete the form below and we will email you a PDF version of "DNA Protection, Inch by Inch"

A European team of scientists has discovered how the cells produce tiny pieces of RNA – called piRNA – that identify and silence ‘jumping genes’ or transposons: genes that are able to change their position within the genome and therefore alter or disrupt the genetic code.

Comprising just 30 letters of genetic code, piRNA are only found within cells in the reproductive organs of animals, where ensuring the stability and integrity of DNA is of particularly vital importance. They bond to proteins called PIWI and guide them to the messenger RNA produced by the jumping genes, which the PIWI protein then destroys. 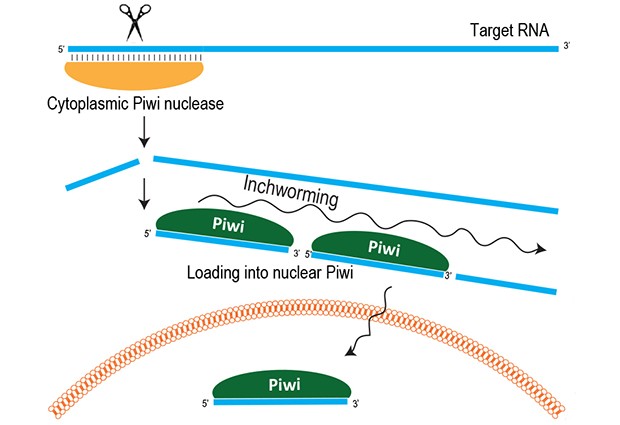 In germline cells PIWI proteins silence RNA from jumping genes by cutting them in sequences of ~30 nucleotides that will become piRNAs. These bind to a nuclear PIWI protein to repress the expression of the jumping gene in the nucleus. IMAGE: Ramesh Pillai/EMBL

The research, which involved groups from EMBL Grenoble and CEA-Grenoble, tracked the action of piRNA by inserting an artificial ‘jumping gene’ into a fruit fly germ cell. The scientists were able to see the piRNA bind to a jumping gene messenger RNA in the cell’s cytoplasm and to the PIWI protein, which then cut the first section from the jumping gene mRNA to silence it.

“We expected simply to see the jumping gene being silenced in the cytoplasm, so were really surprised to see it get converted into new piRNAs that were specifically loaded onto the PIWI protein that silences transposons in the nucleus,” explains Ramesh Pillai, from EMBL Grenoble. “Creating copies clearly increases the number of piRNAs that are able to recognise that particular jumping gene, as they retain the ‘memory’ of the original. This means that once the PIWI protein from the nucleus is loaded with the new piRNAs, it’s able to target the right gene in the DNA and silence it more efficiently.”

While jumping genes provide some benefits, uncontrolled changes in the DNA of reproductive cells can lead to sterility. The team, involving Radha Raman Pandey and David Homolka from the Pillai lab, is now investigating whether the piRNAs follow the same ‘inchworm’ process within mammalian cells, to take them a step closer to understanding the process within humans