It has long been known that DNA molecules in every cell get constantly damaged by things from the outside environment, like sunlight, cigarette smoke and radiation. However, more recently researchers have discovered that sources from within the cell itself can sometimes be even more damaging.

DNA, or deoxyribonucleic acid, is found in the nucleus of every cell. It is the code for the traits we have as human beings, and it serves as the warehouse of information needed to make a cell work. When something goes wrong with DNA, it can lead to a mutation and changes in the cell, and can sometimes lead to disease. 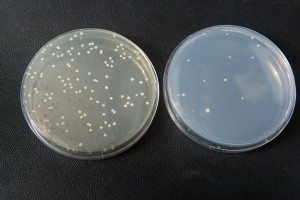 In a study the team — led by J. Lucas Argueso, CSU assistant professor and Boettcher Investigator in the Department of Environmental & Radiological Health Sciences — found that RNA, or ribonucleic acid, has a new and important part in this process. CSU researchers worked in close in collaboration with scientists from the National Institute of Environmental Health Sciences in North Carolina.

RNA is a molecule that plays a central role in the function of genes. It is the “business” end of a genome. The building blocks that cells use for making RNA are knows as ribonucleotides, which was the focus of the research paper.

“You don’t hear as much about RNA, but cells actually have much more RNA than DNA,” Argueso said.

Cells also have more ribonucleotides than deoxyribonucleotides, the building blocks for making DNA. Since the two are chemically very similar, it is quite common for cells to mistakenly incorporate RNA pieces into DNA.

Argueso and his team — including Hailey Conover, Ph.D. student in Cell & Molecular Biology and lead author of the study, and Deborah Afonso Cornelio, a post-doctoral researcher — are looking at what happens to yeast cells when they are unable to accurately remove RNA from DNA.

“The same problem happens in humans, carrots, butterflies, and yeast cells, the model organism used in our lab,” Argueso said. “The same yeast that is used to bake bread and to brew beer is an incredibly useful biomedical research model.”

Findings from this study have direct implications for children with Aicardi-Goutieres syndrome, a devastating disorder that affects the brain, the immune system and the skin.

“This is a very serious disease that affects children born without a critical enzyme that removes the RNA building blocks from DNA,” Argueso said. “Our model yeast cells have been engineered to have the same basic genetic defect as Aicardi-Goutieres children so that we can investigate this problem at its very core.”

What’s next for the team? Argueso said they want to extend their work to cancer research. The team wants to determine how ribonucleotides increase chromosome abnormalities and whether those increases are asymmetric, depending on which of the two strands of DNA the ribonucleotides are introduced.

Most cancers have some form of alteration in chromosomal structure, though Argueso said that breast and ovarian cancers are by far the most affected by this issue.

In addition, with some forms of chemotherapy that have been used for a long time, the mechanism of action is to decrease the production of DNA building blocks.

In other words, the very thing that the chemotherapy agent is encouraging cancer cells to incorporate causes them to acquire even more mutations. This could help explain why cancers often recur in more aggressive forms after someone goes into remission.

“This unintended consequence could be one of the mechanisms making that happen,” Argueso said.