Scientists have decoded the entire genetic make-up of the golden eagle in a bid to boost conservation efforts.

The findings are expected to shed light on how the birds’ DNA allows them to survive in different habitats.

Researchers say this information will be crucial for conservation efforts to preserve this protected species.

There are around 300,000 golden eagles worldwide. Most UK golden eagles are found in the Scottish Highlands and Islands, though the population is in decline.

The new genetic information will help researchers identify populations – or individual birds – that might be best involved in projects to reintroduce the species to other areas of the UK.

Dr Rob Ogden, Head of Conservation Genetics, the University of Edinburgh and Scientific Adviser, South of Scotland Golden Eagle Project said, “We will be able to compare the eagles being relocated to southern Scotland to those already in the area to ensure we are creating a genetically diverse population.”

Scientists from the University’s Royal (Dick) School of Veterinary Studies sent golden eagle samples to the Sanger Institute near Cambridge.

The project is part of the 25th anniversary celebrations for the Sanger Institute.

The research is part of the 25 Genomes Project, which will see experts at the Sanger Institute decode the DNA of 25 iconic British species including the red squirrel and the robin. 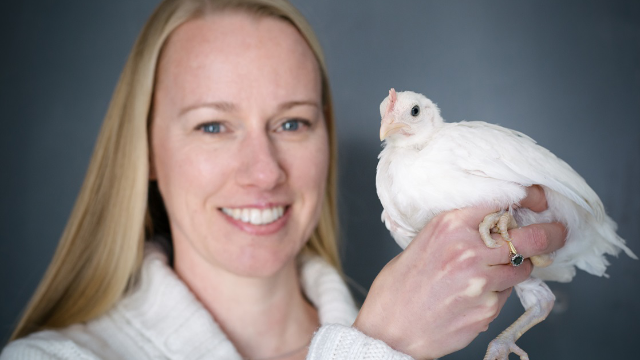 What Makes the Smartest Chicken?

END_OF_DOCUMENT_TOKEN_TO_BE_REPLACED

“We are developing new techniques which will ultimately improve the way we sequence and assemble many other species, including humans, in the years to come,” said Dr Kerstin Howe Senior Scientific Manager at the Wellcome Sanger Institute.

This article has been republished from materials provided by the University of Edinburgh. Note: material may have been edited for length and content. For further information, please contact the cited source.