Do Phytoplankton Evolve in Rhythm With the Earth’s Orbit of the Sun?

Do Phytoplankton Evolve in Rhythm With the Earth’s Orbit of the Sun?

Molly Campbell is a science writer at Technology Networks. She holds a first-class honors degree in neuroscience. In 2021 Molly was shortlisted for the Women in Journalism Georgina Henry Award.
Learn about our editorial policies
Coccolithophores, an important constituent of the plankton, evolved following the rhythm of Earth’s orbital eccentricity. Credit: Luc Beaufort / CNRS / CEREGE.
Read time:

Complete the form below and we will email you a PDF version of "Do Phytoplankton Evolve in Rhythm With the Earth’s Orbit of the Sun? "

A new study published in Nature hypothesizes that the degree of circularity of the Earth’s orbit influences the evolution of phytoplankton.

Phytoplankton and the ocean’s chemistry

The uppermost layer of the ocean provides a home for a multitude of microscopic organisms known as phytoplankton. These single-celled microalgae are often invisible to the naked eye unless a “bloom” occurs and they accumulate in large numbers.

Just like trees and plants found on land, phytoplankton possess chlorophyl and photosynthesize, consuming carbon dioxide and releasing oxygen. Many different species of phytoplankton exist and play varying roles in the aquatic ecosystem. 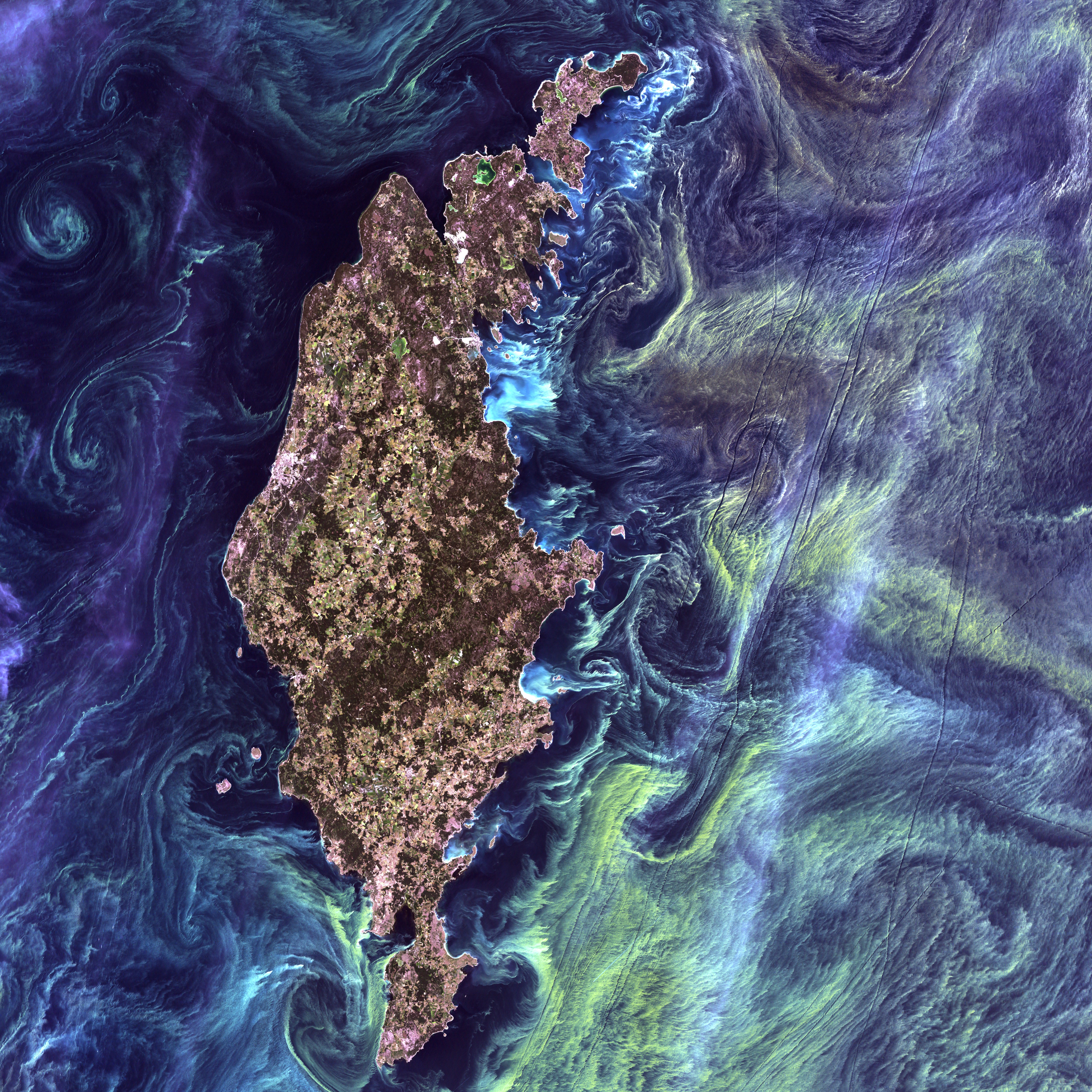 Massive congregations of greenish phytoplankton swirl in the dark water around Gotland, a Swedish island in the Baltic Sea. Credit: USGS on Unsplash.

Coccolithophores are one example of phytoplankton. “Coccolithophores are single-celled algae that produce limestone plates one-by-one inside of their cells in special compartments, and these are then pushed through the cell wall to form an exoskeleton of imbricated plates,” says Dr. Clara Bolton, researcher at the European Centre for Research and Teaching in Environmental Geoscience (CEREGE).

These limestone plates are called coccoliths. At one time, a single coccolithophore may be surrounded by 30 coccoliths, which are “dumped” into the water when the organism dies or reproduces asexually. Coccolithophores – found across different parts of the world – are estimated to be responsible for dumping 1.5 million tons of calcite into the ocean every year.

Consequently, they play a fundamental part in regulating the ocean’s chemistry and carbon cycle. Bolton explains, “Coccolithophores play a dual role in the ocean carbon cycle, because (like all plants) they take up carbon dioxide during photosynthesis to make organic matter, but they also use bicarbonate ions from seawater to produce coccoliths, a process which produces carbon dioxide.”

The fine balance between this organic carbon production and coccolith production ultimately determines whether a population of coccolithophores act as a source or sink of carbon dioxide.

“When coccoliths (made of calcium carbonate that contains carbon) sink to the seafloor and are buried in sediments, carbon is removed from the ocean-atmosphere reservoir, which can impact climate,” adds Bolton.

The burying of coccoliths in sediment allows for their preservation. Their fossils can provide scientists with insights on the evolution of coccolithophores over time, and the different factors that might have influenced such evolution.

In a new study published in Nature, Dr. Bolton and colleagues analyzed over 7 million coccolith fossils that span a time period of 2.8 million years, obtained from several locations in the tropical ocean.

The research project aimed to explore how variations in the Earth’s orbit could drive evolution. The inspiration, Bolton explains, was the “intriguing observation” that the size of coccolithophores was regularly varying over time. “These cycles were not necessarily connected to what we know about past climates,” she says.

The fossil samples were obtained from international and French scientific coring expeditions that members of the study team participated in. “Our samples are all from the tropical Indo-Pacific but cover many different environments in terms of ocean chemistry and biology. They come from the seafloor, between about 1000 m and 3000 m water depth,” says Bolton.

The coccolith samples were mounted on microscopic slides before automatic microscope techniques were utilized to capture images. As the study progressed, novel and higher-throughput methods were developed that could produce higher-resolution records from across the sites. Artificial intelligence methods that have been under development in the  lab for over 15 years were then used to identify the different forms of coccoliths and measure them. Bolton says that the study “represents an enormous amount of laboratory preparation, microscope and computing time”.

Getting your head around Earth’s orbital shapes

Bolton and colleagues found that, irrespective of where the coccolith samples were obtained from, there were long-term changes in size that were common to all sites. Coccolithophores are sensitive to even the slightest change in climate. Could this be driving the varying cycles of coccolith shapes and sizes?

“We thought about what the common driver of size changes could be and collaborated with our climate modeling colleagues to test mechanisms,” Bolton says.

Ultimately, the researchers were led to the hypothesis that changes in the Earth’s orbit could be behind the varying cycles of coccolith size and shape.

The Earth does not orbit around the sun in a circular fashion. It has an elliptical orbit, resembling an “oval” shape, rather than a circle. The amount by which the Earth’s orbit deviates away from being a circle is known as its eccentricity; the more circular the orbit, the lower the eccentricity, and vice versa. The characteristics of this orbit, Bolton explains, are not stable due to the complexity of the solar system.

“Because of its interaction with other celestial bodies, the shape of the Earth’s orbit becomes more or less elliptical (higher or lower eccentricity) following cycles of ~100,000 and ~400,000 years,” Bolton says.

When analyzing the data from their coccolith samples, the researchers found that the changes in the rhythm of the Earth’s orbit were mirrored in the size and shape of the coccoliths. They therefore hypothesize a link between the two; and this may influence the Earth’s climate.

When the Earth’s orbit is lower in eccentricity – which is the case today – the equatorial regions show little seasonal variation. “As eccentricity increases and more pronounced seasons appear near the equator, coccolithophores diversify into many specialized species, but collectively produce less limestone,” says Bolton. These changes in the production of limestone alter the ocean chemistry and carbon burial, which feeds back on the Earth’s climate.

How could the hypothesis be confirmed?

The researchers emphasize that this hypothesis remains to be proven, which would require the study of older specimens from periods where the Earth was without polar ice caps. “We could quantify the amount of carbonate produced by coccolithophores and compare it to climatic parameters,” Bolton explains.

Next, the team will conduct analyses on samples from the Pliocene and Miocene period (10-15 million years ago). “We will increase our corpus of data by measuring the carbon isotopes of the coccoliths to reveal deeper carbon mysteries” Bolton concludes.

While coccolithophores are integral oceanic calcite producers, they are merely one type of phytoplankton. It’s unclear, at this stage, whether other groups of organisms may demonstrate evolutionary changes that align with changes in eccentricity too.