Complete the form below and we will email you a PDF version of "Faster, Cheaper Way to Produce New Antibiotics" 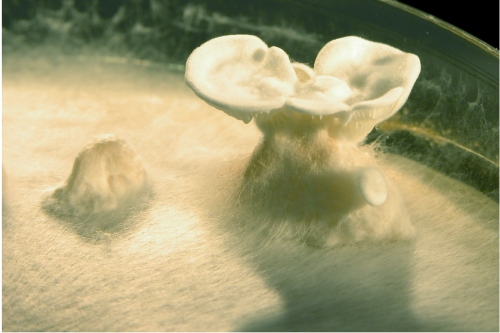 By expressing the genes involved in the production of pleuromutilin in a different type of fungus, the researchers were able to increase production by more than 2,000 per cent.

With resistance growing to existing antibiotics, there is a vital and urgent need for the discovery and development of new antibiotics that are cost effective.  Promising developments are derivatives of the antibiotic pleuromutilin, which are isolated from the mushroom Clitopilus passeckerianus.

These new compounds are some of the only new class of antibiotics to join the market recently as human therapeutics.  Furthermore, with their novel mode of action and lack of cross-resistance, pleuromutilins and their derivatives represent a class with further great potential, particularly for treating resistant strains such as methicillin-resistant Staphylococcus aureus (MRSA) and extensively drug resistant tuberculosis (XTB).

However, mushrooms are basidiomycete fungi which are not generally amenable to strain improvement and fermentation.

Therefore, in collaboration with pharmaceutical company GSK, Bristol scientists carried out research to identify the genes involved in the production of pleuromutilin.  They discovered that a seven-gene cluster is required to produce the antibiotic in C. passeckerianus.

The seven-gene pleuromutilin cluster was then reconstructed within a more industrial fungus, Aspergillus oryzae which belongs to a different group of fungi, the ascomycetes.  This resulted in a significant increase (2,106 per cent) in production.

This is the first gene cluster from a basidiomycete to be successfully expressed in an ascomycete, and paves the way for the exploitation of a metabolically rich but traditionally overlooked group of fungi.

Co-author of the research, Professor Gary Foster said: “This was a massive team effort over many years to achieve this major breakthrough.  It involved, in the School of Biological Sciences, the drug discovery team led by myself and Dr Andy Bailey, with Dr Colin Lazarus on alternative expression platforms.  In addition, significant effort came from chemists at the University of Bristol led by Professor Chris Willis and Professor Russell Cox, and collaborative scientists in GSK.

“With this development, we are now ideally placed to develop novel derivatives and new antibiotics and produce them rapidly and cost effectively – something which is desperately needed globally.”