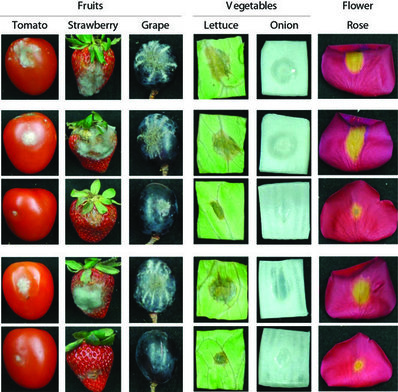 Have you ever bought strawberries or other fruits and vegetables, forgot to put them in the refrigerator and later noticed they had gray mold on some of them?

That’s Botrytis cinerea, a fungal pathogen that can infect more than 1,000 plant species, including almost every fruit and vegetable and many flowers. Wine grapes are also a notable host – in grapes the condition is known as bunch rot. It causes billions of dollars in crop loss annually.

A team of researchers, led by Hailing Jin, a University of California, Riverside professor of plant pathology and microbiology, have developed a new strategy that could provide an easy-to-use and environmentally friendly fungicide to fight B. cinerea and other fungal pathogens that harm crops.

These findings build on a paper by Jin’s group published in 2013 in the journal Science. In that paper, they outlined how they discovered the mechanism by which B. cinerea infects plants.

Many pathogens secrete protein effectors molecules to manipulate and – eventually – compromise host immunity. The researchers, led by Jin, found three years ago for the first time that B. cinerea can deliver small RNA effector molecules to the host cells to induce cross-kingdom RNA interference (RNAi) to suppress host immunity.

Building on that work, in the just-published study in Nature Plants, they discovered that such cross-kingdom RNAi is bidirectional, meaning small RNAs can flow from the pathogen to the host and from the host to the pathogen.

Furthermore, they found that B. cinerea is capable of taking up RNA molecules from the environment, which makes it possible to use such external RNAs in fungicidal sprays to manage diseases.

The researchers tested that idea and found that applying those pathogen gene-targeting RNA molecules to the surface of fruits and vegetables and flowers – they used tomato, strawberry, grape, lettuce, onion, and rose – can control gray mold diseases.

The findings outlined in the Science and Nature Plants papers have significant implications for farmers looking to control fungal pathogens. Currently, fungicides and chemical spraying are still the most common disease control strategy. But, these treatments pose serious threats to human health and environments. RNA, which is present in all living organisms, doesn’t present problems for human health and it naturally degrades in soil.

While the research focused on the fungal pathogens B. cinerea and Verticillium dahliae, another fungal pathogen that causes wild disease on dozens of trees, shrubs, vegetables, and fields crops, the researchers believe this RNAi-based technique could be used to control multiple pathogens at the same time.

While the research focused on the fungal pathogen B. cinerea, the researchers believe the technique could be used to control other fungal pathogens, such as Verticllium dahliae, which causes wild disease on dozens of trees, shrubs, vegetables, and fields crops.