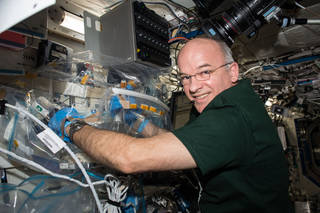 Biologists around the world routinely perform gene expression analysis to better understand living systems. Gene expression analysis examines the types and amounts of molecules produced by genes in living cells, telling us which genes are active and which are inactive at a given point in time. This reveals valuable information about the highly dynamic internal states of cells in living systems. NASA’s WetLab-2 hardware system is bringing to the International Space Station the technology to measure gene expression of biological specimens in space, and to transmit the results to researchers on Earth at the speed of light.

“WetLab-2 is truly a first,” said Macarena Parra, WetLab-2 project scientist at NASA’s Ames Research Center in California’s Silicon Valley. “Investigators using WetLab-2 will be able to analyze the first run of a spaceflight experiment and immediately apply what they learn to subsequent runs of the experiment during the same flight mission.  It will allow us to accelerate the pace of research on the station while saving time and cost.”

Currently, life science research aboard the space station must follow pre-set plans: A rocket carries the experiment into space, an astronaut follows the plan and then sends samples to Earth for analysis. If the post-flight analysis shows that something unusual or unpredicted occurred in space, the researcher will want to further study those phenomena, but this requires planning an entirely new experiment and waiting for an opportunity to fly it to the station.

WetLab-2 employs a standard method of measuring gene expression called Quantitative Polymerase Chain Reaction, or qPCR, which involves extracting certain types of ribonucleic acid (RNA) molecules from biological samples and then measuring the amounts extracted. RNA molecules are found inside cells, and they play key roles in the basic functions of living cells, such as making cellular proteins. Today, qPCR analysis is performed in many biology labs around in the world. The WetLab-2 system uses a commercially available instrument to perform the qPCR analysis on the space station.

Microgravity complicates even the simplest laboratory procedures, such as adding liquid to a test tube. Additionally, on the station, a complete pantry of chemicals is not available, and astronauts maintain a packed schedule. To address these constraints, the WetLab-2 team developed a new method to allow station crew members to extract RNA from multiple types of biological specimens in less than 30 minutes.

WetLab-2 will enable a broad range of life science investigations in space, such as analysis of genes that indicate infectious disease, cell stress, changes in cell cycle growth and development, and genetic abnormality. Researchers also can use the system for real-time analyses of air, surface and water samples to monitor environmental conditions and crew health on the station.

“The ultimate goal of the WetLab-2 system is to help humans live and work in space,” said Schonfeld. “This system will help researchers identify changes in gene expression. This can help us determine how to mitigate negative effects of spaceflight and add to our knowledge about how genes work.”

The WetLab-2 system was developed at Ames and funded by the International Space Station Program at NASA’s Johnson Space Center in Houston.

WetLab-2 launched April 8 aboard the eighth SpaceX cargo resupply mission to the space station. The goal of the first flight is to validate system performance. After successful completion of the validation study, WetLab-2 will be available to speed delivery of gene expression data to principal investigators on Earth for academic, commercial and NASA research.

The space station serves as the world's leading laboratory where researchers conduct cutting-edge research and technology development that will enable human and robotic exploration of destinations beyond low-Earth orbit, including asteroids and Mars.