Knocking out one or both crucial regulatory genes caused cleft lip, skin barrier defects, and a host of other developmental problems in mice, according to new research from the Perelman School of Medicine at the University of Pennsylvania, hinting that abnormalities in these molecular pathways could underlie many birth defects that are presently not well understood. The two closely related regulatory genes are active in the normal development of mammals and govern how RNAs produced from the genes are joined to make final versions of the encoded protein, a process called alternative splicing.

The study concerns the genes Esrp1 andEsrp2, which have become the focus of much research in recent years, due to their evident roles in development and cancer.

“Clearly there are many important roles for these genes in facial, skin and, organ development, and we’re only just starting to catalogue them,” said Russ P. Carstens, MD, an associate professor of Medicine (Renal-Electrolyte and Hypertension Division) and Genetics. 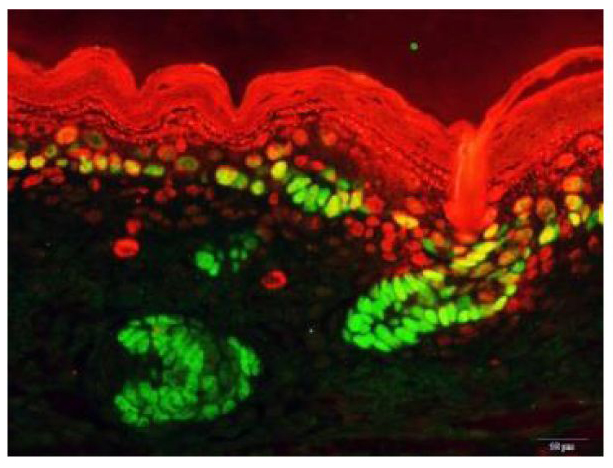 Carstens and his colleagues were the first to identify Esrp1 and Esrp2,in 2009, as molecular switches for alternative splicing, in which the initial RNA transcript of a gene’s DNA code is cut up and put back together in different arrangements. Alternative splicing affects most mammalian genes, and effectively enables the production of distinct protein variants (called isoforms) from the same gene.

Which protein isoforms are produced depends on the cell type and other physiological circumstances. Esrp1 and Esrp2 are active specifically in epithelial cells, which form the skin, the inner layers of the gut and lung, and other tissues in the body. In those cells the Esrp1 and Esrp2 proteins enforce epithelial-specific splicing isoforms for hundreds of different genes, as Carstens and his team have shown in studies since 2009.

What’s more, the researchers discovered two years ago that the suppression of Esrp activity helps to enable a process called the epithelial-mesenchymal transition (EMT), in which epithelial cells acquire properties allowing them to detach and develop into new tissue. EMT is crucial for normal embryonic development, but also operates in wound healing, and when abnormally switched on, can enable the spread of tumor cells.

These early studies were in laboratory-cultured cells. In the eLife study, Carstens and his colleagues engineered mice without Esrp1, Esrp2, or both. They found that mice lacking Esrp1 alonewere born alive but with cleft palate and cleft lip deformities that prevented feeding. All died within hours.

“This finding really shows that epithelial-specific splicing is important for the normal development of the face and palate—cleft lip and palate are among the most common congenital conditions,” Carstens said.

Mice lacking only Esrp2, which is likely to have evolved as a backup duplicated copy to cover some functions of Esrp1, appeared normal, as long as Esrp1 was present.

Mice lacking both genes displayed more pronounced abnormalities. Their embryos had more profound defects than were seen in the Esrp1-null mice, including craniofacial and forelimb defects, and the complete absence of lungs and salivary glands—two organs made up largely of epithelial cells.

In collaboration with Yi Xing from UCLA, the team catalogued and analyzed how gene expression patterns in skin cells differed among the Esrp knockouts and found hundreds of significant changes.

The analysis suggested, among other findings, that the lack of both Esrp1 and Esrp2 leads to serious defects in skin development. Because mice lacking both genes would not be born alive, the scientists followed up this lead by making “conditional knockout mice,” in which Esrp1 and Esrp2 activity was normal early in fetal development, but then was switched off in skin epithelial cells.

The resulting mice perished within a day of being born. “They basically became dehydrated and died because their skin couldn’t keep water and fluid in,” Carstens said. These flaws, called epithelial barrier defects, feature in human disorders, including in the skin, gut, and lung. Carstens hopes that further study of Esrp1 and Esrp2, and in particular the proteins whose splice isoforms they control, will uncover useful clues about how these defects arise and how they might be remedied.

He also hopes that the Esrp1-knockout mice will prove to be a valuable new model for studying cleft lip. “There have been many knockout mouse models of cleft palate, but very few of cleft lip, which is actually the more common defect in humans,” Carstens said. The team is now working on other conditional knockout and gene expression studies of Esrp1 and Esrp2’s roles in the face, lungs, gut, kidney, and other organs.