Malignancies caused by radiation therapy are a major cause of mortality in childhood cancer patients and affect approximately 10 percent of long-term survivors, depending on diagnosis and prognosis. These secondary malignancies arise from DNA injury following radiation therapy and can be aggressive and challenging to treat.

While they can also occur in adults, experts are recognizing that they are more common in children. 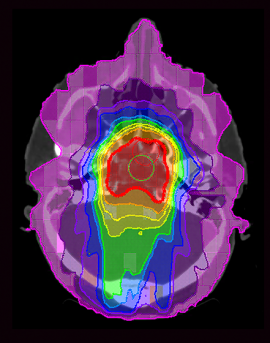 In the study a team of international scientists, headed by senior author Jean Nakamura, MD, of UCSF, conducted an analysis of tumors in mice that were caused by both exposure to radiation and genetic mutations.

The researchers compared the prevalence of cancer in normal mice to those with a mutation in the Nf1 gene, which encodes a tumor-suppressing protein called neurofibromin. Children born with mutations in this gene have neurofibromatosis 1, a condition that predisposes them to tumors. In order to parallel the effects of radiation therapy on pediatric patients, young mice underwent focused radiation targeted to the abdominal wall. The dosing was similar to that received by patients.

After radiation the Nf1 mice harbored more tumors and had shorter lifespans than the normal mice.

“Comparing malignancies from two different genetic backgrounds helps us understand which genetic alterations are attributable to radiation and which genetic alterations are attributable to the germline mutations, those mutations present at birth,” said Nakamura, associate professor of radiation oncology in the UCSF School of Medicine and a physician at UCSF Benioff Children’s Hospital San Francisco.

The scientists sequenced malignancies from 19 mice, of which 15 tumors occurred in Nf1 mice and seven in normal mice, and identified common mutational signatures, irrespective of tumor type and genetic background.

The researchers looked at sarcomas, tumors usually arising from muscle or bone that are common secondary malignancies, and found that those of the Nf1 mice had fewer changes in DNA sequence than the normal mice. They also found that the cancers of the Nf1 mice were significantly more likely to have lost large segments of individual chromosomes compared to the normal mice. These findings indicate that germline mutations in Nf1 influence the numbers and types of genetic alterations found in tumors. Nakamura and her colleagues now are analyzing radiation-induced malignancies from pediatric patients for the mutation patterns they discovered in the mice.

“If we can identify whether germline mutations are contributing to cancer development in pediatric patients, we have the potential to personalize cancer therapy and health management approaches to help these patients enjoy long-term health,” said Nakamura. “Since individual patients have individual genetic profiles and different radiation exposure, we might be able to tailor medical care to integrate this information, rather than offering the same treatment to all children with the same diagnosis.”

Nakamura hopes that the results of the study may enable scientists to understand the precise molecular steps and sources that contribute to cancer formation and block the process at the point at which it is easiest to manipulate.

“In the future, we may find that some of the mutational signatures that we identified reflect molecular deficiencies that we can prevent or correct,” she said.

“One possibility is developing drugs to protect or reinforce genetic integrity during radiation exposure, as well as afterwards.”