A research team at the University College London (UCL) Genetics Institute has conducted a genome-wide association study (GWAS) that provides novel insight into the evolution of variety in human skin color.

The study, published in the journal Nature Communications, analyzed pigmentation in a population of more than 6,000 Latin American volunteers, who have a mix of Native American, European and African ancestry. “Features such as skin color are among the most prominently observed traits in humans, and show a huge diversity, so we were interested in studying their genetic basis to see how they evolved,” explains Kaustubh Adhikari, joint first author (UCL Genetics Institute). “There are many studies of pigmentation in Western Europeans and White Americans, but very few in other ethnicities such as Latin American.”

For each volunteer, the level of melanin in the skin was quantified using a reflectance spectrophotometer, and a high-quality photograph was taken to measure the color of the eyes.

The scientists discovered a variation in the gene MFSD12 that is linked to lighter skin color. “Notably, the genetic variant that we discovered is almost exclusively present in East Asians and Native Americans but absent everywhere else,” adds Javier Mendoza-Revilla, joint first author (UCL Genetics Institute). 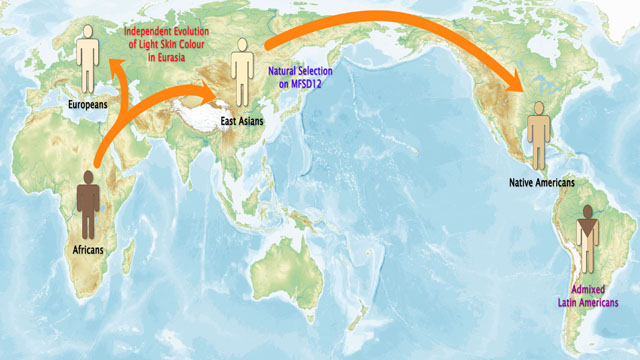 ﻿An illustration of the key findings of the GWAS study. Credit: University College London Institute of Genetics

In addition to shining light on the events of the past, the outcome of the GWAS study may have significant implications for the future skin cancer research. “The biological process leading to human pigmentation plays an important role in the effects of sun exposure and ultraviolet absorption, as well as skin cancer. It is therefore not surprising that several genetic variants that are involved in pigmentation have been linked with a predisposition for various skin cancers,” comments Andrés Ruiz-Linares, Professor of Human Genetics at the Genetics, Evolution & Environment (GEE) department at UCL.

This study is part of an international collaboration from researchers in Latin America and the UK, and Adhikari states that the next steps of the project are already in progress. “We are currently working with a team of geneticists from Fudan University in China to evaluate whether the novel genetic variant identified in Latin Americans also has an effect on skin color in Asia.” On a separate venture, as part of The Consortium for the Analysis of the Diversity and Evolution of Latin America (CANDELA) project founded almost ten years ago, the research team will conduct further association studies to elucidate the genetic basis of other physical appearance traits.