A single-celled alga undergoes genome surgery to remove non-essential parts. This can lead to a most efficient cellular factory for producing sustainable biofuels from sunlight and carbon dioxide.

Researchers from the Qingdao Institute of BioEnergy and Bioprocess Technology (QIBEBT) of the Chinese Academy of Sciences (CAS) have stripped hundred-kilobase genome from a type of oil-producing microalgae, knocking out genes non-essential for it to function. By doing so, they have created a "genome scalpel" that can trim microalgal genomes rapidly and creatively.

The 'minimal genome' microalgae produced is potentially useful as a model organism for further study of the molecular and biological function of every gene, or as a 'chassis' strain for synthetic biologists to augment for customized production of biomolecules such as biofuels or bioplastics.

Creation of a 'minimal genome' -- a genome stripped of all duplicated or apparently non-functional 'junk genes' -- can be very useful for investigating fundamental questions about genetic function and for designing cell factories that produce valuable compounds.

Such minimal genomes have been created for simple organisms, but rarely for eukaryotic organisms, including algae or plants. In higher eukaryotes, "junk" regions can take up to 70 percent of the genome. Deleting what only appears to be "junk genes" in fact can have harmful effects on the organism or even kill it.

For the first time, researchers from QIBEBT have produced a genome with targeted deletions, of hundred kilobases in size each, for a type of algae called Nannochloropsis oceanica. 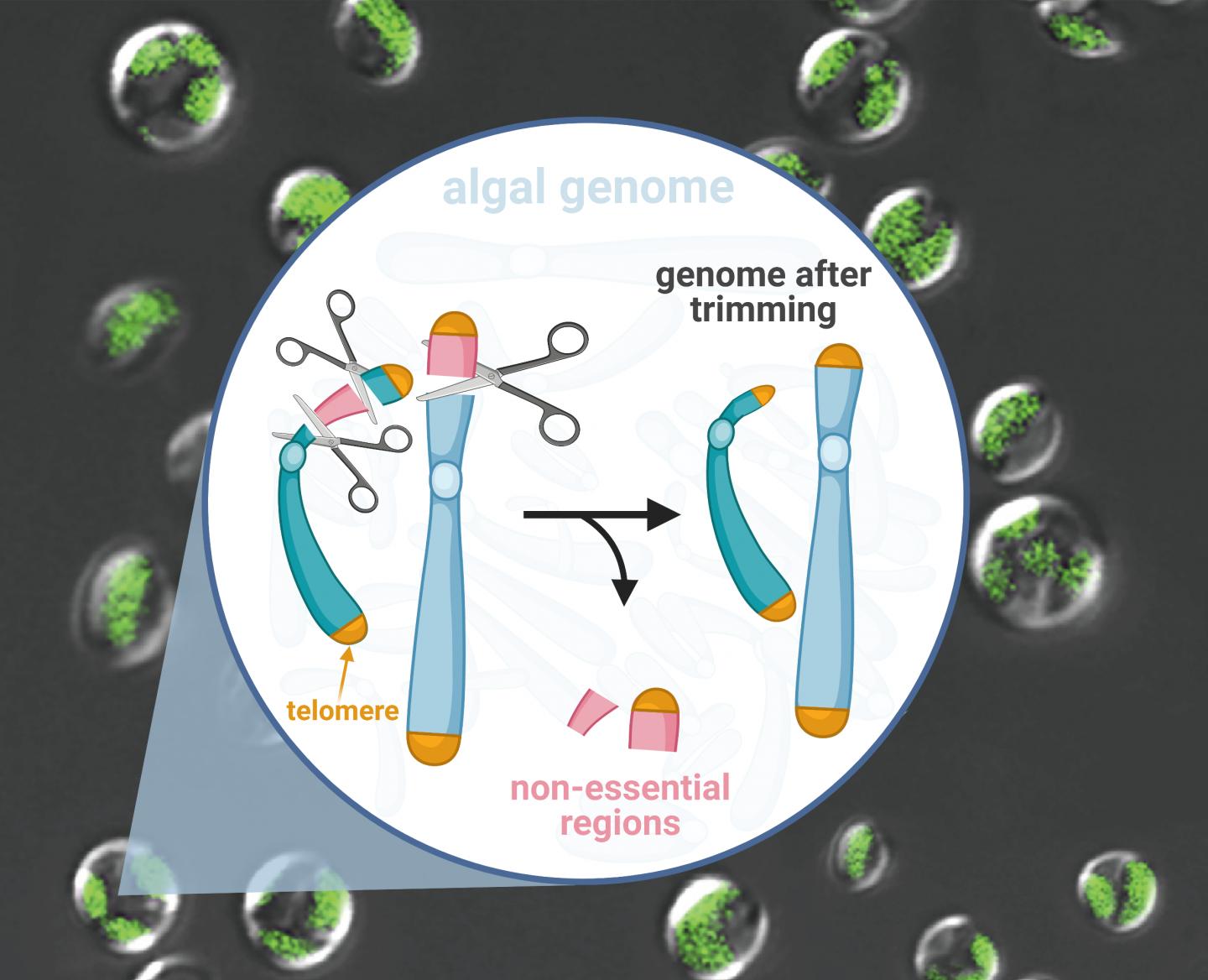 N. oceanica are microalgae (single-celled algae) that have tremendous potential for production of biofuels, biomaterials and other platform chemicals in a renewable and sustainable manner while reducing greenhouse gas emissions. However, realizing the potential of these microalgae requires extensive genetic engineering of the organism to maximize yields and minimize production costs.

The QIBEBT team first identified the non-essential chromosomal regions -- ones whose genes were rarely expressed, or activated. They identified ten such 'low-expression regions', or LERs. They then used CRISPR-Cas9 gene-editing technique to snip out two of the largest LERs -- over 200 kilobases in size.

"Despite the all snipping, the microalgae still showed essentially normal growth, lipid content, fatty acid saturation levels and photosynthesis," said study first-author WANG Qintao, of the Single-Cell Center (SCC) in the QIBEBT. "In some cases, there was even a slightly higher growth rate and biomass productivity than the organism in the wild."

"We interestingly found normal telomeres in the telomere-deletion mutants of Chromosome 30," said the corresponding author XU Jian, of the SCC in QIBEBT. "This phenomenon implies the losing of distal part of chromosome may induce telomere regeneration."

Already, the substantially snipped genome should serve as a closer-to-minimal genome in Nannochloropsis, which can serve as the chassis strain for customized production of biomolecules using further metabolic engineering atop this chassis.

Now that they have proven they can strip down the genome of such a complex eukaryote, the researchers now want to see if they can snip out still further LERs and other non-lethal regions, to craft a fully minimal Nannochloropsis that makes biofuels from CO2 with the highest efficiency.