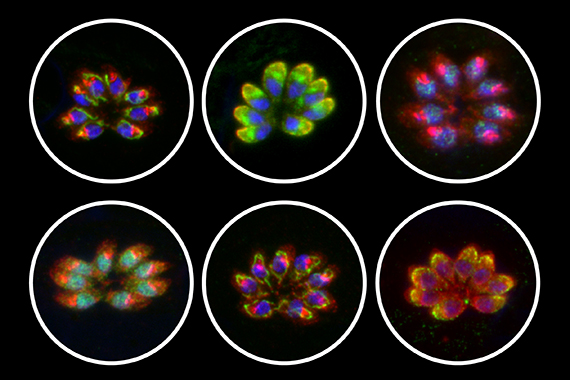 Whitehead Institute researchers have conducted the first genome-wide screen in Apicomplexa, a phylum of single-celled parasites that cause malaria, babesiosis, cryptosporidiosis, and toxoplasmosis. The screen sheds light into the vast, unstudied reaches of parasite genomes, uncovering for instance a protein common to all apicomplexans.

“There’s never been a really good way of looking at the function of all genes in any apicomplexan parasite,” says Whitehead Fellow Sebastian Lourido. “We’ve introduced a method to assess the function of the entire genome. This technology can be used to study a variety of topics, from nutrient acquisition and responses to immune pressures to epistasis and genetic interactions. This is an important leap forward in what’s possible to investigate in these parasites.”

The Centers for Disease Control and Prevention (CDC) estimates that more than 60 million people in the United States are infected with Toxoplasma gondii. Transmission can occur by ingesting oocytes from infected cat feces or by eating undercooked meat containing Toxoplasma cysts. After infection, some healthy people experience a month or more of flu-like symptoms, but the disease can cause seizures and potentially fatal encephalitis in the immunocompromised, including patients receiving transplants, those with HIV/AIDS, cancer patients, the elderly, and young children. If a mother is infected during pregnancy, she can transmit the parasite to her fetus, which can result in miscarriage, stillbirth, brain or eye damage, or hearing loss in her child.

Although toxoplasmosis can be a serious disease, another apicomplexan, the malaria-causing parasite Plasmodium falciparum, killed more than 400,000 people in 2015, according to the World Health Organization (WHO). Because T. gondii and P. falciparum are closely related, T. gondii can serve as a model organism for researching its more deadly cousin. However, studies of T. gondii have been hampered by scientists’ inability to knock down genes quickly and efficiently. RNA interference (RNAi), an effective tool to assess gene function in many organisms, is largely ineffective in apicomplexans, while random mutagenesis is difficult to interpret because the altered gene is difficult to identify. Genetic crosses are also hard to implement because the parasite’s sexual stages only occur in cats.

Further, altering the T. gondii genome using the CRISPR/Cas9 editing system was curtailed by the Cas9 enzyme’s toxicity. To overcome this hurdle, scientists in Lourido’s lab created a “decoy” single-guide RNA that effectively reduces Cas9’s hyperactivity on the genome. Using this “subdued” CRISPR/Cas9 system, the researchers were able to disrupt each of T. gondii’s 8,158 genes and study their individual functions. The approach identified roughly 200 genes present in all apicomplexans that contribute to the parasites’ fitness during infection of human cells.

One of these genes codes for a protein that the team dubbed claudin-like apicomplexan microneme protein (CLAMP), which has a strong effect on the parasite’s invasion of host cells. To further analyze the protein’s role and confirm its necessity for another apicomplexan, the team worked with the lab of Jacquin Niles at MIT to knock the protein down in P. falciparum. Without functional CLAMP, the malaria parasites were unable to grow in red blood cells. The team’s findings are described online this week in the journal Cell.

Although the genome-wide CRISPR/Cas9 system works well in T. gondii, an equivalent strategy is still missing for P. falciparum.

“Malaria is really difficult to manipulate in the same way,” says Diego Huet, a postdoctoral researcher in the Lourido lab and co-author of the Cell paper. “Because its genome is adenine (A)- and thymine (T)-rich, it is difficult to generate the cuts where you want. Malaria parasites also lack the non-homologous end-joining pathway of DNA repair, requiring a repair template when making cuts with CRISPR/Cas9. These issues represent a technical hurdle to similar genome-wide approaches in this parasite, making Toxoplasma an even more important model for malaria. There is so much we can study.”

Saima Sidik, who co-authored the study and is a research assistant in the Lourido lab agrees, adding, “Now we can start altering the environment the parasites are in and see how they react. We can permute the environment by adding drugs, adding immune pressures, or trying different cell types for the parasites to invade. We can knock down the whole genome in a week, whereas before we could only do maybe one gene a month. With CRISPR screening, the possibilities are endless.”