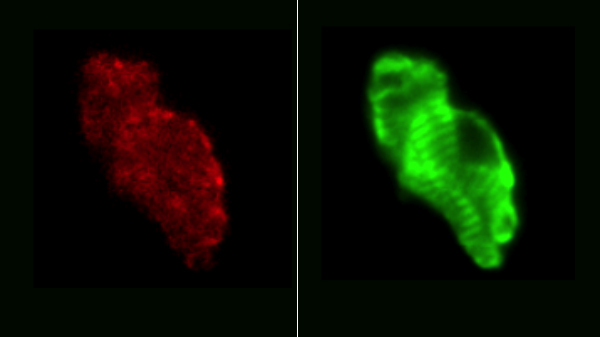 It’s not simple, making a heart. In the womb, the organ begins as a tube, sprouts bead-like lumps, folds in on itself and eventually morphs into the more familiar-looking four-chambered structure.

But exactly how heart cells follow their genetic programming to create an intricate, life-sustaining pump remains something of a mystery.

“We would love to have a blueprint that tells us how the heart gets from start to finish,” says cardiology researcher Jonathan Seidman, the Henrietta B. and Frederick H. Bugher Foundation Professor of Genetics at Harvard Medical School.

Seidman and colleagues from HMS and beyond, including senior investigator Christine Seidman, the Thomas W. Smith Professor of Medicine at HMS, have just filled in that sketchy diagram a little more.

“It’s the first opportunity we’ve had to look at a map of the heart with 100-cell resolution,” said Jon Seidman.

The results, reported Nov. 10 in Developmental Cell, help clarify which cell types are present in various parts of the heart at each time period and uncover a previously unknown cell type. The researchers also describe errors in specific cell types in mice with a genetic mutation that causes congenital heart defects in humans.

“The study provides both a temporal and spatial atlas that plots the development of the different cell populations in each of the four chambers,” Jon Seidman said. “The converse is also true: By looking at a cell’s RNA expression, we can gather clues to its origins.”

Mouse hearts, of course, are not human hearts. For instance, adult mouse hearts are 3,000 times smaller than ours and beat 10 times faster. However, many features are “remarkably conserved” between the two species, the authors say, including the organs’ four-chambered structure, the electrical signals that direct muscle contraction and relaxation and the molecules that are involved in muscle function. This builds the team’s confidence that their findings will ultimately inform knowledge of the human cardiovascular system.

As the researchers catalogued both new and known genetic markers to identify cells from specific locations and developmental stages, they noticed that one group of cells unexpectedly displayed a blend of genes typically found in either myocardial cells or fibroblasts. The team is now investigating the role of these unusual cells in heart maturation.

The ability to track individual cells and cell types in the developing heart should also help researchers study how gene mutations change the way each cell population matures, the authors said.

“The hope is that now we’re beginning to understand at a single-cell level how perturbations in genes and cells lead to changes in cardiac structure and clarify what the important steps are for how the heart is built,” said Seidman.

Although chances are slim that the researchers’ observations will lead to new therapeutic approaches anytime soon, Seidman said they do plan to investigate how particular defects that lead to congenital heart disease “actually cause the changes that pediatric cardiologists have been seeing for years.”

Story from Harvard Medical School. Original piece written by Stephanie Dutchen. Please note: The content above may have been edited to ensure it is in keeping with Technology Networks’ style and length guidelines.