How a Kernel Got Naked and Corn Became King

How a Kernel Got Naked and Corn Became King

University of Wisconsin-Madison researchers have found that just a single letter change in the genetic script of corn's ancestor, teosinte, helped make it all possible.

UW-Madison genetics Professor John Doebley and a team of researchers describe how, during the domestication of corn, a single nucleotide change in the teosinte glume architectural gene (tga1) stripped away the hard, inedible casing of this wild grass, ultimately exposing the edible golden kernel. 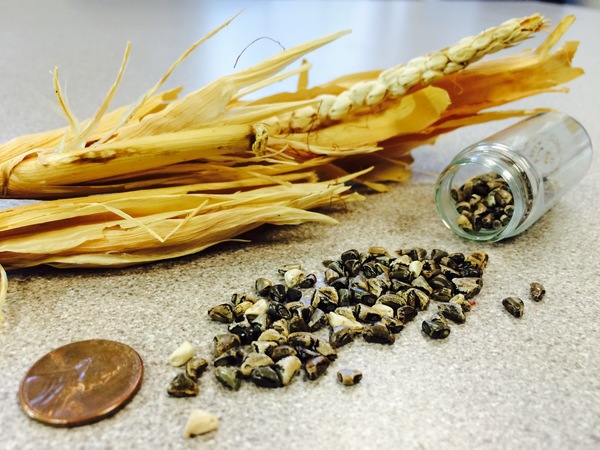 "A huge proportion of the world is economically dependent on the crop and understanding how it was constructed 10,000 years ago is more than just intellectually satisfying," Doebley says. He has spent his long career studying the evolution of maize, the plant from which corn grows. "It tells us something about how important this genetic change was."

Seen side by side, maize and teosinte do not look as if they belong on the same family tree. Teosinte is branched and bushy; its miniscule "ears" bear a stronger resemblance to wheat and contain just 10 to 12 kernels. Maize, meanwhile, is tall and stalked and grows massive ears containing hundreds of kernels. Yet research by Doebley years ago traced maize's roots to a weedy form of teosinte in a valley in southwestern Mexico.

"The big question is, when we look out the window and see a diversity of forms in the plants and animals around us, what were the genetic changes that took place to make all of that happen?" Doebley says. "Two closely related plants, why do they have a different shape of leaf; or two people, why is one a little taller?"

The answer often lies in mutations, the currency of evolution. Sometimes single letters are changed in the genome of a species, while other times, whole paragraphs are lifted or moved around. Sometimes, these changes don't alter the meaning of the story, while other times they do. When those changes are beneficial, that altered copy survives the test of time. Sometimes that means the creation of a whole new species.

In the case of maize, in the process of domesticating it for food, humans decided which mutations were good and which to eliminate by growing more of the plants they preferred. Previous studies from Doebley's lab had identified the tga1 gene as responsible for the transition from encased to exposed kernels, but until now, no one knew just how.

The research team began with the information it had: There were six potential mutations in the gene that could explain the change. Researchers investigated these suspects by studying large numbers of corn and teosinte genomes and learned that just one mutation was consistently different between the two plants.

"Knowing that was the important one, we tried to characterize how it altered the function of the gene," says Doebley.

The team learned that the single letter change led to a difference in the protein made by tga1. Genes provide the codes to make proteins, which are the machines that do the work of cells. The researchers then embarked on a series of studies to determine how that altered protein operated.

"A series of experiments showed that this particular gene, tga1, is a master regulatory gene — a conductor of the orchestra," says Doebley. The protein made by the gene influences numerous characteristics of teosinte by determining which other genes get turned on and off. By changing the gene, and thus, the protein, the mutation altered the way the conductor was leading individual musicians, affecting the entire orchestra.

"Each musician is a target gene and the conductor is telling each one what to play and how loud to play," says Doebley.

In this instance, the mutation caused the conductor to quiet its musicians, which prevented the hard fruitcase from surrounding the teosinte kernel and instead shuttled it to the core, or cob, of the ear.

"So, the kernel ends up naked, uncovered and exposed on the surface of the corn cob, to be eaten," Doebley says. This enabled corn to become a driver of trade and sustenance for billions of people and animals around the world.

The study also helps inform existing questions in the evolution world about what kinds of genetic changes lead to dramatic differences in the form and function of species. These changes first inspired Charles Darwin to consider the idea of adaptive evolution — evolution driven by natural selection — and he, too, studied domesticated plants and animals in coming to his conclusions. At UW-Madison, Professor of Genetics Sean Carroll leads studies of adaptive evolution.

In the evolution of maize, a small change in DNA led to a large change in form, and a change to the function of a single protein controlling the actions of genes caused the dramatic effect.

"When I was in graduate school, nothing like this could be done," says Doebley. "We didn't even know that a gene was an operationally defined unit that behaved in certain ways at a molecular level, and now we can ... find those genes that control differences in a species. Over the last 50 years, we have gained the ability to answer biological questions and changes in profound ways that I could not have imagined back then."