How Did Psychiatric Disorders Evolve?

How Did Psychiatric Disorders Evolve?

Complete the form below and we will email you a PDF version of "How Did Psychiatric Disorders Evolve?"

How and why human-unique characteristics such as highly social behavior, languages and complex culture have evolved is a long-standing question. A research team led by Tohoku University in Japan has revealed the evolution of a gene related to such human-unique psychiatric traits.

PhD candidate Daiki Sato and Professor Masakado Kawata have discovered SLC18A1 (VMAT1), which encodes vesicular monoamine transporter 1, as one of the genes evolved through natural selection in the human lineage. VMAT1 is mainly involved in the transport of neurochemicals, such as serotonin and dopamine in the body, and its malfunction leads to various psychiatric disorders. VMAT1 has variants consisting of two different amino acids, threonine (136Thr) and isoleucine (136Ile), at site 136.

Several studies have shown that these variants are associated with psychiatric disorders, including schizophrenia, bipolar disorder, anxiety, and neuroticism (a personality trait). It has been known that individuals with 136Thr tend to be more anxious and more depressed and have higher neuroticism scores. They showed that other mammals have 136Asn at this site but 136Thr had been favored over 136Asn during human evolution. Moreover, the 136Ile variant had originated nearly at the Out-of-Africa migration, and then, both 136Thr and 136Ile variants have been positively maintained by natural selection in non-African populations. 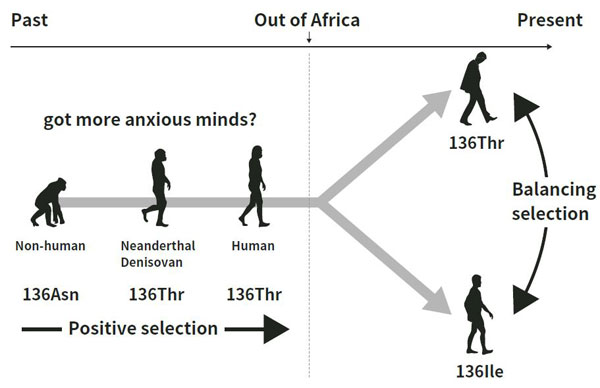 The study by Sato and Kawata indicates that natural selection has possibly shaped our psychiatric traits and maintained its diversity. The results provide two important implications for human psychiatric evolution. First, through positive selection, the evolution from Asn to Thr at site 136 on SLC18A1 was favored by natural selection during the evolution from ancestral primates to humans, although individuals with 136Thr are more anxious and have more depressed minds.

Second, they showed that the two variants of 136Thr and 136Ile have been maintained by natural selection using several population genetic methods. Any form of natural selection that maintains genetic diversity within populations is called "balancing selection". Individual differences in psychiatric traits can be observed in any human population, and some personality traits are also found in non-human primates. This suggests the possibility that a part of genetic diversity associated with personality traits and/or psychiatric disorders are maintained by balancing selection, although such selective pressure is often weak and difficult to detect.

This article has been republished from materials provided by Tohoku University. Note: material may have been edited for length and content. For further information, please contact the cited source.