Invaders, pirates, warriors – the history books taught us that Vikings were brutal predators who travelled by sea from Scandinavia to pillage and raid their way across Europe and beyond.

Now cutting-edge DNA sequencing of more than 400 Viking skeletons from archaeological sites scattered across Europe and Greenland will rewrite the history books as it has shown:

The six-year research project, published in Nature, debunks the modern image of Vikings and was led by Professor Eske Willerslev, a Fellow of St John’s College, University of Cambridge, and director of The Lundbeck Foundation GeoGenetics Centre, University of Copenhagen. 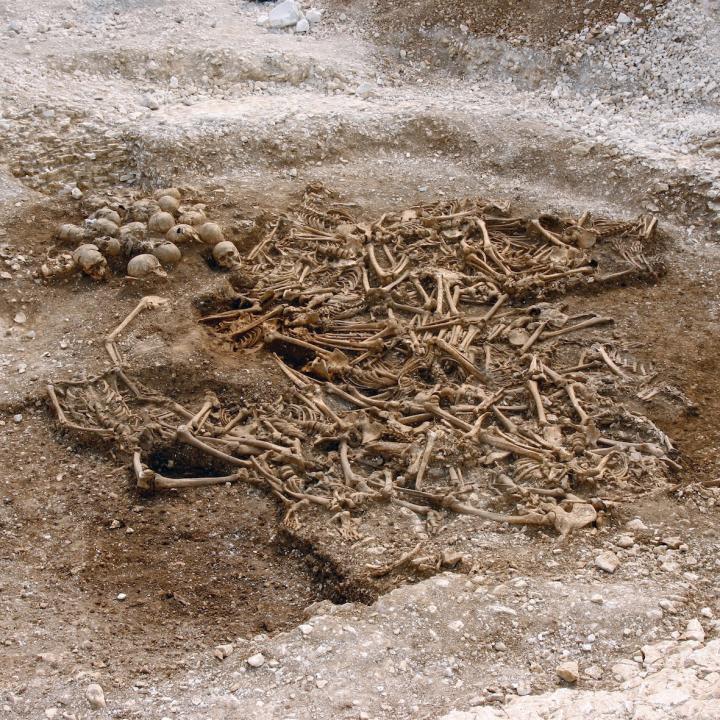 A mass grave of around 50 headless Vikings from a site in Dorset, UK. Some of these remains were used for DNA analysis. Credit: Dorset County Council/Oxford Archaeology.

He said: “We have this image of well-connected Vikings mixing with each other, trading and going on raiding parties to fight Kings across Europe because this is what we see on television and read in books – but genetically we have shown for the first time that it wasn’t that kind of world. This study changes the perception of who a Viking actually was – no one could have predicted these significant gene flows into Scandinavia from Southern Europe and Asia happened before and during the Viking Age.”

The word Viking comes from the Scandinavian term ‘vikingr’ meaning ‘pirate’. The Viking Age generally refers to the period from A.D. 800, a few years after the earliest recorded raid, until the 1050s, a few years before the Norman Conquest of England in 1066. The Vikings changed the political and genetic course of Europe and beyond: Cnut the Great became the King of England, Leif Eriksson is believed to have been the first European to reach North America – 500 years before Christopher Columbus - and Olaf Tryggvason is credited with taking Christianity to Norway. Many expeditions involved raiding monasteries and cities along the coastal settlements of Europe but the goal of trading goods like fur, tusks and seal fat were often the more pragmatic aim.

Professor Willerslev added: “We didn’t know genetically what they actually looked like until now. We found genetic differences between different Viking populations within Scandinavia which shows Viking groups in the region were far more isolated than previously believed. Our research even debunks the modern image of Vikings with blonde hair as many had brown hair and were influenced by genetic influx from the outside of Scandinavia.”

The team of international academics sequenced the whole genomes of 442 mostly Viking Age men, women, children and babies from their teeth and petrous bones found in Viking cemeteries. They analysed the DNA from the remains from a boat burial in Estonia and discovered four Viking brothers died the same day. The scientists have also revealed male skeletons from a Viking burial site in Orkney, Scotland, were not actually genetically Vikings despite being buried with swords and other Viking memorabilia.

Dr Ashot Margaryan, Assistant Professor at the Section for Evolutionary Genomics, Globe Institute, University of Copenhagen and first author of the paper, said: “We carried out the largest ever DNA analysis of Viking remains to explore how they fit into the genetic picture of Ancient Europeans before the Viking Age. The results were startling and some answer long-standing historical questions and confirm previous assumptions that lacked evidence.

“We determined that a Viking raiding party expedition included close family members as we discovered four brothers in one boat burial in Estonia who died the same day. The rest of the occupants of the boat were genetically similar suggesting that they all likely came from a small town or village somewhere in Sweden.”

DNA from the Viking remains were shotgun sequenced from sites in Greenland, Ukraine, The United Kingdom, Scandinavia, Poland and Russia.

Professor Martin Sikora, a lead author of the paper and an Associate Professor at the Centre for GeoGenetics, University of Copenhagen, said: “We found that Vikings weren’t just Scandinavians in their genetic ancestry, as we analysed genetic influences in their DNA from Southern Europe and Asia which has never been contemplated before. Many Vikings have high levels of non-Scandinavian ancestry, both within and outside Scandinavia, which suggest ongoing gene flow across Europe.”

The team’s analysis also found that genetically Pictish people ‘became’ Vikings without genetically mixing with Scandinavians. The Picts were Celtic-speaking people who lived in what is today eastern and northern Scotland during the Late British Iron Age and Early Medieval periods.

Dr Daniel Lawson, lead author from The University of Bristol, explained: “Individuals with two genetically British parents who had Viking burials were found in Orkney and Norway. This is a different side of the cultural relationship from Viking raiding and pillaging.”

The Viking Age altered the political, cultural and demographic map of Europe in ways that are still evident today in place names, surnames and modern genetics.

Professor Søren Sindbæk, an archaeologist from Moesgaard Museum in Denmark who collaborated on the ground-breaking paper, explained: “Scandinavian diasporas established trade and settlement stretching from the American continent to the Asian steppe. They exported ideas, technologies, language, beliefs and practices and developed new socio-political structures. Importantly our results show that ‘Viking’ identity was not limited to people with Scandinavian genetic ancestry. Two Orkney skeletons who were buried with Viking swords in Viking style graves are genetically similar to present-day Irish and Scottish people and could be the earliest Pictish genomes ever studied.”

Assistant Professor Fernando Racimo, also a lead author based at the GeoGenetics Centre in the University of Copenhagen, stressed how valuable the dataset is for the study of the complex traits and natural selection in the past. He explained: This is the first time we can take a detailed look at the evolution of variants under natural selection in the last 2,000 years of European history. The Viking genomes allow us to disentangle how selection unfolded before, during and after the Viking movements across Europe, affecting genes associated with important traits like immunity, pigmentation and metabolism. We can also begin to infer the physical appearance of ancient Vikings and compare them to Scandinavians today.” 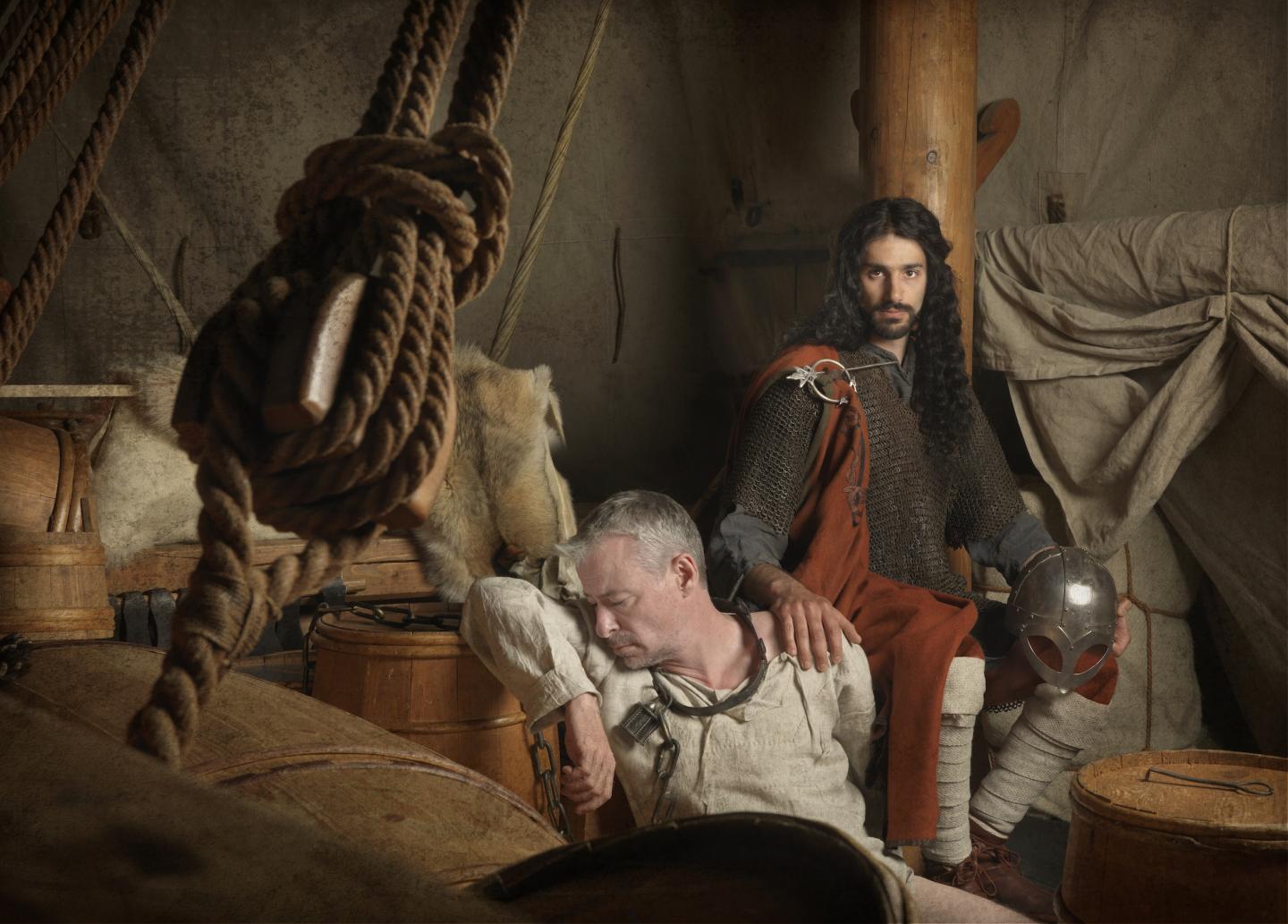 The genetic legacy of the Viking Age lives on today with six per cent of people of the UK population predicted to have Viking DNA in their genes compared to 10 per cent in Sweden.

Professor Willeslev concluded: “The results change the perception of who a Viking actually was. The history books will need to be updated."