Mitochondrial DNA Is Working Its Way Into the Human Genome

Molly Campbell is a senior science writer at Technology Networks. She holds a first-class honors degree in neuroscience. In 2021 Molly was shortlisted for the Women in Journalism Georgina Henry Award.
Learn about our editorial policies
Credit: SkieTheAce from Pixabay.

Scientists at the University of Cambridge and Queen Mary University of London have discovered that mitochondrial DNA can make its way into nuclear DNA. The study is published in Nature.

The batteries of a cell

Mitochondria are often referred to as the “powerhouses” or “batteries” of a cell, due to their role in energy conversion, among other critical molecular processes. They possess their own circular DNA called mitochondrial DNA (mtDNA), which is particularly interesting to scientists due to its distinct properties, such as a high rate of polymorphisms and mutations.

Another unique feature of mtDNA is that it is inherited by offspring via the maternal line – i.e., the DNA is passed down from our mother, not our father. This characteristic of mitochondria was widely accepted until a 2018 paper from researchers at the Cincinnati Children’s Hospital Medical Center proposed it had found evidence of paternal transmission.

Mitochondria are a type of organelle that are found in the cytoplasm of almost all eukaryotic cells. They convert chemical energy obtained via nutrients to a form of energy that can be used by the cell, via a process known as oxidative phosphorylation. In the mitochondria, a reaction called the Krebs cycle produces the chemical NADH, which is then used by enzymes to create adenosine triphosphate (ATP). Dysfunction of the mitochondria – resulting in their inefficiency – is a hallmark of aging and many chronic diseases. 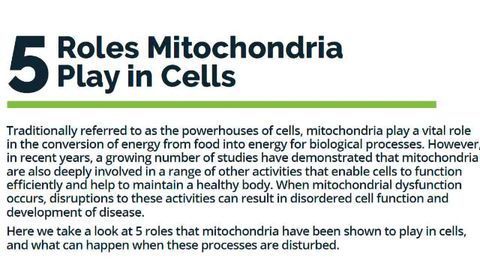 END_OF_DOCUMENT_TOKEN_TO_BE_REPLACED

mtDNA does not appear to be inherited via the paternal line

In 2020, a team led by Professor Patrick Chinnery from the Medical Research Council Mitochondrial Biology Unit utilized data from Genomics England’s 100,000 Genomes Project to study DNA from 11,000 families to explore these claims and hunt for further evidence.

The 100,000 Genomes Project is a British initiative to sequence 100,000 genomes with the aim of understanding the role our genes play in health and disease.

Genome Sequencing in Modern Medicine: An Interview With Genomics England

END_OF_DOCUMENT_TOKEN_TO_BE_REPLACED

Essentially, they did discover mtDNA in the nuclear DNA of some children, which they call nuclear-mitochondrial segments (NUMTs). However, these “inserts” were not present in the parents’ DNA, meaning they could not have been inherited via the paternal line. Chinnery and colleagues proposed that the earlier work in 2018 had likely discovered these inserts but had reached an incorrect conclusion regarding their origin. “We conclude that rare cryptic mega-NUMTs can resemble paternal mtDNA heteroplasmy, but find no evidence of paternal transmission of mtDNA in humans,” they wrote in the publication.

The new study published in Nature is an expansion of the 2020 work, adopting an even larger sample size – 66,083 people, including 12,509 people with cancer – to explore the NUMTs landscape.

They discovered that new inserts of mtDNA into nuclear DNA are happening frequently and offer new insights into the evolution of the human genome. “Billions of years ago, a primitive animal cell took in a bacterium that became what we now call mitochondria. These supply energy to the cell to allow it to function normally, while removing oxygen, which is toxic at high levels. Over time, bits of these primitive mitochondria have passed into the cell nucleus, allowing their genomes to talk to each other,” Chinnery said. “This was all thought to have happened a very long time ago, mostly before we had even formed as a species, but what we've discovered is that that’s not true. We can see this happening right now, with bits of our mitochondrial genetic code transferring into the nuclear genome in a measurable way.”

mtDNA transfer occurs once in 4,000 births

The scientists estimate that this DNA transfer occurs once in every 4,000 births. The molecular mechanisms that enable this transfer are not yet clear, but Chinnery hypothesizes that the process occurs within the egg cells of the mother.

Fifty eight percent of the mtDNA insertions were found to occur in protein-coding genome regions. Thus, the transfer of mtDNA will inevitably increase the size of the genome. However, the team found an inverse correlation between NUMT size and the frequency of its occurrence, which they suggest “points towards a selective process counter-balancing NUMT insertion, maintaining genome size and removing NUMTs that influence gene expression”.

When analyzing the DNA samples from cancer patients, the researchers found a high distribution of NUMTs, arising in around 1 in 1,000 cancers, which they believe reflects genomic instability. In some cases, the insertion of mtDNA contributes to the development of cancer. “Our nuclear genetic code is breaking and being repaired all the time,” said Chinnery. “Mitochondrial DNA appears to act almost like a band-aid, a sticking plaster to help the nuclear genetic code repair itself. And sometimes this works, but on rare occasions if might make things worse or even trigger the development of tumors.”

Chinnery and colleagues also questioned whether mtNDA can absorb elements of nuclear DNA, but there was no evidence that this occurs. They attribute this to the large number of mtDNA copies that exist versus the number of copies of nuclear DNA – there’s a far greater chance that mtDNA will be broken and pass into the nucleus than there is for the reverse to occur. In addition, mtDNA is neatly packaged within two membranes that are not porous, so it would be a challenge for nuclear DNA to work its way in. However, holes in the membrane that protects nuclear DNA can occur, so mtDNA has an easier passageway.