Because not every cell in a cancer tumor is identical genetically, researchers at Rice University and the University of Texas MD Anderson Cancer Center have developed a bioinformatics algorithm that aids their ability to find mutations in single cancer cells.

According to the researchers, the statistical method called Monovar detailed in Nature Methods will help them determine the human genome’s role in how diseases like cancer evolve. They expect it will advance cancer diagnostics and treatment, personalized medicine and prenatal genetic diagnostics. 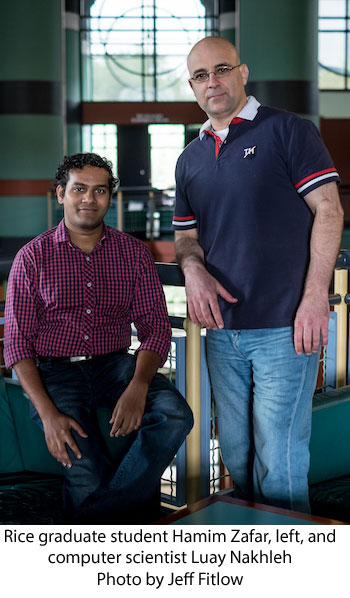 Unlike next-generation sequencing (NGS) techniques that analyze genomes from millions of cells, the open-source Monovar is a novel statistical method that can analyze data obtained from single-cell sequencing that provides genetic data to single-cell resolution.

The project led by Ken Chen, an assistant professor of bioinformatics and computational biology at MD Anderson and an adjunct assistant professor of computer science at Rice, aims to detect slight alterations in DNA known as single nucleotide variants. “Because NGS measures large numbers of cells, genomic variations within tissue samples are often masked,” Chen said.

The subsequent development of single-cell sequencing has had an impact on cancer research, neurobiology, microbiology and immunology and has improved the understanding of tumors, he said.

“If we can resolve genomic data to a single cell, then we can have much more and better data to understand the biology of cancer genomes,” said Hamim Zafar, a graduate student at Rice and co-lead author with Yong Wang, a senior postdoctoral fellow at MD Anderson.

Rice computer scientist Luay Nakhleh, a co-author of the paper, said tumors are known to have a variety of mutations. “This is known as tumor heterogeneity,” he said. “The cells don’t all have the same genome in them, in the sense that they don’t all have the same mutation. Biologists recognize this, but neither data nor the methods have been available to read and analyze it.”

Monovar should fill that gap, he said. “Does heterogeneity play a role in a cancer becoming metastatic or not responding to a drug? This will allow us to ask questions and start looking at heterogeneity from an evolutionary perspective.”

Pinpointing real mutations and eliminating errors will be key to designing custom therapies, Nakhleh said. “These methods are being designed to catalog all the mutations in cells and understand the implications. When people talk about personalized medicine and cancer genomics, this is what they want to know.”

He said it was helpful that Zafar had steady access to people and data at MD Anderson during the two years it took to develop Monovar, which was also the basis for his doctoral thesis.

“This is a great success story about the value of collaboration between Rice and the Texas Medical Center,” Nakhleh said. “Though Hamim is a Rice student, has an office here and an office there, is co-advised by Dr. Chan and works closely with Nicholas Navin, one of the authorities in this field whose lab is developing methods for obtaining single-cell data.”

Navin, an assistant professor of genetics at MD Anderson, is co-author of the paper. Nakhleh is an associate professor of computer science, of ecology and evolutionary biology and of biochemistry and cell biology.