Molly Campbell is a science writer at Technology Networks. She holds a first-class honors degree in neuroscience. In 2021 Molly was shortlisted for the Women in Journalism Georgina Henry Award.
Learn about our editorial policies
The variant in question, D614G, makes a small but effective change in the virus's "Spike" protein, which the virus uses to enter human cells. Credit: LANL.
Read time:

Complete the form below and we will email you a PDF version of "Mutated Form of SARS-CoV-2 Is Dominant, But Doesn't Make Patients Sicker, Study Says"

Viruses, such as SARS-CoV-2, are subject to mutations that can arise through a variety of different mechanisms. Such mutations can have major implications for the development of an effective therapeutic or preventive strategy against a virus, as they can render them ineffective.

It is therefore critical that scientists continuously follow and study viruses to monitor the emergence of genetic variants that may produce changes in the mechanisms by which the virus infects host cells and functions. 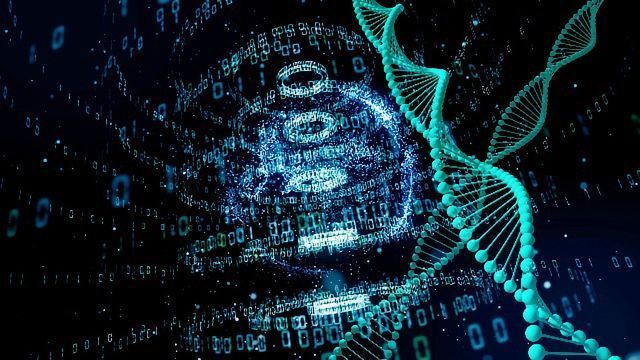 END_OF_DOCUMENT_TOKEN_TO_BE_REPLACED

In the midst of the COVID-19 global pandemic, scientists have been doing exactly that; collecting patient samples and analyzing the genome of the virus which they are infected with. Overall, SARS-CoV-2 has a low mutation rate when compared to other infectious diseases. Back in May, Dr Timothy Triche, co-director of the Center for Personalized Medicine at Children’s Hospital Los Angeles  told Technology Networks: "We, like many, are looking for the emergence of strains that could alter patient immune response or efficacy of a vaccine. To date we have not yet seen such an example after sequencing hundreds of samples."

However, a study published in the journal Cell by Korber and colleagues describes a genetic variant of SARS-CoV-2, known as D614G, as the most prominent form in the global pandemic, and is associated with increased viral transmission and higher infectivity in cell culture. The research is a collaborative effort by scientists at Duke University, Los Alamos National Laboratory (LANL) and the La Jolla Institute (LJI).

The emergence of D614G

“The D614G variant first came to our attention in early April, as we had observed a strikingly repetitive pattern. All over the world, even when local epidemics had many cases of the original form circulating, soon after the D614G variant was introduced into a region it became the prevalent form," said Korber, a theoretical biologist at LANL, in a press release.

The variant is found in the spike, or "S" protein of SARS-CoV-2, a protein that enables the virus' entry into a host cell to cause infection. It's also the target for some of the >140 vaccine candidates currently in development.

D614G is caused by an A-G nucleotide mutation at position 23,403 in the Wuhan reference strain. Virologists at Scripps Research addressed the mutation in May via a preprint study that is now undergoing peer-review, stating that their findings show the mutation results in a "more transmissible SARS-CoV-2" virus.

Korber and colleagues developed a bioinformatics pipeline to track SARS-CoV-2 mutations around the world. They found that this variant was "fixed" as the dominant variation of SARS-CoV-2 by mid-March. In the Cell paper, they write: "Prior to March 1, it [D614G] was found in 10% of 997 global sequences; between March 1-March 31, it represented 67% of 14,951 sequences; and between April 1- May 18 (the last data point available in our May 29th sample) it represented 78% of 12,194 sequences." 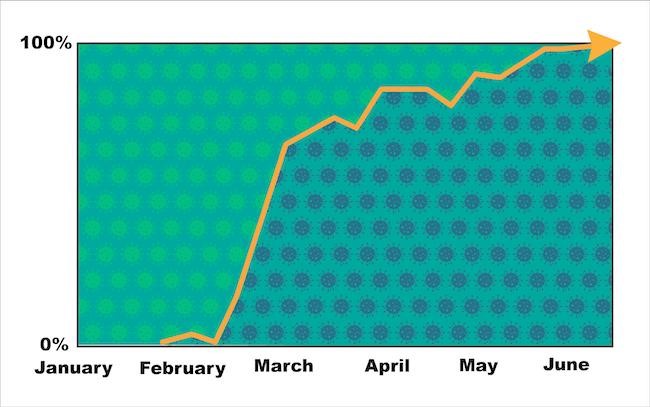 By mid-March, the D614G variant dominated around the world. Credit: La Jolla Institute for Immunology.

In parallel to the bioinformatics analysis taking place at LANL, LJI Professor Erica Ollmann Saphire, who leads the Gates Foundation-supported CoVIC, began investigating the human immune response to different SARS-CoV-2 variants, including D614G. They found that viruses carrying D614G grew two to three times more efficiently; but, when using samples from six San Diego individuals to test how human antibodies neutralize these variants, discovered that the immune system could neutralize the D614G the variant as well or even better than other variants.

The researchers also turned to data provided by the University of Sheffield, including SARS-CoV-2 sequences from 999 individuals presenting with COVID-19 disease at the Sheffield Teaching Hospitals NHS Foundation Trust and the patients' clinical data. Statistical analysis revealed no significant association between D614G status and disease severity, as measured by hospital outcomes.

In a press release, Saphire said: "The clinical data in this paper from the University of Sheffield showed that even though patients with the new G virus carried more copies of the virus than patients infected with D, there wasn't a corresponding increase in the severity of illness."

"The virus doesn't 'want' to be more lethal. It 'wants' to be more transmissible. A virus 'wants' you to help it spread copies of itself. It 'wants' you to go to work and school and social gatherings and transmit it to new hosts. Of course, a virus is inanimate – it doesn't 'want' anything. But a surviving virus is one that disseminates further and more efficiently. A virus that kills its host rapidly doesn't go as far – think of cases of Ebola. A virus that lets its host go about their business will disseminate better – like with the common cold."

In an interview, Dr Anthony Fauci, MD, White House Coronavirus Task Force member and Director of the National Institutes of Allergy and Infectious Diseases, commented on the latest research: “The data is showing there’s a single mutation that makes the virus be able to replicate better and maybe have high viral loads. We don’t have a connection to whether an individual does worse with this or not; it just seems that the virus replicates better and may be more transmissible.”

Whilst the D614G variant doesn't appear to cause a severe infection, it's possible that a different mutation could. "We’ll be keeping an eye on it," said Saphire.