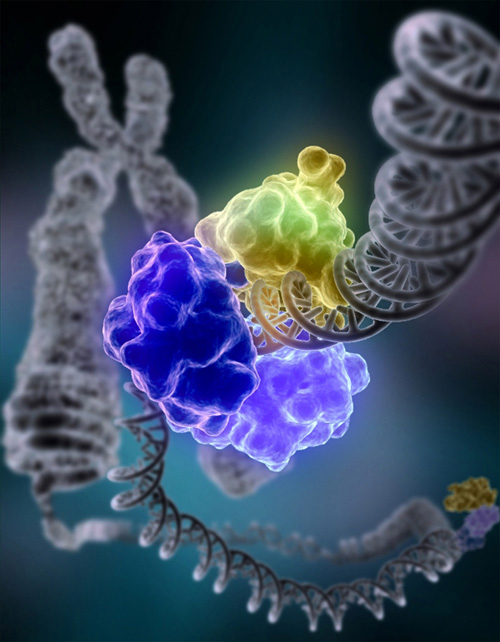 Nearly 12% of men with advanced prostate cancer have inherited mutations in genes that play a role in repairing damaged DNA, according to a new study. Inherited mutations in DNA-repair genes—including BRCA2, ATM, and CHEK2—are associated with an increased risk of several other cancers, including breast, ovarian, and pancreatic cancer.

Reporting their results in the New England Journal of Medicine on July 6, the researchers noted that, in the future, men who have prostate cancer with these inherited mutations may be candidates for particular treatments, such as drugs that target molecular changes associated with defects in DNA repair.

The proportion of inherited, or germline, mutations was so unexpectedly high that the researchers conducted the current study in part to see whether the high frequency of mutations was “reproducible when we were looking at a large population of men,” explained coauthor Colin C. Pritchard, M.D., Ph.D., of the University of Washington.

The answer, he added, “was a resounding yes.”

The frequency of inherited DNA-repair gene mutations in men in the study was higher than the prevalence of 4.6% among 499 men with localized prostate cancer who participated in The Cancer Genome Atlas project, the researchers noted.

“These findings raise the possibility that a high proportion of men with metastatic prostate cancer—1 in 8—may have germline mutations in DNA-repair genes,” said James Gulley, M.D., Ph.D., chief of the Genitourinary Malignancy Branch in NCI’s Center for Cancer Research, who was not involved in the research.

“DNA-repair genes may play a role in the progression to metastatic prostate cancer, and more research should be done to look at mutations in these genes in men with prostate cancer,” Dr. Gulley added.

“The potential for new treatments for these patients is really exciting,” said Dr. Pritchard.

Although PARP inhibitors have not yet been approved for prostate cancer, the Food and Drug Administration in January granted Breakthrough Therapy designation for olaparib for treating certain patients with prostate cancer. The decision was based on results from an early-stage clinical trial that showed a high response rate to olaparib among men with metastatic prostate cancer whose tumors did not respond to standard treatments and had defects in DNA-repair genes.

More research is needed to prospectively evaluate platinum-based chemotherapy in patients with metastatic prostate cancer, noted Dr. Nelson, who presented the study results in June at the annual meeting of the American Society of Clinical Oncology (ASCO). Nonetheless, he added, the findings have pointed “to potential treatments that we would not have thought of otherwise.”

Among all patients in the study (with and without germline DNA-repair gene mutations), 22% had a first-degree relative with prostate cancer. Some relatives had other types of cancer, including breast cancer, ovarian cancer, leukemia, lymphoma, pancreatic cancer, and other gastrointestinal cancers.

For instance, 51 of the 72 patients with an inherited DNA-repair gene mutation (71%) had a first-degree relative with a cancer other than prostate cancer, whereas 270 of the 537 patients without such a mutation (50%) did.

“The types of cancer in some of the family members of men with DNA-repair gene mutations were striking,” said coauthor Michael Walsh, M.D., of Memorial Sloan Kettering Cancer Center. “We don’t typically think of leukemia and lymphoma, for example, as being associated with mutations in DNA-repair genes.”

The researchers have begun to investigate these cases to better understand the association between inherited DNA-repair gene mutations and various types of cancer.

For example, close female relatives of a patient with metastatic prostate cancer who carries an inherited harmful BRCA1 mutation might want to be tested for the presence of the same mutation. If the relatives are found to have the mutation, they could consider taking steps to reduce their risk of developing breast or ovarian cancer.

Dr. Nelson noted that the investigators were conservative in their assessments of potential cancer-related mutations in DNA-repair genes, so the frequency of these mutations could be even higher. The patients in the study were nearly all white, however, and future studies need to include men of different racial and ethnic backgrounds, he added.

Tests for inherited mutations in DNA-repair genes are commercially available. But Dr. Walsh cautioned that, as with any type of genetic testing, “it is important for patients to go to centers that are familiar with the tests and how to interpret the results.”

At the ASCO meeting, Judy Garber, M.D., M.P.H., of the Dana-Farber Cancer Institute discussed Dr. Nelson’s presentation. She supported his recommendation to test all patients with metastatic prostate cancer for inherited mutations in DNA-repair genes.

A frequency of 11.8% is above the criteria for recommending genetic testing in nearly all European countries and “certainly for insurance coverage [of testing] in the United States,” Dr. Garber said. There has been more interest in testing women for mutations in genes such as BRCA2 than men, she continued, adding: “It’s time we brought in the men.”

By her calculation, only 4 of the 190 clinical trials involving PARP inhibitors include men with metastatic prostate cancer. Addressing the audience, she said, “You have a lot of opportunity, and now you have a real clue that you need to move forward.”

Getting a Gene Therapy Product to Market: Pitfalls and How to Prevent Them