Complete the form below and we will email you a PDF version of "My Love is Like A Blue, Blue Rose" 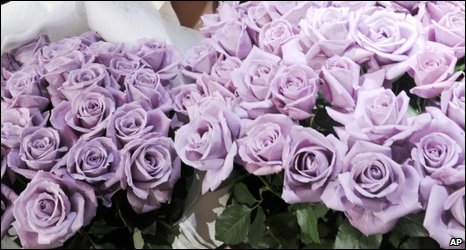 The blue rose has long been referred to by horticulturalists as the "Holy Grail" of the plant breeding world.

Genetically, there is no natural blue pigmentation in the rose to allow a true blue rose to be bred by conventional methods. But in 2004, whisky distiller Suntory said it had succeeded in developing natural blue roses.

With Australian biotech company Florigene, it said it spliced into roses the gene that leads to the synthesis of the blue pigment Delphinidin in petunias. The fruits of that 20-year research project will be delivered to the public next month.

Talk of blue roses is not new. Faux blue roses were traditionally created by dyeing white roses. And nominal "blue roses" have been bred by conventional hybridisation methods. But, according to experts, these are more accurately described as light purple in colour.

In 1847, American nurseryman Samuel Parsons wrote in his book The Rose that progress in science and technology might, indeed, enable gardeners to cultivate blue roses. If so, he said, they would be worth the effort. Rosebreeder Bernard Mehring says that as far back as the 1900s there was a German variety of "blue" rose known as the Veilchenblau. But the petals are, again, more a "mauvey-grey", he says, and it only flowers once.

According to the Victorians, who promoted floriography - the language of flowers - blue roses signified mystery or the attempt to attain the impossible. Since those times the colour of a rose has represented a different sentiment or feeling.

Sarah Holland from the Flowers and Plants Association in the UK says she believes natural blue roses "would be hugely in demand". Dyed-blue roses, which are also a soft purple colour, sell well in the UK, she says. "They don't appeal to everyone because they are unnatural, but there is definitely a place for them. They are, for example, popular for weddings." Her association receives lots of inquiries about black or blue roses every year ahead of Valentines Day, she adds. "Roses may be ubiquitous nowadays, but they haven't lost their meaning and people are always looking for something that is unique."

Standing out
Helen Bostock, a horticulture advisor at the UK's Royal Horticultural Society, says that while a true-blue rose sounds fabulous, it could stand out like a "sore thumb". "A natural blue rose would signify something that is expensive and rare. It would signify exclusivity. "It has been the Holy Grail to rose breeders, but, personally, I think it would look odd - a bit like a plate of blue chips."

She is doubtful that a blue rose would be anything other than a novelty. "A red rose signifies passion, but blue is a bit cold in my book." Breeder Bernard Mehring is also unimpressed by the news of the blue rose. He has managed to breed a black rose, but says that if you tried to grow it in the garden the sunlight would cause the petals to shrivel up.

He thinks the blue rose, for different reasons, would be no good in the garden. "I can't see that a natural blue rose would be easy to grow." Its cultivation would not be allowed in some countries, such as the UK, because of the controls imposed on genetically-modified plants.

Feeling blue
Roses have been the subject of many myths, legends, poems and paintings. Our fascination with them stretches back centuries. The Romans loved roses. The Emperor Nero was believed to have had an extravagant rotating banquet hall in which rose petals cascaded from the ceiling. And Napoleon Bonaparte's Empress Josephine instructed collectors to send her roses from around the known world, even during the Napoleonic Wars.

In Japan, where the act of present-giving is highly ritualistic, the new blue variety, Applause, will be marketed as a "luxurious gift for special occasions such as wedding anniversaries". There are no current plans to sell the new variety overseas, which might not be a bad thing, according to Mr Mehring. He warns that in some countries blue is not a popular colour for flowers. "In Italy, the blue is associated with mistrust or bereavement," he says. In China, however, according to one Chinese folk tale, the blue rose signifies hope against unattainable love.
---
Blue Roses, Rudyard Kipling

Roses red and roses white
Plucked I for my love's delight.
She would none of all my posies -
Bade me gather her blue roses.

Half the world I wandered through,
Seeking where such flowers grew;
Half the world unto my quest
Answered me with laugh and jest.

Home I came at wintertide,
But my silly love had died,
Seeking with her latest breath
Roses from the arms of Death.

It may be beyond the grave
She shall find what she would have.
Mine was but an idle quest -
Roses white and red are best.