Myc is a cancer-causing gene responsible for disrupting the normal 24-hour internal rhythm and metabolic pathways in cancer cells, found a team led by researchers from the Perelman School of Medicine at the University of Pennsylvania. Postdoctoral fellow Brian Altman, PhD, and doctoral student Annie Hsieh, MD, both from the lab of senior author Chi Van Dang, MD, PhD, director of the Abramson Cancer Center, study body clock proteins associated with cancer cells.

The researchers found that MYC may affect circadian rhythm and metabolism by promiscuously binding to promoter regions in key genes for maintaining these daily cycles. Co-first authors Altman and Hsieh, Dang and colleagues report their results online.

“Our data suggest that MYC-driven cancers have altered circadian oscillation due to upregulation in another clock protein called REV-ERBα, and that these Myc cancers may be good candidates for chronotherapy,” Altman said. “This work ties together the study of cell metabolism and cancer chronotherapy – If cells don’t have to ‘rest,’ they may replicate all the time, with no breaks at all.” Cancer chronotherapy is based on the concept that the right time of treatment during the day could decrease side effects to normal cells while killing cancer cells. 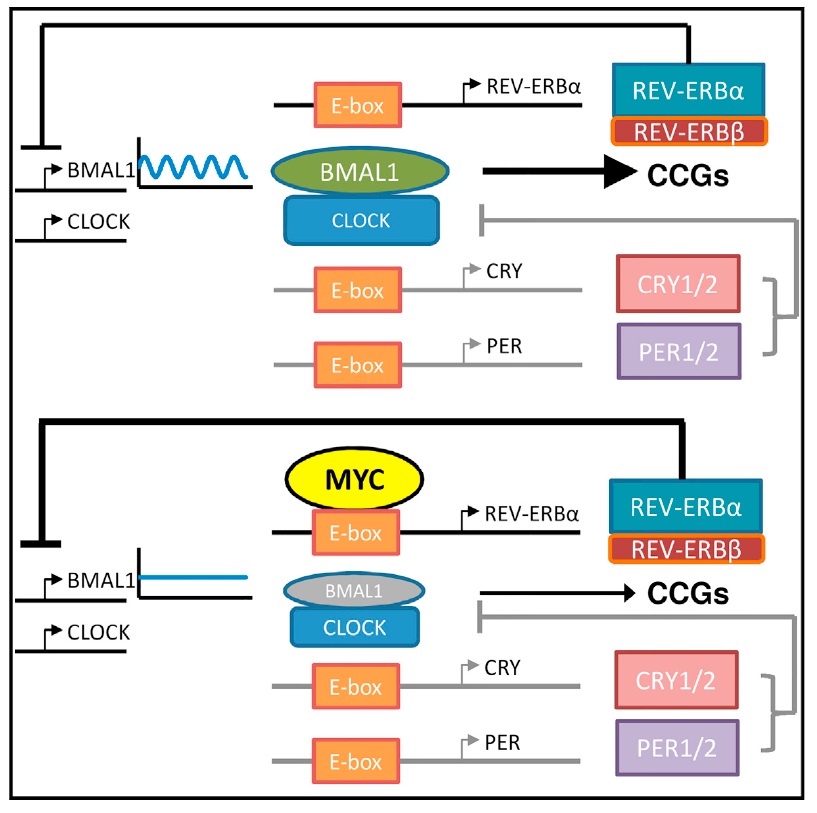 Understanding these basic mechanisms should lead to better cancer treatment strategies that reduce side effects and increase effectiveness” Hsieh said.

The team found that MYC is a double-duty protein. In addition to its role in metabolic pathways, MYC also works directly on damping BMAL1 in its tumor-suppressor role via spurring increased REV-ERBα activity. Essentially MYC suppresses a suppressor -- BMAL1.

In the current paper, knowing that MYC, a transcription factor that binds the genome through sites that are identical to the binding sites of BMAL1, the team hypothesized that aberrant MYC expression perturbs the clock by deregulating components of the circadian network in cancer cells.

They found that deregulated expression of MYC disrupts the molecular clock in cell lines by directly inducing REV-ERBα to dampen expression and oscillation of BMAL1. What’s more, the disrupted circadian oscillations in the MYC-expressing cancer cells could be partially rescued by inhibiting expression of REV-ERBα.

“We thought that some cancer cells’ metabolites oscillate and some don’t, but we had not tested it,” Altman recalled. To address these questions, Dang, Altman, and Hsieh collaborated with Penn colleague, Aalim Weljie, PhD, research assistant professor of Pharmacology, using an osteosarcoma cancer cell line to study the interaction of MYC and metabolism in cancer cells. The glucose pathway in this cell line oscillates normally. However, when they increased MYC, the oscillations vanished and glucose was taken up at a much great rate.

“This led us to better understand how and why cancer cells efficiently hijack the cell’s energetics machinery to be able to keep up rapid replication,” Hsieh said. Knowing that cancer cells have a different metabolic profile, the team surmises that this can inform when to treat cancer -- when normal cells are quiet -- to decrease toxicity, while increasing efficacy against the always-awake cancer cell.

“Our results demonstrate an unsuspected link between the cancer-causing abilities of some cells and abnormal circadian and metabolic rhythms, which we surmise to be advantageous for cancer,” Dang said.