Complete the form below and we will email you a PDF version of "'Natural Cocktail' Prevents, Treats Wine Grape Disease"

The study describes the use of four bacteriophages that were identified for their ability to attack the bacteria that causes the devastating disease in grapes and several other plants.

A bacteriophage, or phage, is a virus that attacks bacteria. Because they are abundant in the environment, scientists are trying to learn more about the different types and what specific bacteria each can attack. Scientists at AgriLife Research were able to isolate four phages that specifically target Xylella fastidiosa, the culprit in Pierce’s disease.

“The bacteria Xylella fastidiosa is native to the U.S. and causes disease in many plants including grapevines, oaks, peaches, almonds, coffee and citrus,” said Carlos Gonzalez, an AgriLife Research plant pathologist in College Station. “We have imported most of our grapevines from Europe, and so therefore the pathogen and the host – in this case the grapevine – did not co-evolve. That made the grapevines susceptible.” 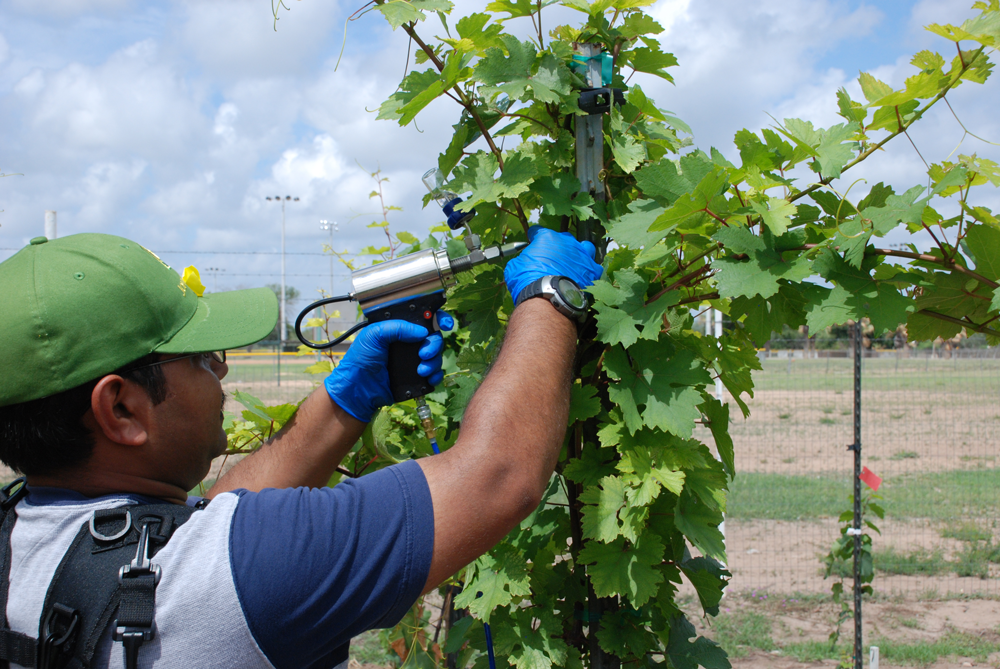 The offending bacteria makes its way to plants via insects. In wine grapes, it’s the glassy-winged sharpshooter. When the insect feeds on a plant, the bacteria is transmitted inside the plant where it travels throughout the xylem vessels, infecting as it goes. The resulting condition, called Pierce’s disease, can cause a vineyard to die in anywhere from a few months to a few years after infection, according to Jim Kamas of Fredericksburg, Texas A&M AgriLife Extension Service horticulturist and outreach coordinator for the Texas Pierce’s Disease Research and Education Program.

“Instead of feeding on the leaves of a plant, the glassy-winged sharpshooter feeds on the cane of a grapevine and therefore spreads the bacterium much more efficiently,” Gonzalez explained.

The insect, about the size of a grain of rice, could feed its way into an estimated $24.6 billion of California wine sales in the U.S., according to the Wine Institute, and the Texas Wine and Grape Growers Association’ estimated $1.88 billion of economic value to the state.

Stopping the rampage with potential to make such an enormous dent in food and beverage supply heretofore relied on insecticides aimed at the carrier bugs.

However, the group of insecticides used have been shown to have adverse effects on beneficial insects such as honeybees and have already been banned in Europe, the scientists said. These concerns lead them to seek a biocontrol, or more natural way of preventing and treating diseases caused by Xylella fastidiosa, said Gonzalez, who also is part of the Center for Phage Technology in College Station where the research was done.

“Our approach basically was to directly address the bacterium that causes the disease rather than focus on the insect,” Gonzalez said of his colleagues at the center, Ry Young, Mayukh Das and Tushar Suvra Bhowmick. “The phage treatment offers an alternative to pesticides for the treatment of diseases caused by Xylella fastidiosa.”

Young said the idea of a phage cocktail is to include several different phages so that if a bacterial strain becomes resistant to one of the phages, then it will be killed by the others.

“Like the famous boxer Jack Dempsey said, ‘if my right hand don’t get ya, my left hand will.’ That’s pretty much how the cocktails work,” said Young, the center’s director.

“We have a phage bank with more than 100 phages,” Bhowmick said. “We picked the four candidates – known as Sano, Salvo, Prado and Paz – because of their physical and genetic characteristics. And they are very different from each other.”

Grapevines grown in a greenhouse were inoculated with the bacteria and with the cocktail consisting of the four phages. The team experimented both with applying the phage cocktail after the plants had been infected with Xylella fastidiosa and to plants before infection by the bacteria.

They found that the cocktail worked both to prevent infection of the grapevines and to stop the disease when infection had begun.

“We got very promising results so we are pretty sure that this is an alternative therapy for Xylella fastidiosa,” Bhowmick said.

“Phages have really great potential,” Das added. “There are a lot of diseases all over the world in terms of humans, animals and plants diseases in which a phage can be a ‘green’ solution. This technology – phage therapy technology – could be transferred to other economically important crops like coffee, bananas and olives.”

Bhowmick, who’d never seen a grapevine in her native India before accepting her post-doctoral position with AgriLife Research, said the phage technology is also promising for treating pathogens such as cholera that plague people in developing countries where there are no other solutions.

“Phage research is not new, but until now no other laboratory had been able to isolate and propagate phage for Xylella. Our lab is the first to do it and show that phages can control Pierce’s disease,” she said.

Gonzalez said the phage cocktail is currently being field tested in Texas. The research was supported by Otsuka Pharmaceutical Co. Ltd. and Ridge Vineyards.