The FOXC1 gene is normally switched on during embryonic development and is needed to turn cells into specialised tissues, like the eyes, kidney, brain and bone.

But this new research found that in certain patients with AML – a type of blood cancer that affects white blood cells and the bone marrow – this gene was wrongly switched on inside the patient’s cancer cells.

When it is switched on in blood cell tissue, FOXC1 stunts the development of blood cells and stops them maturing into normal specialised blood cells. 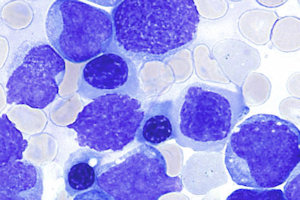 This triggers the cancer to be more aggressive, as young cells are able to replicate more than mature cells – causing cancer cells to grow faster and become more difficult to treat.

Around 2,900 people were diagnosed with AML in the UK in 2011. Of these, around 20 per cent would have had the FOXC1 gene wrongly switched on in their cancer.

Dr Tim Somervaille, lead author from the Cancer Research UK Manchester Institute at The University of Manchester, said: “This is an important finding which helps us understand how acute myeloid leukaemia develops and why some cases of AML are more aggressive than others. Here, instead of being faulty or mutated, this normal gene is turned on in the wrong place at the wrong time which makes the cancer grow more rapidly.

“There are certain situations where this gene is necessary, as in the development of the eye and skeleton before birth. But when it’s switched on in the wrong tissue, it causes more aggressive forms of leukaemia.”

Nell Barrie, senior science communication manager at Cancer Research UK, said: “It’s essential that we continue to research basic biology to further understand how cells become cancerous. In this study, identifying a specific gene behind more aggressive forms of acute myeloid leukaemia could give clues for new ways to personalise treatments for select patients. The better we understand the nuts and bolts of each cancer, the sooner we can find new ways to stop it.”