Complete the form below and we will email you a PDF version of "New Method Detects Telomere Length for Research into Cancer, Aging" 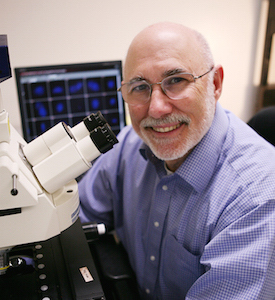 In broad terms, telomeres help determine whether a cell reproduces accurately. As the cell divides, these endcaps degrade, causing the cell to age – and it is believed this degradation may lead to some aspects of aging in humans. UT Southwestern scientists hope to use knowledge of telomeres to slow or stop cells from aging, or to potentially help stop the uncontrolled growth of cancer cells that maintain their telomeres.

Finding the best and most sensitive methods for measuring telomeres is an important initial step that could eventually enable scientists to encourage healthy cell growth or, in the case of cancer, limit or halt the cell growth.

Telomeres are the ends of chromosomes, which package genetic information to pass from parents to children. As the cell divides, these endcaps help keep the genetic information stable and prevent the chromosomes from fusing together. But as cells divide, the telomeres shorten and, eventually, trigger DNA damage that in conjunction with other factors can lead to progression of aging and an increased chance of cancer emerging.

Scientists are interested in understanding this cellular aging process to create an “immortal cell,” which could continue to create new cells without degrading and that could have important implications for diseases related to aging. In reverse, controlling the cellular aging process could accelerate the mortality of cancer cells. If telomeres in cancer cells shorten, this action could prevent the cancer cells from dividing uncontrollably in their early stages of development, slowing or halting cancer progression. In the event that a tumor has already developed, anti-telomerase therapy might be administered to prevent relapse.