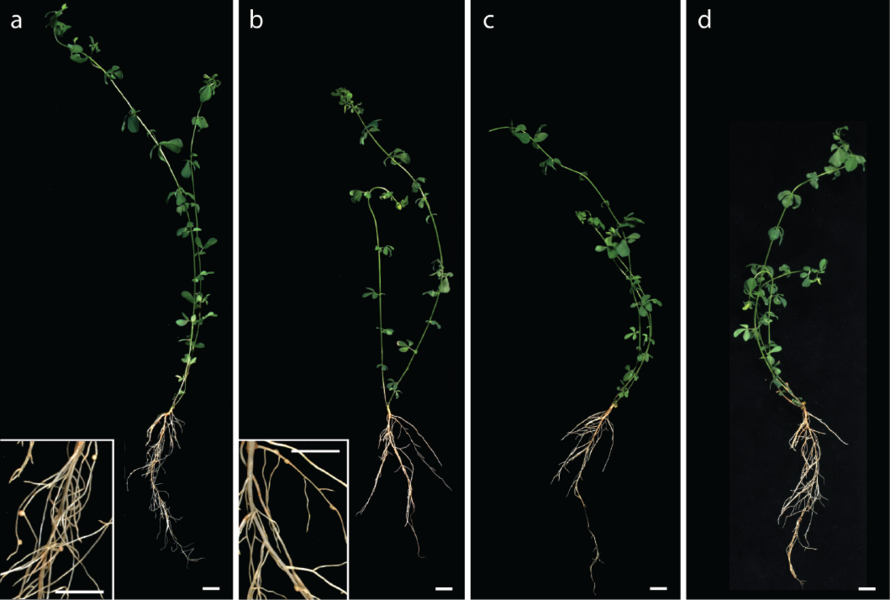 Legumes form a unique symbiotic relationship with bacteria known as rhizobia, which they allow to infect their roots. This leads to root nodule formation where bacteria are accommodated to convert nitrogen from the air into ammonia that the plant can use for growth. This symbiotic nitrogen fixation allows legumes to thrive in habitats with limited nitrogen availability.

Researchers from Denmark and Germany have now found that an intact nitrogen-fixing symbiosis in Lotus japonicus is needed for the establishment of taxonomically diverse and distinctive bacterial communities. Integrating these highly specific binary interactions into an ecological community context is critical for understanding the evolution of symbiosis and efficient use of rhizobia inoculum in agricultural systems.

Legumes are known as pioneer plants colonising marginal soils, and as enhancers of the nutritional status in cultivated soils. This beneficial activity has been explained by their capacity to engage in symbiotic relationship with nitrogen-fixing rhizobia. The beneficial effect of this symbiosis is not limited to legume hosts, but extends to subsequent or concurrent plantings with non-legumes as exemplified by ancient agricultural practices with legume cropping sequences or intercropping systems. This symbiosis likely involves a beneficial activity of legumes on the nutritional status of the soil as well as the soil biome. However, the mechanisms underpinning these symbiotic interactions in a community context and their impact on the complex microbial assemblages associated with roots remain largely unknown.

The research team performed a bacterial community profiling analysis of Lotus japonicus wild-type plants, grown in natural soil, and symbiotic mutants impaired at different stages of the symbiotic process. They found that the loss of nitrogen-fixing symbiosis impacts plant growth, and dramatically alters Lotus-associated community structures, affecting at least 14 bacterial orders. This growth phenotype and the altered community structure were retained under nitrogen-supplemented conditions that blocked the formation of functional nodules in wild-type.

This finding extends the role of key symbiotic genes beyond perception and selection of nitrogen-fixing rhizobia for intracellular accommodation in nodules, and reveals a major role in the establishment of bacterial communities in the root and rhizosphere of L. japonicus.

Their study raises the possibility that the influence of legumes on soil performance in agricultural and ecological contexts is mediated by the enrichment of a symbiosis-linked bacterial community rather than dinitrogen-fixing rhizobia alone. In the longer term, these bacteria alone or with rhizobia could be used as inoculum for other plants to increase their growth with minimal nutrient consumption.

Story from Aarhus University. Original piece written by Lisbeth Heilesen. Please note: The content above may have been edited to ensure it is in keeping with Technology Networks’ style and length guidelines.