﻿March of the penguins

Penguins are an iconic and diverse bird group, arguably most famous for their attractive looks and the irony of being "birds that can't fly". The aquatic birds inhabit the Southern hemisphere of the globe, bar one species – the Galápagos penguin – and spend half of their lives on land, and half in water.

Penguins have long captured the interest of scientists. A plethora of studies have explored their evolution from flying birds to deep sea divers, and how their enhanced thermoregulation systems enable their survival, in extreme cold locations such as the Antarctic sea, to the tropical Galápagos Islands.

Now, scientists want to understand penguins at the genomic level. The Penguin Genome Consortium is a research effort involving scientists from China, Denmark, New Zealand, Australia, Argentina, South Africa, the UK, the US, France and Germany. 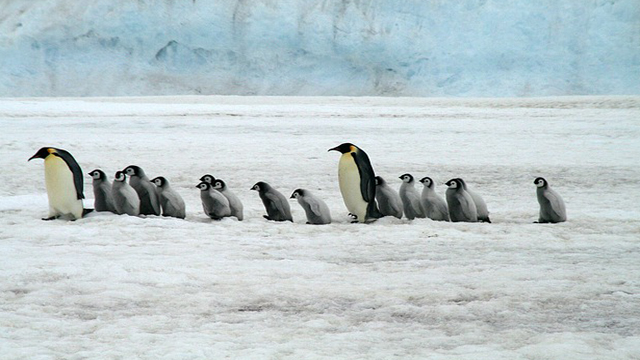 This study provides great insights into the biological order of penguins, which encourages further research into a large variety of areas – including the impact of climate change. Several penguin populations have witnessed rapid decline over the last few years, and this is predicted to continue. The King penguin population, for example, has declined by a staggering 88% in just 30 years. This decline has been attributed to global warming, pollution, environmental degradation, exploitation of the marine environment, fisheries bycatch, and the introduction of exotic predators.

Therefore, many ecosystem monitoring studies focus on penguins. The addition of high-quality genomic data for all the extant penguin species will no doubt complement studies exploring population loss.

Author Theresa Cole from the University of Otago in New Zealand says of this work: "The population history of different penguin species can be seen in their genome. We will provide new insights into the population history of all penguins over dramatic climate events, to predict population trends under future climate change scenarios. This research will help us understand how future climate change may affect other species, to help us develop conservation strategies."

A logistic and cultural challenge

As some species of penguins inhabit remote and discrete corners of the globe, it was a logistical challenge for the scientists to obtain specimens of sufficient quality for genomic analysis. Cultural considerations were a factor too, as many cultures have important links to the penguins. The researchers suggest that their sensitive handling of these manners could be adopted as a model for future studies in which trust must be built with cultures that have important links to other native species.

Co-author Bruce McKinlay from the New Zealand Department of Conservation highlights this, saying: "Genome research in New Zealand is currently moving into novel cultural contexts, especially for penguins, which are Taonga or treasured possessions in Māori culture. As such, our consortium have undertaken rigorous indigenous consultation to sequence the genomes from six New Zealand Taonga species. We believe these genomes will be important for a cultural context."

The goal of this first step of the Penguin Genome Consortium project was to simply sequence high-quality genomes. It is encouraging therefore that initial validation studies are already making great use of the data, providing critical insight into the evolutionary history of the penguin tree. An initial phylogenetic tree that is presented in this study illustrates that penguins have adapted to Antarctica on several occasions.

Senior author Guojie Zhang from the University of Copenhagen, BGI, and Kunming Institute of Zoology says of this: "The penguin ancestor experienced rapid radiation leading to the current approximate 20 extant species, accompanied by many ancient lineages that are now extinct. The radiation of penguin thus provides an excellent example for the study of speciation."

The consortium is also in the process of sequencing the genomes of penguins that have become extinct more recently, in addition to conducting population genomic studies using multiple genomes per species.

The Penguin Genome Consortium announce that they welcome new members wishing to join the open consortium and contribute to the research being undertaken. While this sequencing work is still in process, early access to the 19 penguin genomes data has been provided. The members of the Consortium have asked research groups utilizing this data for similar cross-species comparisons to follow the Fort Lauderdale and Toronto agreements.