New research from UC Riverside identifies a protein that controls plant growth -- good news for an era in which crops can get crushed by climate change.

Researchers found the protein, IRK, while looking for clues to the ways plant cells divide or expand. They discovered IRK in the roots cells of a plant related to mustard.

"When this protein is present, the root perceives a signal that tells cells not to divide," said Jaimie Van Norman, who led the study and is an assistant professor of plant sciences at UCR. "If we can get the plant to ignore those signals, we may be able to get it to grow in conditions where it might not otherwise."

The team's work on IRK was recently published in Developmental Cell. The research demonstrates that turning off the gene producing IRK causes an increase in the number of times the plant's root cells divide. Additional cells can lead to bigger roots, and perhaps to plants that are better at taking up nutrients from the soil and grow larger.

There may be some instances in which farmers also want to limit plant growth. For example, keeping weeds small, or trying to pause crop growth until a severe storm passes. IRK can be instrumental for both goals.

"This discovery gives us another way to control growth," Van Norman said. "Understanding how the plant itself stops growth can also allow us to accelerate growth."

So far, Van Norman's team has only tested the effects of turning off the IRK gene in Arabidopsis, the mustard relative. However, Van Norman said the IRK protein is also found in other crop plants.

This research is notable not only for its potential impact on crop and food security, but also because roots have historically been less well studied than the above-ground parts of plants. This is likely due to the relatively inaccessible nature of roots, Van Norman said.

However, the roots are critical for plant survival and for the production of above-ground plant organs such as leaves flowers and fruits. Therefore, understanding their function and development is critical in efforts to improve crop productivity.

Previous research has examined the role of signals sent between cells up and down the plant from the roots up toward the shoots and vice versa. This study shows communication between cells across the root is important as well.

"There was a longstanding hypothesis that this type of horizontal communication between cells was important, and this work provides new evidence that it is," Van Norman said. 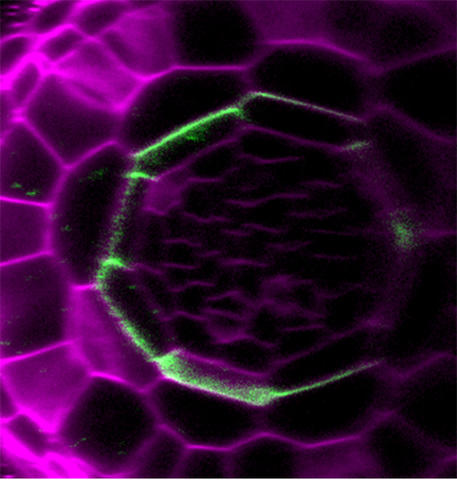 ​IRK protein, pictured in green, is located on one side of the plant root cell. Credit: Jaimie Van Norman/UCR).

Next, Van Norman is hoping to understand whether bigger roots survive stress better. Some of the biggest challenges to crops include drought and high levels of salinity in soils.

Salts accumulate in soil both from natural and manmade sources, such as fertilizers and salts in irrigation waters. If there is too much salt built up near the soil surface, it can prevent vital processes in plant growth and even cause crops to fail entirely.

Out of an abundance of caution and without accurate salinity measurements, farmers have traditionally over-irrigated their fields to send salts into lower soil depths where they are less harmful to crops. However, this practice is being scrutinized as both the quantity and quality of water becomes scarcer.

"It may be the case that by understanding what happens when the IRK-producing gene is turned off, we can make root growth less sensitive to soil conditions that pose a threat to food security," Van Norman said.

Mathematicians, physicists and materials experts might not spring to mind as the first people to consult about whether you are brewing your coffee right. But a team of such researchers are challenging common espresso wisdom.

END_OF_DOCUMENT_TOKEN_TO_BE_REPLACED

Researchers led by a team at Massachusetts Eye and Ear have identified a novel cellular entry factor for adeno-associated virus vector (AAV) types--the most commonly used viral vectors for in vivo gene therapy. AAVs are vectors-or vehicles--that are created from a virus that is made harmless by molecular engineering, and have shown promise transporting genetic therapy treatments to affected tissues.

END_OF_DOCUMENT_TOKEN_TO_BE_REPLACED

A New Component of Blood Is Revealed

Scientists have revolutionized knowledge of the mitochondria organelle by revealing that whole functioning extracellular mitochondria are in fact found in the bloodstream.

END_OF_DOCUMENT_TOKEN_TO_BE_REPLACED

The Key to the Plasma Proteome

END_OF_DOCUMENT_TOKEN_TO_BE_REPLACED

Preventing Cancer Cells From Producing Fat To Stop Their Spread