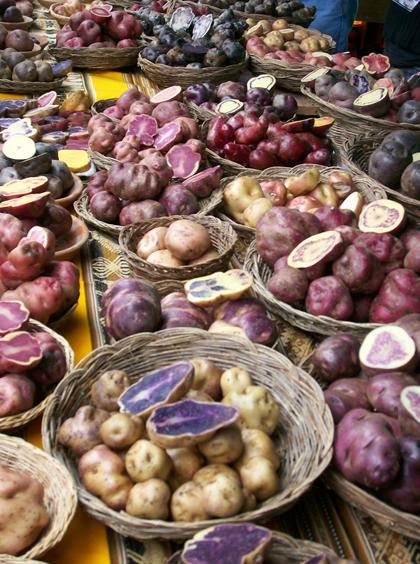 CAPTION
By C. Robin Buell
After five years of work, the genome of the potato, the world's third most important food crop, has been sequenced. Researchers hope will shorten the time it takes to breed new potato, disease-resistant and better-producing varieties.

Potatoes, they found, have about 39,000 genes -- "not large and not small," in the scheme of things, says Robin Buell, a plant geneticist at Michigan State University in East Lansing, Mich. who was one of the leads on the Potato Genome Sequencing Consortium, which took place in over 20 labs around the world.

Their work is published in this week's edition of the journalNature.

While spuds may seem simple on the plate, genetically they're quite complex. Cultivated potatoes have four sets of chromosomes, compared to the two that humans carry. That makes doing the kind of simple crosses that plant breeders are used to difficult. Today creating new potato varieties by conventional breeding can take between ten and 12 years. With the genome sequenced, researchers will now be able to identify genes of interest in potato varieties and then look for them and only grow out those plants. "Now we can make very educated guesses that we can breed for," says Buell.

One example is the Purple Heart potato bred by researchers at Plant & Food Research in New Zealand, using knowledge of the genome to increase anti-oxidant levels in the skin and flesh. They show up as an intense purple coloration in the hear of the potato. 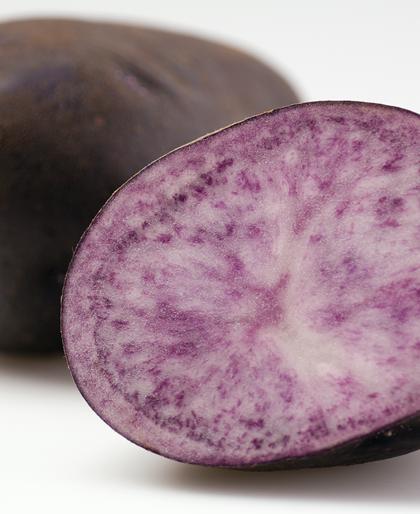 Potatoes are a food crop that is growing in importance, especially in the developing world. In 2009 the UN Food and Agriculture Organization put production at 330 million tons. The tubers are members of the Solanaceae family, related to tomatoes, peppers, petunia, tobacco and eggplant. The genome is the first from the group of flowering plants known as asterids, which make up about 25% of plant species worldwide.

The potato originates in the highlands of Peru, Bolivia and northern Chile. When it was brought into the rest of the world as part of the Columbian Exchange, only a few varieties of the thousands that occur in its home range were widely planted elsewhere. Because of this commonly planted varieties tend to suffer from "acute inbreeding depression, and are susceptible to many devastating pests and pathogens, as exemplified by the Irish potato famine in the mid-nineteenth century," the researchers say in their paper.