Complete the form below and we will email you a PDF version of "Rapid Rise in Seed Prices Draws U.S. Scrutiny" 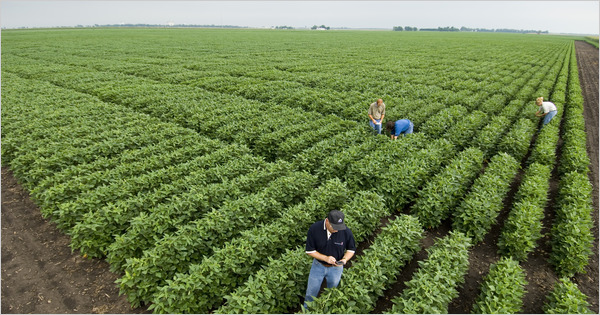 Monsanto researchers in Stonington, Ill., are
working to develop new soybean varieties that will be tolerant to
agricultural herbicide and have greater yields.

During the depths of the economic crisis last year, the prices for many
goods held steady or even dropped. But on American farms, the picture
was far different, as farmers watched the price they paid for seeds
skyrocket. Corn seed prices rose 32 percent; soybean seeds were up 24
percent. 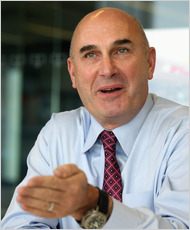 Such price increases for seeds — the most important purchase a farmer
makes each year — are part of an unprecedented climb that began more
than a decade ago, stemming from the advent of genetically engineered
crops and the rapid concentration in the seed industry that accompanied
it.

The price increases have not only irritated many farmers, they have
caught the attention of the Obama administration. The Justice
Department began an antitrust investigation of the seed industry last
year, with an apparent focus on Monsanto,
which controls much of the market for the expensive bioengineered
traits that make crops resistant to insect pests and herbicides.

The investigation is just one facet of a push by the Obama
administration to take a closer look at competition — or the lack
thereof — in agriculture, from the dairy industry to livestock to
commodity crops, like corn and soybeans.

On Friday, as the spring planting season approaches, Eric H. Holder Jr., the attorney general, and Tom Vilsack,
the agriculture secretary, will speak at the first of a series of
public meetings aimed at letting farmers and industry executives voice
their ideas. The meeting, in Ankeny, Iowa, will include a session on
the seed industry.

“I think most farmers would look to have more competition in the
industry,” said Laura L. Foell, who raises corn and soybeans on 900
acres in Schaller, Iowa.

The Iowa attorney general, Tom Miller, has also been scrutinizing
Monsanto’s market dominance. The company’s genetically engineered
traits are in the vast majority of corn and soybeans grown in the
United States, Mr. Miller said. “That gives them considerable power,
and questions arise about how that power is used,” he said.

Critics charge that Monsanto has used license agreements with smaller
seed companies to gain an unfair advantage over competitors and to
block cheaper generic versions of its seeds from eventually entering
the market. DuPont,
a rival company, also claims Monsanto has unfairly barred it from
combining biotech traits in a way that would benefit farmers.

In a recent interview at Monsanto’s headquarters in St. Louis, its
chief executive, Hugh Grant, said that while his company might be the
market leader, competition was increasing as the era of biotech crops
matured.

“We were the first out of the blocks, and I think what you see now is a
bunch of people catching up and aggressively competing, and I’m
fighting with them,” Mr. Grant said. He said farmers chose the
company’s products because they liked the results in the field, not
because of any untoward conduct on Monsanto’s part.

Yet in a seed market that Monsanto dominates, the jump in prices has been nothing short of stunning.

Including the sharp increases last year, Agriculture Department figures
show that corn seed prices have risen 135 percent since 2001. Soybean
prices went up 108 percent over that period. By contrast, the Consumer Price Index rose only 20 percent in that period.

Many farmers have been willing to pay a premium price because the
genetically engineered seeds that make up most of the market come with
advantages. Genetic modifications for both corn and soybeans make the
crops resistant to herbicides, simplifying weed control and saving
labor, fuel and machinery costs. Many genetically engineered corn and
cotton seeds also resist insect pests, which cuts down on chemical
spraying.

Lee Quarles, a Monsanto spokesman, said the price increases were
justified because the quality of the seeds had been going up, and new
biotech traits kept being added. For example, he said, many corn
varieties now include multiple genes to battle insect pests, raising
their value.

Mr. Quarles said higher prices were justified because the traits saved farmers money and made their operations more efficient.

Monsanto began investing heavily in biotechnology in the 1980s — ahead
of most other agricultural companies. In the mid-1990s, it became the
first to widely market genetically engineered seeds for row crops,
introducing soybeans containing the so-called Roundup Ready gene, which
allowed plants to tolerate spraying of its popular Roundup weed killer.
Soon after, it began selling corn seed engineered with a gene to resist
insect pests.

The number of biotech plant traits has grown since then, and other large companies — including DuPont, Dow Chemical, Syngenta, BASF
and Bayer CropScience — have gotten into the business. But Monsanto has
taken advantage of its head start. Today more than 90 percent of
soybeans and more than 80 percent of the corn grown in this country are
genetically engineered. A majority of those crops contain one or more
Monsanto genes.

As biotechnology has spread, Monsanto and its competitors have bought
dozens of smaller seed companies, increasing the concentration of
market power in the industry.

Monsanto sells its own branded seed varieties, like Dekalb in corn and
Asgrow in soybeans, to farmers. But it has expanded its influence and
profits by licensing those traits to hundreds of small seed companies,
allowing them to incorporate the traits in the seeds they sell. It has
also granted licenses to the other large trait developers, allowing
them to create combinations of engineered traits in a process known as
stacking.

Monsanto says that its licensing shows it is the opposite of a monopolist, encouraging rather than hampering competition.

But critics say the licenses give Monsanto excessive control. Seed
company executives said the licenses were sometimes worded in a way
that compelled them to sell Monsanto traits over those of its
competitors. Mr. Quarles denied that, saying the contracts contain
sales incentives typical of the industry.

Some of the most pointed accusations have come in a court battle
between Monsanto and DuPont. Last year Monsanto sued its rival, saying
DuPont had used a Monsanto trait to create a gene combination that was
not permitted in its licensing agreement.

DuPont countered by charging that Monsanto was using its market power
to strong-arm competitors and quash innovation that would benefit
farmers and consumers.

In January, Monsanto won a partial victory. A federal judge ruled that
the license barred DuPont from creating the gene stack. But the judge
said that DuPont could move ahead with its antitrust claims, which, if
successful, could potentially nullify the stacking ban.

DuPont made another accusation that caught the attention of farmers and
regulators, saying that Monsanto was trying to head off the eventual
entry into the marketplace of generic Roundup Ready seeds.

The company’s patent on the Roundup Ready trait in soybeans expires
before the 2014 planting season, meaning that, just as in the
pharmaceutical business, rivals would be free to sell a cheaper
version. Farmers would also be free to save seed from one year to the
next, a money-saving step they are now barred from taking.

But DuPont charged that Monsanto was trying to force seed companies to
switch prematurely to its second-generation Roundup Ready soybeans and
taking other steps to make the entry of generics more difficult.

Monsanto responded by announcing that it would not block companies from
selling a generic version of Roundup Ready seeds. But farmers have
continued to fret that cheaper generic seeds may be at risk.