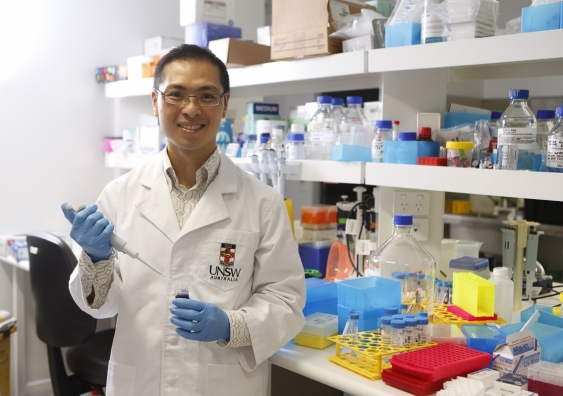 UNSW medical scientists have discovered that DNA repair is compromised at important regions of our genome, shedding new light on how cancers develop in the human body.

Repairing damage in DNA from anything that causes a mutation, such as UV radiation and tobacco smoke, is a fundamental process that protects our cells from becoming cancerous.

In the study published today in the journal Nature, the scientists analysed more than 20 million DNA mutations from 1,161 tumours across 14 cancer types. They found that in many cancer types, especially skin cancers, the number of mutations was particular high in regions of the genome known as ‘gene promoters’. Significantly, these DNA sequences control how genes are expressed which in turn determine cell type and function.

The researchers showed that the numbers of DNA mutations are increased in gene promoters because the proteins that bind DNA to control gene expression block one of our cell repair systems responsible for fixing damaged DNA. This system is known as nucleotide excision repair (NER) and is one of a number of DNA repair mechanisms that occurs in human cells and the only one capable of repairing damage from UV light.

“What this research also tells us is that while the human body is pretty good at repairing itself, there are certain parts of our genome that are poorly repaired when we sustain damage from mutagens such as UV light and cigarette smoke,” said Dr Wong, who is an Australian Research Council Future Fellow.

“By actively avoiding these harmful environmental factors, we can minimise the number of mutations occurring in our body that can lead to cancer.”

Internationally, scientists have so far identified only one promoter mutation, known as the telomerase reverse transcriptase (TERT) gene, that definitively contributes to cancer.

“Our study highlights the need for further research on the role of gene promoter mutations in cancer development,” Dr Wong said.

“This may ultimately help doctors to determine why certain cancers develop, enabling them to diagnose cancer earlier and select more tailored treatment therapies for patients.”

“The findings are all the more impressive because they were uncovered using existing and publicly available ‘big data’, simply by asking the right questions,” said study co-author, haematologist and UNSW Associate Professor John Pimanda.

“We didn't need to spend time and money recruiting patients, investigating their cancers and sequencing their cancer genomes. All of this data was available to researchers on public data sharing platforms.

“The research highlights the returns that can result from investing in bioinformatics and genomics research,” Associate Professor Pimanda said.

Change the Landscape of Cancer Detection and Treatment With Liquid Biopsies