Finding drugs capable of inducing miR-7 could therefore prove to be an effective treatment against the progression of gastric cancer.

Gastric cancer is the fourth most common cancer and the third leading cause of cancer-related deaths worldwide, according to the National Institutes of Health. miR-7, which is frequently decreased in gastric cancers, can stop the cancer cells from spreading to other tissues by inhibiting a particular growth factor receptor (called IGF1R). Whether miR-7 also suppresses earlier stages of gastric cancer is unknown, however, so researchers in China screened for new targets of the microRNA. 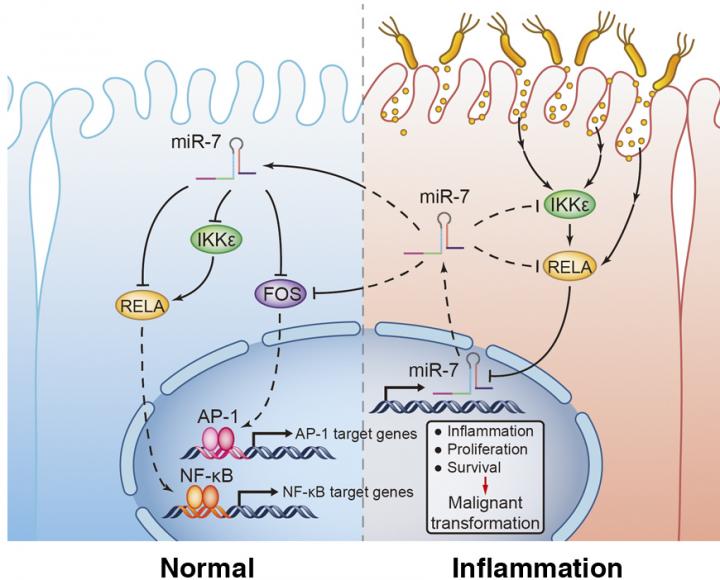 The researchers found that, as well as directly suppressing RELA expression, miR-7 could control the protein's activation by targeting its upstream kinase (IKKε) in the NF-κB pathway. Yet, this same pathway was itself able to repress miR-7 expression, indicating that miR-7 would be unable to restrain RELA's activity if the NF-κB pathway were strongly activated.

Chronic H. pylori infection is a major risk factor for gastric cancer, in part because the bacterium can hyperactivate the NF-κB pathway. Accordingly, Fan and colleagues found that culturing H. pylori with gastric cells activated IKKε and RELA, and reduced the expression of miR-7, a potentially key step in the transformation of healthy gastric cells into malignant ones.