Scientists Find What Controls Waking Up and Going to Sleep

Scientists Find What Controls Waking Up and Going to Sleep

Fifteen years ago, an odd mutant fruit fly caught the attention and curiosity of Dr. Ravi Allada, a circadian rhythms expert at Northwestern University, leading the neuroscientist to recently discover how an animal’s biological clock wakes it up in the morning and puts it to sleep at night.

The clock’s mechanism, it turns out, is much like a light switch. In a study of brain circadian neurons that govern the daily sleep-wake cycle’s timing, Allada and his research team found that high sodium channel activity in these neurons during the day turn the cells on and ultimately awaken an animal, and high potassium channel activity at night turn them off, allowing the animal to sleep. Investigating further, the researchers were surprised to discover the same sleep-wake switch in both flies and mice. 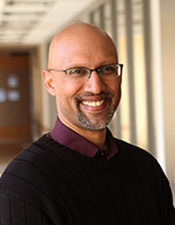 “This suggests the underlying mechanism controlling our sleep-wake cycle is ancient,” said Allada, professor and chair of neurobiology in the Weinberg College of Arts and Sciences. He is the senior author of the study. “This oscillation mechanism appears to be conserved across several hundred million years of evolution. And if it’s in the mouse, it is likely in humans, too.”

Better understanding of this mechanism could lead to new drug targets to address sleep-wake trouble related to jet lag, shift work and other clock-induced problems. Eventually, it might be possible to reset a person’s internal clock to suit his or her situation.

The researchers call this a “bicycle” mechanism: two pedals that go up and down across a 24-hour day, conveying important time information to the neurons. That the researchers found the two pedals -- a sodium current and potassium currents -- active in both the simple fruit fly and the more complex mouse was unexpected.

“What is amazing is finding the same mechanism for sleep-wake cycle control in an insect and a mammal,” said Matthieu Flourakis, the lead author of the study. “Mice are nocturnal, and flies are diurnal, or active during the day, but their sleep-wake cycles are controlled in the same way.”

When he joined Allada’s team, Flourakis had wondered if the activity of the fruit fly’s circadian neurons changed with the time of day. With the help of Indira M. Raman, the Bill and Gayle Cook Professor in the department of neurobiology, he found very strong rhythms: The neurons fired a lot in the morning and very little in the evening.

Flourakis, Allada and their colleagues then wondered if such a process was present in an animal closer to humans. They studied a small region of the mouse brain that controls the animal’s circadian rhythms -- the suprachiasmatic nucleus, made up of 20,000 neurons -- and found the same mechanism there.

“Our starting point for this research was mutant flies missing a sodium channel who walked in a halting manner and had poor circadian rhythms,” Allada said. “It took a long time, but we were able to pull everything -- genomics, genetics, behavior studies and electrical measurements of neuron activity -- together in this paper, in a study of two species.

“Now, of course, we have more questions about what’s regulating this sleep-wake pathway, so there is more work to be done,” he said.