Complete the form below and we will email you a PDF version of "So Long, Snout"

Birds are among the most successful creatures on the planet, with more than 10,000 species living across the globe, occupying a dizzying array of niches and eating everything from large animals to hard-to-open nuts and seeds.

Part of the key to that success, scientists say, might be right in front of their faces.

Led by Arkhat Abzhanov, a former associate professor of organismic and evolutionary biology, a team of researchers has shown that bird beaks are the result of skeletal changes controlled by two genetic pathways, shedding light on the origins of one of nature’s most efficient tools.

“The evolution of the beak was a seminal step for modern birds that made them distinct from primitive birds who still had snouts,” Abzhanov said. “With this paper we wanted to understand that process in mechanistic terms.” 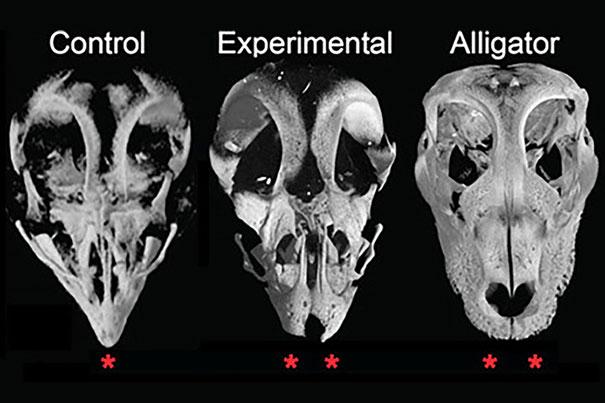 The first step toward answers, Abzhanov said, was to clarify why birds have beaks at all.

“The immediate ancestors of birds had very long fingers and a somewhat opposable thumb,” he said. “It’s believed they could use their hands to build nests and manipulate small prey … and that’s exactly what birds lost when they evolved wings — those fingers became bones in the wing. So once birds lost them, they replaced them with a finger on their face — the beak.

“Both the upper and lower beak can move, so it works like pincers, allowing a level of accuracy in handling and manipulating objects you can only achieve with fingers. I like to show my students a video of weaver birds, which use long grasses to weave nests, and even tie real knots during construction. You cannot do that with a snout.”

To get an up-close-and-personal view of how developmental patterns reveal the evolution of birds, Abzhanov and colleagues turned to their closest living relative — the alligator, a crocodilian.

“Because we can get live alligator embryos with snouts, we can actually compare them with beaked modern birds to see how they develop their faces, and what genes are activating during that process,” Abzhanov said.

The team discovered two genetic pathways, both of which are present in virtually all vertebrates, but which work differently in the development of bird faces.

These signaling pathways, FGF8 and WNT, tell cells how to proliferate and differentiate, and in land vertebrates are normally expressed in two regions, around the left and right nasal pits. In birds, however, expression also occurs in the middle of the face, causing the two regions to fuse to produce a single beak bone instead of paired facial bones.

“We later found that FGF8 mediates the expression of WNT,” Abzhanov said. “So the critical molecule in this entire story is FGF8. It’s expressed very early, and only transiently, but this change, this novel medial expression of FGF8, coincides with the appearance of the beak in modern birds.”

For insight into beak development, Abzhanov and colleagues interrupted the pathways in chickens, producing embryos with facial bones that looked remarkably like their snouted dinosaur ancestors.

“What happened is we got a range of phenotypes,” Abzhanov said. “Some looked fairly normal, and others were very different. In some embryos the bones that make up the beak did not fuse properly and developed more blunt shapes.”

The results of the study, he said, indicate that beaks did not emerge fully formed, but developed gradually through intermediate shape changes, some of which are yet to be found in the fossil record.

“We suggest paleontologists will be able to find fossils in the future which will bridge this gap between beaked modern birds and their snouted ancestors,” Abzhanov said. “That transition may have happened in an isolated geographic area, or may have happened very quickly, so they may be hard to find, but we predict that such transitional fossils will eventually be recovered and they will match some of our experimental animals.”

He added: “What’s important is we can now explain an important characteristic of the face unique to modern birds, an example of an evolutionary novelty.”

Advance Your Work in Molecular Diagnostics