Complete the form below to unlock access to this Audio Article: "Study Details Powerful Molecular Promoter of Colon Cancers"

Cancer researchers already know of some oncogenes and other factors that promote the development of colon cancers, but they don’t yet have the full picture of how these cancers originate and spread. Now researchers from the Perelman School of Medicine at the University of Pennsylvania have illuminated another powerful factor in this process.

“This work reveals and unravels an additional pathway for the origin of colon cancer,” said senior author Anil K. Rustgi, MD, the T. Grier Miller Professor of Medicine and chief of the Gastroenterology division.

Explorations of this pathway could lead to new ways of categorizing and treating colon cancers, which, together with less common rectal cancers, kill about 50,000 Americans every year. 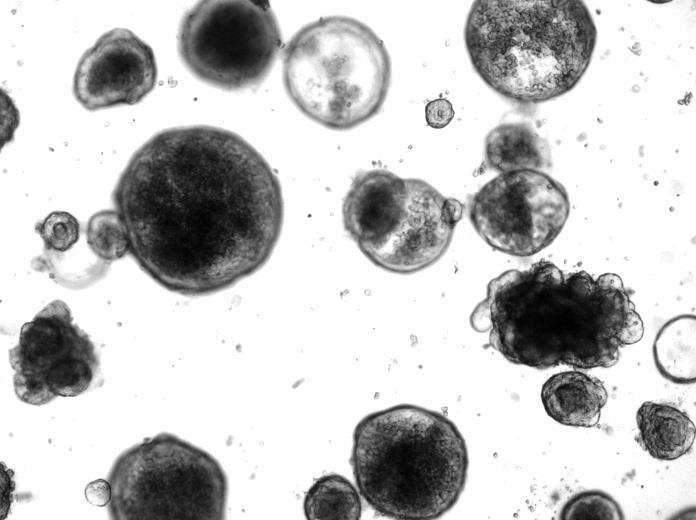 The research follows a 2013 study in Genes and Development from Rustgi’s group, which found that a protein called LIN28B promotes cancerous growth in intestinal cells by suppressing the Let-7 family of molecules.

LIN28B has attracted keen interest among biologists in recent years. The protein’s suppression of Let-7 molecules normally helps keep embryonic stem cells in their stem-like state, not only in humans and other mammals but in evolutionarily distant species too. When Let-7 molecules are allowed to work, cells tend to move out of the stem-like state and mature into specific cell types, with much less capacity for uninhibited growth.

This ancient interaction between LIN28B and Let-7 is clearly important for the normal development of animals to maturity and for other growth-related processes such as tissue regeneration after injury.  But as Rustgi and other scientists have been finding, LIN28B’s suppression of Let-7 is also abnormally switched on in many cancers.

In the new study, Rustgi’s team, including first author Blair B. Madison, PhD, who at the time was a postdoctoral fellow in the Rustgi laboratory and is now an assistant professor of Medicine at Washington University, looked downstream of the LIN28B/Let-7 interaction, to determine how Let-7 molecules normally keep intestinal cells from turning cancerous.

Let-7 molecules are not proteins. They are short stretches of RNA (microRNAs, or miRNAs) that work within cells to regulate the expression of various genes. To understand better what Let-7 miRNAs normally do to prevent cancer, Rustgi’s team created transgenic mice that produce no Let-7 miRNAs in the intestinal lining.

The researchers observed that adenomas adenomatous polyps, as well as adenocarcinomas resembling typical human colon tumors, sprouted in the intestines of all these no-Let-7 mice by mid-adulthood, increasing their mortality compared to normal mice. Analyses of the tumors, and of derived “tumoroid” three-dimensional cell clusters cultured in the lab dish, pointed to a protein called Hmga2 as a major factor in the tumors’ development.

Hmga2 is normally produced during the fast-growth period of fetal life and is thereafter suppressed by Let-7 miRNAs. Rustgi’s team observed that in the intestinal lining of the no-Let-7 mice, as well as in tumors and derived tumoroids, Hmga2’s gene was expressed at unusually high levels. Using antibodies to mark Hmga2 proteins, they found it to be particularly abundant in tumors that had begun to spread beyond the intestinal lining.

Analyses of gene expression in the tumors showed a strong relationship between the elevated expression of Hmga2 and the elevated expression of genes considered classic markers of stem cells. That observation adds to findings in recent years that many cancers, including colon cancers, may be driven in part by cancer cells that are in a stem-like state—which may enable them not only to proliferate more easily, but also to better withstand therapies.

Clearly, other factors were also at work in spurring the development of tumors in the Let-7-suppressed mice. Indeed, the researchers found evidence in the tumors of the overactivation of the Wnt signaling pathway, a known promoter of colon cancer—which in these cases may have become spontaneously switched on in some cells. “We suspect that that’s the main dysregulation that occurs after Let-7 suppression to boost tumor progression,” said Rustgi.

To check the relevance of these mouse results to humans, Rustgi’s group examined several hundred human colorectal cancer samples, and found, among other things, lower-than-normal expression of Let-7 miRNAs, and higher-than-normal expression of HMGA2 (the human version of the mouse Hmga2 protein) as well as stem cell markers. In these human cancer samples, HMGA2 expression was also associated with a more advanced stage of tumor growth and reduced survival.

The findings point to a surge in HMGA2 as one of the key factors that promotes colon cancer in the many cases where Let-7 levels are suppressed. HMGA2 is already being considered as a target for new treatments for other cancer types, and this study suggests that targeting HMGA2—perhaps in concert with Wnt signaling factors—may make a difference in colon cancer too.

“We think that there’s an axis of cancer promotion here, from LIN28B to Let-7 to the targets of Let-7, including HMGA2, and if one could disrupt the latter with therapeutics, that might help alleviate colon cancer progression and maybe metastasis as well,” said Rustgi.

HMGA2 levels may also have a prognostic value, since in this study high HMGA2 levels correlated with more advanced and invasive tumors and a poorer outcome. “We might consider a different therapeutic approach for such patients,” Rustgi noted.