The Linking of Molecules and Microbes

The Linking of Molecules and Microbes

Microbes are the oldest and most successful organisms on the planet, and they communicate and interact using chemistry as their language. It remains extremely challenging to understand these chemical interactions in natural environments, e.g. to tie the production of particular molecules to individual bacterial cells or at least populations of cells. Scientists now made an important step into this direction by simultaneously visualizing the distribution of antibiotics and their producers in natural samples.

Since the discovery of penicillin by Alexander Fleming in 1928, antibiotics have revolutionized human medicine by providing successful treatment against numerous infectious diseases. The medical application of antibiotics has led to the notion that these compounds are produced by microbes in nature as weapons to combat competing organisms. However, recent discoveries of low concentrations of antibiotics affecting gene expression without detrimental consequences for the target organisms have challenged this view, providing evidence for signaling functions of these substances. 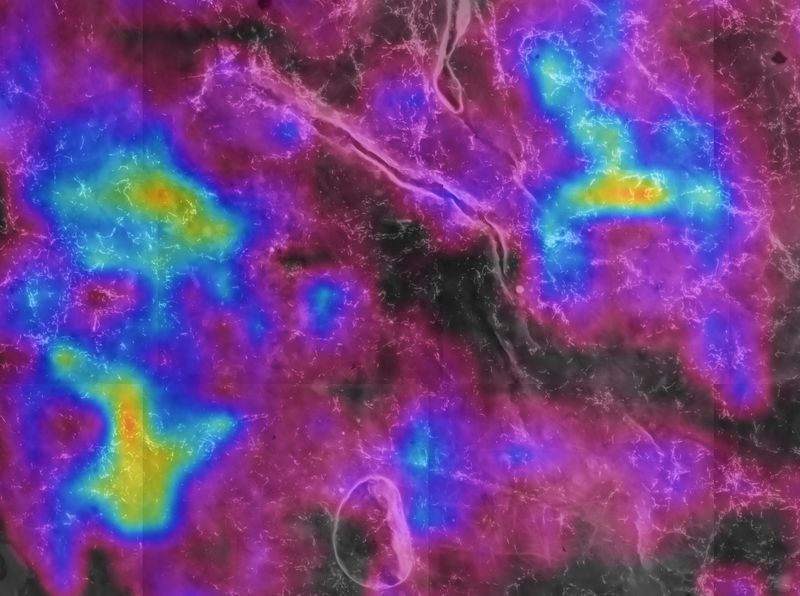 In general, surprisingly little is known about the ecology of antibiotics and how they function in the natural context, despite important implications for human medicine. One of the main problems is to detect and quantify antibiotics in complex environmental samples and monitor their production and effect in situ.

In order to achieve this, the scientists focused on a comparatively simple system that involves only a limited number of interacting organisms: The defensive alliance between European beewolf wasps, Philanthus triangulum, and bacteria of the genus Streptomyces. In this association, the symbionts are cultivated in specialized antennal reservoirs of female beewolves and later transferred to the cocoon of the developing offspring, providing protection against mold fungi during the long period of hibernation.

The knowledge about the presence of the symbionts as well as the antibiotics they produce on the beewolf cocoon provided an excellent basis for the scientists to devise a method for simultaneously localizing bacterial cells and the production of secondary metabolites in an environmental sample.

The measurement of antibiotics on the beewolf cocoon was achieved by mass-spectrometric (MS) imaging, a technique that uses a tightly focused laser beam to desorp and ionize compounds from the surface of a sample and analyze the resulting molecule ions in a mass spectrometer.

"Even though the lateral resolution of MS imaging is still limited, it has enormous potential for the detection and visualization of chemical compounds in nature, due to its broad applicability to a wide range of substances", says Aleš Svatoš, head of the Mass Spectrometry Research Group.

On the beewolf cocoon, MS imaging revealed the patchy but widespread distribution of the antibiotics piericidin A1 and B1 across the outer surface. Subsequently, the cocoons were subjected to fluorescence in situ hybridization (FISH): By binding fluorescently labeled probes to the RNA of the bacteria, individual symbiont cells could be visualized under the fluorescence microscope.

Applying paint markings around the samples that were visible in both MS imaging and FISH then enabled the scientists to combine the resulting images of both techniques. This allowed for the simultaneous localization of individual symbiont cells and the abundance of antibiotics around them.

"Both methods were known before, but nobody had combined them yet. The strength of this approach lies in the potential for FISH to localize and identify individual cells in complex samples, and at the same time monitor ecologically relevant compounds by MS imaging", Martin Kaltenpoth comments, who headed the Max Planck Research Group Insect Symbiosis and is now a professor at the University of Mainz.

The world is full of microbes, and they affect all life on the planet. Understanding how they interact with each other and with multicellular organisms therefore presents a fundamental question in biology. Detecting and visualizing compounds in nature and identifying their microbial producers constitutes a first step to ultimately be able to monitor complex interactions directly where they occur and understand the original function of antibiotics and many other microbe-produced chemicals.