The Mystery of the Instant Noodle Chromosomes

The Mystery of the Instant Noodle Chromosomes

A group of researchers from the Lomonosov Moscow State University tried to address one of the least understood issues in the modern molecular biology, namely, how do strands of DNA pack themselves into the cell nucleus. Scientists concluded that packing of the genome in a special state called "fractal globule", apart from other known advantages of this state, allows the genetic machinery of the cell to operate with maximum speed due to comperatively rapid thermal diffusion.

Fractal globule is a mathematical term. If you drop a long spinning fishing line on the floor, it will curtail immediately into such an unimaginably vile tangle that you will either have to unravel it for hours, or run to the store for a new one. An entangled state like this is an example of the so-called equilibrium globule. Fractal globule is a much more convenient state. Sticking to the fishing line example fractal globule is a lump, where the line is never fastened in a knot, instead it is just curled into series of loops with no loops tangled with each other. Such a structure -- a set of free loops of different sizes - can be unraveled by just pulling it by two ends. 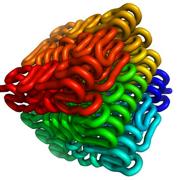 Due to this structure of loops or crumples,which reminds the structure of an instant noodle block, Soviet physicists Alexander Grosberg, Sergey Nechayev and Eugene Shakhnovich, who first predicted it back in 1988, named this structure "crumpled globule". In the recent years it is more often called a fractal globule. On the one hand, this new name just sounds more sophisticated and serious than "crumpled globule", but on the other hand, it fully reflects the properties of such a globule, because, like all fractals, its structure, which, in this case is represented by a set of loops of different sizes, is repeated in the small and large scale.

For a long time the predicted crumpled globule state remained a purely theoretical object. However, the results of the recent studies indicate that the chromosomes in the cell nucleus may be packed into a fractal globule. There is no consensus on this issue in the scientific community, but the specialists working in this area are much intrigued about this possibility and during the last 5-7 years there has been a flood of research on fractal globule packing of the genome.

The idea that chromatin (that is to say, a long strand consisting of DNA and attached proteins) in a cell nucleus may be organized in a fractal globule makes intuitive sense. Indeed, the chromatin is essentially a huge library containing all the hereditary information "known" to a cell, in particular, all the information about synthesis of all the proteins which the organism in principle is able to produce. It seems natural that such a huge amount of data, which should be preserved and kept readable in a predictable way, should be somehow organized. It makes no sense to make the strands consisting different parts of information entangled and knotted around each other, such an action seems akin to gluing or tying up together the volumes in a library: obviously, it makes the contents of the books much less accessible to a visitor.

In addition, it seems natural that a strand in a fractal globule has, in the absence of knots, a greater freedom of movement, which is important for the genome function: it is necessary for the gene transcription regulation that the individual parts of the genome meet each other at the right time, "activating" the signal for reading the entire system and pointing the place where the reading should start. Moreover, all of this must happen quickly enough.

"According to the existing theories if the polymer chain is folded into a regular equilibrium globule, the mean square of the chain link thermal displacement increases with time as time to the power 0.25", -- says Mikhail Tamm, a senior researcher at the Department of Polymer and Crystal at the Physics Faculty of the Lomonosov Moscow State University.

According to Mikhail Tamm, he and his colleagues managed to come up with a somewhat similar theory for a link of a polymer chain folded in a fractal globule.

"We were able to evaluate the thermal dynamics inherent to this type of conformation. The computer simulations we have conducted are in good agreement with our theoretical result", -- says Mikhail Tamm.

Scientists from the Lomonosov Moscow State University developed a computer modeling algorithm that allows to prepare a chromatin chain packed in a fractal globule state and to monitor the thermal processes taking place there. Importantly, they managed to model a very long chain, consisting of one quarter million units, which is the longest accessible so far.

According to Mikhail Tamm, chains in the modeling need to be long in order to get meaningful results, but modeling of long chains is usually hampered by the fact that it takes them a very long time to equilibrate, while without proper equilibration the results on thermal diffusion as well as other characteristics of the chains are unreliable.

The researchers were able to successfully solve this problem by the combination of a properly constructed software and access CPU time on the MSU supercomputer "Lomonosov", and assess the dynamics of the thermal motion in a fractal globule. It was found that the links of the chromatin chain packed in a fractal globule moves faster than in a comparable equilibrium one. Indeed, the mean square thermal displacement of the link does not grow in proportion to the time to the power 0.25 anymore, but as time to the power 0.4. It means that the movement of the links turns out to be much faster. It seems to be an additional argument in support of the fractal globule model of the chromatin.

The researchers hope that their work will help to provide better insight in the functioning of the gene storage and expression machinery in the cell nucleus.

"From the point of view of dynamics, we would like to understand what are the built-in characteristic times, what processes can occur simply due to thermal motion, and which ones inevitably require the use of active elements to speed up the functioning of DNA", -- summed up Mikhail Tamm.