Ruairi is a senior science writer at Technology Networks. He holds a Master's degree in clinical neurosciences from the University of Cambridge and has written for Technology Networks since 2018.
Learn about our editorial policies
View of the valley from above the Denisova Cave archaeological site, Russia. Credit: Bence Viola, Max Planck Institute for Evolutionary Anthropology

Complete the form below and we will email you a PDF version of "The “Neandersovan”: Ancient Neanderthal-Denisovan Offspring Reveals Genomic Secrets"

A research group has announced that DNA sequenced from an ancient bone fragment found in a cave in Russia suggests it came from a hybrid of two now-extinct groups of archaic humans, Neanderthals and Denisovans. The findings shed light on how these two species interacted and implies that Denisovan/Neanderthal mating was far more common than first thought.

“We knew before that such individuals must have existed, because the high coverage Denisovan genome published in 2012 has a little bit of Neanderthal ancestry.  But it is sort of crazy to actually find such an individual.  It makes us wonder how many such individuals existed,” says Benjamin Vernot, researcher at the Max Planck Institute for Evolutionary Anthropology (MPI-EVA) in Leipzig and one of three first authors of the study.

Interest into Denisovans began 10 years ago when an Russian archaeological team investigated Denisova Cave, in the remote Bashelaksky Range of the Altai mountains in Siberia. There, the team found a finger bone from a then-unidentified hominid, who was estimated to have lived between 30 and 50 thousand years ago. These samples were sent to Germany, where a research team led by Johannes Krause and Svante Pääbo, also of the MPI-EVA (Pääbo is lead author of Vernot's paper), analyzed the sample. This finding, the first Denisovan bone fragment, became just one of thousands recovered from the cave, which also held fragments from the better-studied Neanderthal. Both species are thought to have been replaced by modern humans around 40,000 years ago. 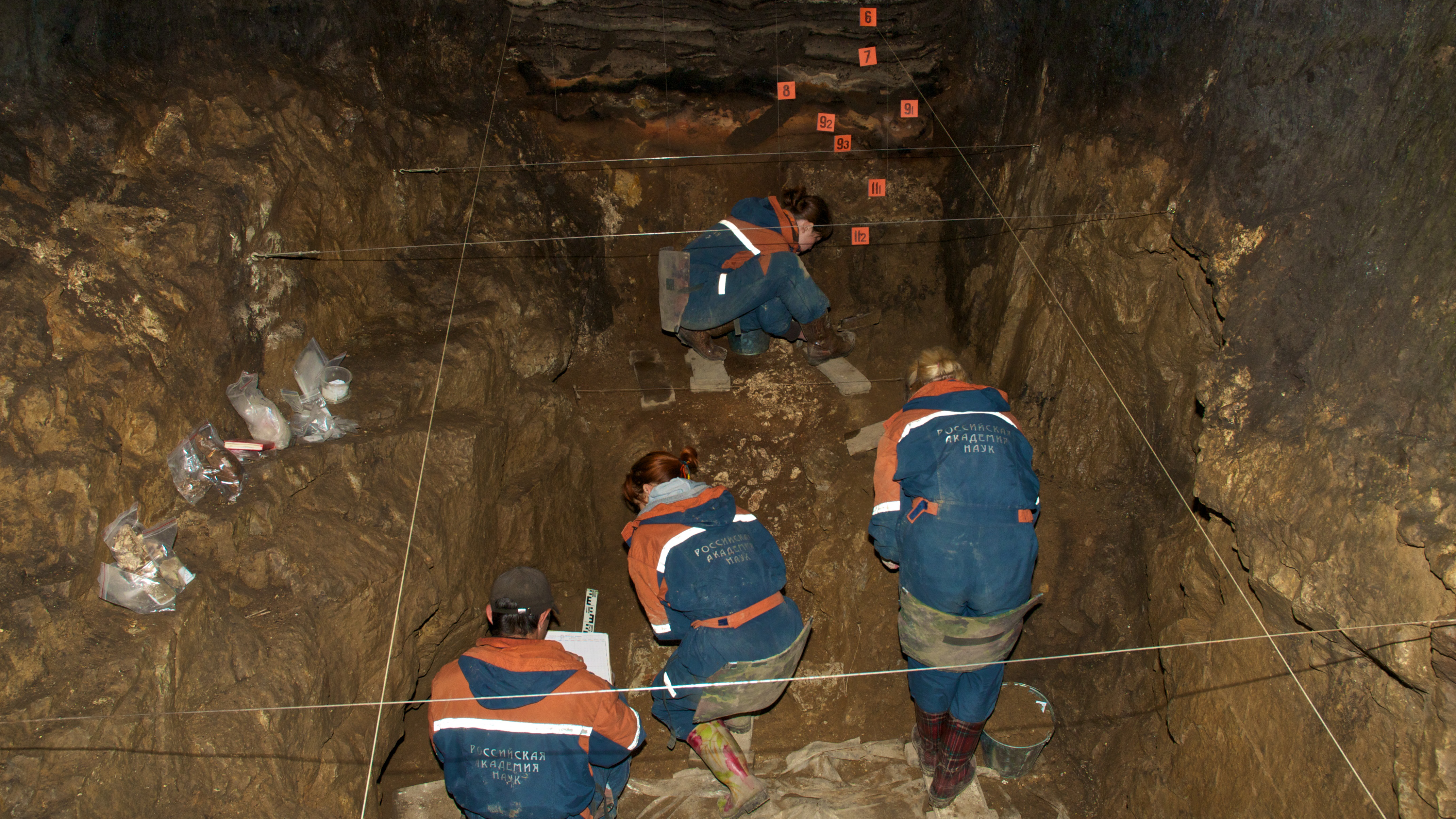 The Denisovan/Neanderthal offspring identified in Vernot's research is estimated to be around 90,000 years old, and comes from what researchers have inferred from genetic and morphological markers to be a 13-year old female. The team extracted DNA from 30 mg of bone powder and used Illumina sequencing to tease out the secrets of her ancestry.

What really surprised the team was the presence of roughly equal amounts of DNA matching Neanderthal and Denisovan genomes, as would be expected if the, let’s call her for simplicity’s sake, “Neandersovan”, had one set of chromosomes from each lineage. Further analysis ruled out the possibility that both her parents were each of mixed Denisovan/Neanderthal ancestry, and the team concluded that their bone fragment came from the offspring of a Neanderthal mother (her mitochondrial DNA, passed down only from the mother’s side, was Neanderthalic) and a Denisovan father.

There was one further surprise for the researchers: the sequencing results suggested that the Denisovan father had Neanderthal ancestry as well. “So, from this single genome, we are able to detect multiple instances of interactions between Neandertals and Denisovans”, explains Vernot.

These findings tell us several things about how ancient hominids interacted in ancient Europe. Of the 2000 bone fragments in Denisova cave, nuclear DNA has only been recovered from six individuals. Two of them, including the Neandersovan, have been identified as containing both Neanderthal and Denisovan DNA. “It is striking that we find this Neanderthal/Denisovan child among the handful of ancient individuals whose genomes have been sequenced”, said Pääbo, Director of the Department of Evolutionary Genetics at the MPI-EVA., in a press release. 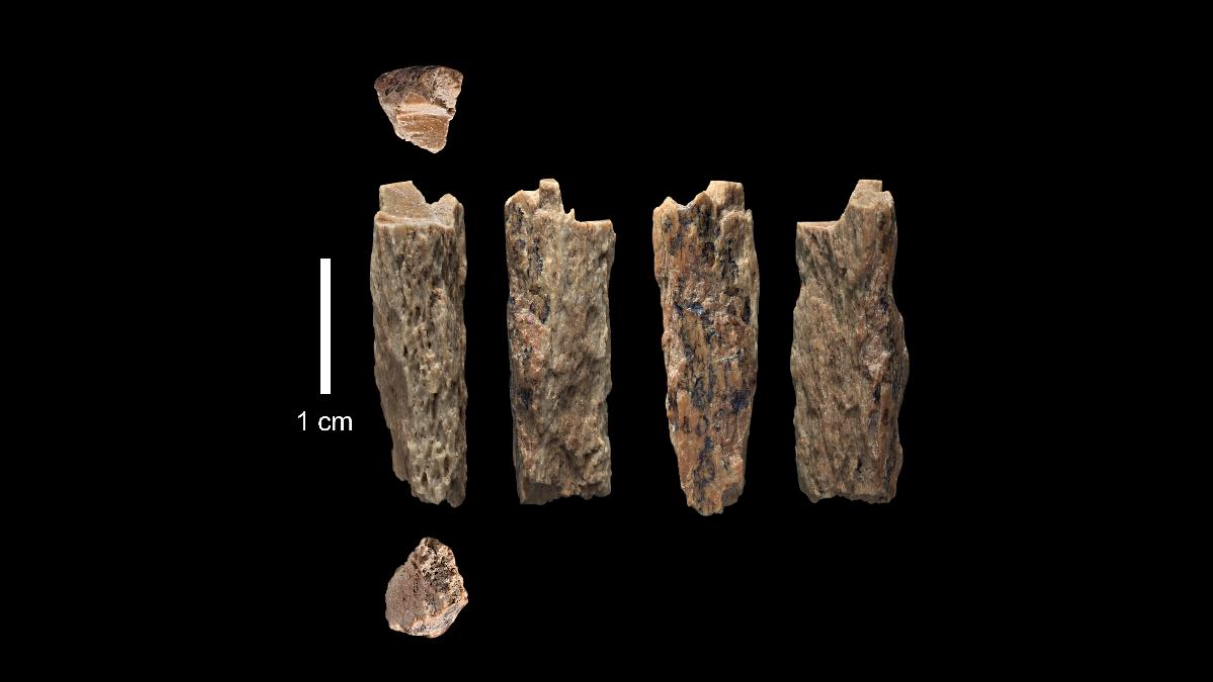 Chunks of bone recovered from Denisova Cave. Credit: MPI-EVA
The researchers say this suggests that mating interactions between the species must been more common than previously thought. Archaeological evidence of Neanderthals is largely found in Western Europe, far from Denisova. The mother of the Neandersovan was much more closely related to a group of these Western Neanderthals that lived 20,000 after the Neandersovan than to Neanderthals who lived earlier in Denisova. This suggests that Neanderthals migrated between Western and Eastern Europe tens of thousands of years before their extinction.

If the two species did so readily make offspring together, why is there no evidence of Neandersovans scattered across Europe? The researchers say that restrictions in space and time when the two species met, as well as a reduced evolutionary fitness of the offspring, probably contributed to Neandersovan scarcity. This doesn't rule out the possibility of further discovery, says MPI-EVA researcher Viviane Slon, who co-authored the research, "We really haven't sequenced (yet!) that many individuals from the relevant prehistoric period - it is very possible there are more out there, we just haven't seen them yet. Additionally, Neanderthals lived across Western Eurasia and we think that Denisovans lived to their east, so the geographical area where these people could have met may have been restricted."

The study raises plenty of questions about how these ancient humans moved around the world, but the discovery of this Neandersovan provides some rare definite answers to hominid evolutionary history, and will not be the last clues to come out of the depths of Denisova, says Vernot, “We would like to do very dense sampling of all of the layers of Denisova cave, and look at the population history there, of not just a single bone but rather the whole history.  We are currently working on projects like this in other caves, using DNA from sediment.  This is the future of ancient DNA research, I think.”