Now, researchers at Uppsala University have found that evolution is more complex than this model would have it, and that the tree is actually more akin to a bush.

Less than a year ago, a consortium of some hundred researchers reported that the relationship between all major bird clades had been mapped out by analysing the complete genome of around 50 bird species. This included the exact order in which the various lineages had diverged.

Since then, two of the members of the consortium, Alexander Suh and Hans Ellegren at the Uppsala University Evolutionary Biology Centre, have expanded upon this model by analysing the avian genome through a new method, which hinges on so-called ‘jumping genes’. Their results paint a partially contrasting picture of the kinship between the various species. 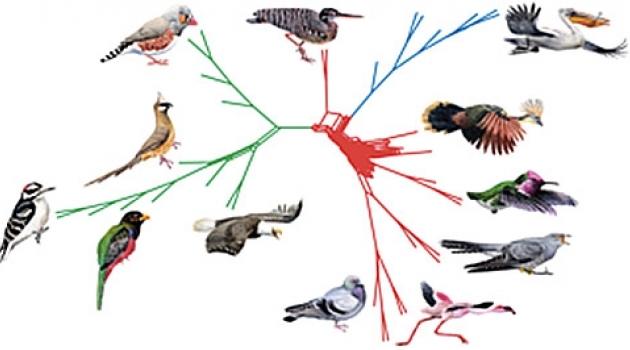 ‘We can see that the very rapid rate at which various bird species started evolving once the dinosaurs went extinct, i.e. around 65 million years ago, meant that the genome failed to split into separate lineages during the process of speciation’, Hans Ellegren says.

This is because evolution moved quickly, and many species arose in quick succession. When this happens, different parts of the genome can tell disparate tales of the kinship between the new species. The phenomenon has previously been explained theoretically and is a result of the genetic variation passing from one species to another. If new species then continue to evolve quickly, random chance can end up determining which original genetic variants end up in each lineage. The phenomenon is called incomplete lineage sorting.

‘Previously, the difficulty resided in finding instances of incomplete lineage sorting far back in time’, Hans Ellegren says. ‘Therefore, it’s been unknown if this phenomenon has affected evolution to any appreciable extent’.

By using the jumping genes, or so-called retrotransposed elements, the Uppsala researchers have found that, for instance, a cuckoo can be more closely related to a hummingbird than a pigeon in a certain part of its genome, while the opposite holds true in another part. The study found numerous examples to corroborate the existence of the phenomenon.

This is one of the first cases in evolutionary research where researchers have been able to document and quantify incomplete lineage sorting far back in time. It is likely a far more common occurrence than previously thought.

‘The more complex kinship patterns that result from this phenomenon mean that the Tree of Life should often be understood as a Bush of Life’, Alexander Suh and Hans Ellegren say.