A team of researchers has identified the genes responsible for the spiraling conical structures that comprise the Romanesco cauliflower, and have replicated these patterns in a small flowering plant called Arabidopsis thaliana. The study was published in the journal Science.

Cauliflowers, together with some flowers – including dahlias and daisies – develop in a defined arrangement of “phyllotactic spirals” whereby botanical elements develop at a constant divergence angle from the previous one, in essence, repeating themselves indefinitely.

The spiraling patterns seen on the Romanesco are known as “fractals” – derived from the Latin word “fractus”, which roughly translates to fragmented or broken. Polish-born French American mathematician Professor Benoit Mandelbrot coined the term “fractal”. Quickly recognizing their relevance in many areas, including science, engineering and finance, led him to dedicate much of his life to the field of fractal geometry. In a 2001 MIT lecture Mandelbrot described fractals as “simple, complex and open-ended”.

“Fractals are mathematical objects that have very irregular shapes – the contrary to what we imagine when imagining ‘smooth’ shapes,” says Christophe Godin, a senior researcher at Inria and corresponding author of the Science study. 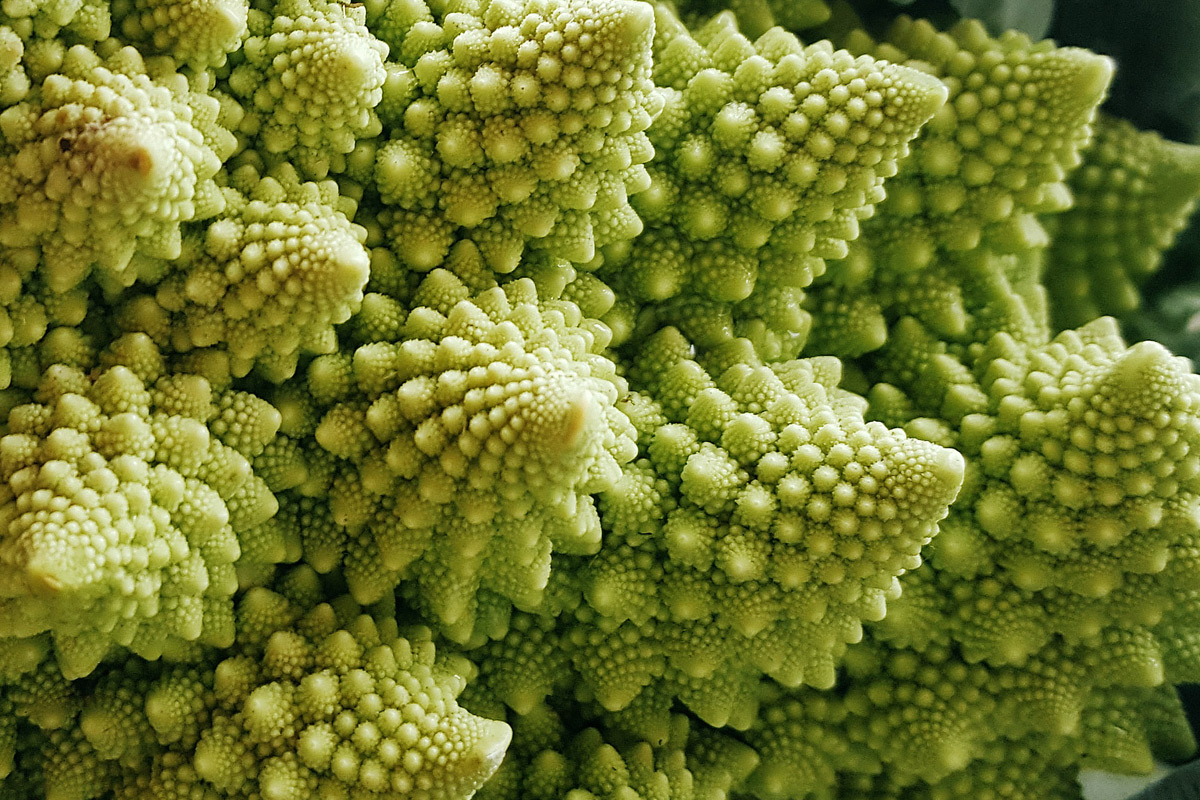 Godin explains that it is common to observe a motif repeated throughout a structure at many scales, describing the process as “self-similarity”.

“Fractals are usually constructed using simple mathematical rules, repeated again and again. However, objects resembling fractals do exist in nature and the Romanesco cauliflower is probably one of the most conspicuous examples of such an irregular, self-similar structure created in this way,” explains Godin.

While the scientific community has known about these peculiar fractal forms for some time, what remained elusive was how they developed biologically.

What was the underlying mechanism responsible for their formation? “This is this question I sought to address with my colleague François Parcy and our two groups, starting 12 years ago,” says Godin.

Parcy and his team at The Cell & Plant Physiology Laboratory is focused on studying how flower development is controlled at the transcriptional and chromatin level.

Solving the mystery of spiraling fractals

All cauliflowers are created from spiraling florets, each floret is itself made of a spiraled pattern of smaller florets. However, Godin cautions “this fractal organization is not very visible, as the surface of all the florets is relatively flat and makes a round curd.”

But the Romanesco cauliflower is unique, its spirals have been unfolded in three dimensions, allowing it to “take on a striking conical structure – spiking out at all scales in beautiful spiral motifs.”

The researchers manipulated the genes of Arabidopsis thaliana, a plant that is widely used as a model organism for research, belonging to the same family (Brassicaceae) as the cauliflower. In the 1990s, researchers discovered an Arabidopsis variant, that, due to the mutation of two genes, transformed its flowering stems into small cauliflower-like structures or “curds”. “We, therefore, decided to start our investigation on this double mutant of the model plant,” says Godin. 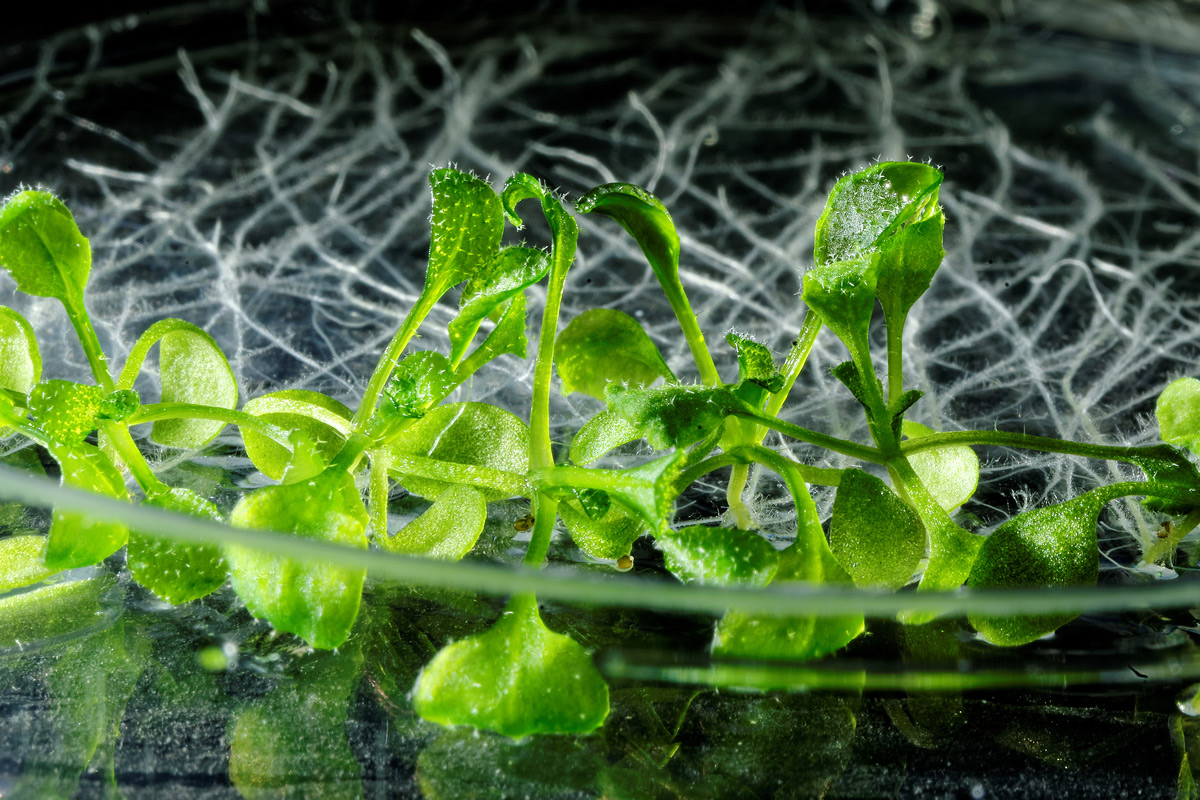 The researchers first analyzed how the two mutated genes (APETALA1 (AP1) and CAULIFLOWER (CAL)) could possibly transform a flowering stem into a cauliflower curd. This led them to identify a set of core genetic factors (in addition to the two mutated genes) that were essential to the development of curds. “These genes altogether form what we called the SALT network,” explains Godin.

The SALT network is comprised of several genes that have been previously linked to inflorescence and flower development and the development of cauliflower-like structures in Arabidopsis thaliana. The team also included auxin, a phytohormone that stimulates the initiation of new primordia, and “F” which represents different molecules that are able to trigger flower production.

He continues, “This new step was decisive to figure out what could occur during the development of the curd that would yield a Romanesco-like pattern. We then understood that only an additional mutation could be responsible for transforming a cauliflower curd into a Romanesco-like structure.”

The researchers combined experimental analyses in the Arabidopsis thaliana mutant with computer modeling approaches to explore the hypothesis further.

“As soon as several genes are interacting together, it is in general not possible to predict intuitively what will result from such a complex interaction network. Simulations allowed us to quantify the dynamics of SALT genes interaction, to explore the possible outcomes, and finally to understand the key role of the temporary activation of floral genes in producing cauliflower curds,” says Godin.

They introduced a third genetic mutation (CLAVATA3 (CLV3)) into the Arabidopsis cauliflower mutant and the results showed that the Arabidopsis curds made conical structures, reminiscent of the Romanesco-like curds. “If the transformed plant is not as fractal as a Romanesco, this altogether clearly demonstrated that we understood the principle of curd developments and the way to impact their shapes,” says Godin.

The findings were clearly highlighted in their paper: “We found that curd self-similarity arises because the meristems fail to form flowers but keep the “memory” of their transient passage in a floral state.” Meristem cells reside at the shoot and root tips, are responsible for plant growth and can differentiate to form various parts of the plant.

Now that the team has decoded the development principles of the Romanesco cauliflower, they plan to dig further into the edible cauliflowers to ascertain the specific genetic transformations responsible for converting the ancestral plants into the cauliflowers we see today.

Godin highlights a key development in the field: “Recent, very exciting results obtained from a massive sequencing of cauliflower plants have been reported by a Chinese [research] group, pointing at genetic differences between different species.”

Godin hopes that by combining the group’s results with their own findings it will be possible to gain a new understanding of how development proceeds.