In a new study, researchers have found that strong facial similarities are associated with shared genetic variants and lifestyle traits. The findings are published in the journal Cell Reports.

Same face, but not related

Each of the ~7.9 billion people living on our planet are biologically unique, owing to our individual DNA composition, the environment surrounding us and our life experiences. And yet, it’s possible that walking down the street one day you might stumble across somebody who has a strikingly similar face to yours – a “doppelganger”.

Cases of doppelgangers – biologically unrelated lookalikes – have been documented throughout history, sometimes with a dark twist; mythology previously interpreted their existence as a symbol of bad luck. Many doppelgangers in literature have represented an “evil twin”, or a symbol of a person’s “duality”.

Nowadays, doppelgangers are often a source of light-hearted entertainment. Some examples of celebrity lookalikes (think singer Katy Perry and actress Zooey Deschanel) really make you question, “Are you sure they’re not related?”

With a global increase in the use of social media platforms and other image-sharing tools, more people are identifying their “virtual twin”. Canadian artist François Brunelle has been collecting worldwide images of lookalikes since 1999. His project, “I’m not a look-alike” is dedicated to photographing people that share similar facial features from around the world.

“In 2005, we discovered that twin brothers that have the same DNA (also called monozygotic twins) presented with epigenetic differences (chemical modifications in the DNA sequence that regulate gene expression) that explained why they were not perfectly identical,” says Esteller. “In the current study, we have explored the other side of the coin: people that have the same face but are not biologically related. These individuals helped the answer the long-standing question of how our aspect is determined by nature and/or nurture.” 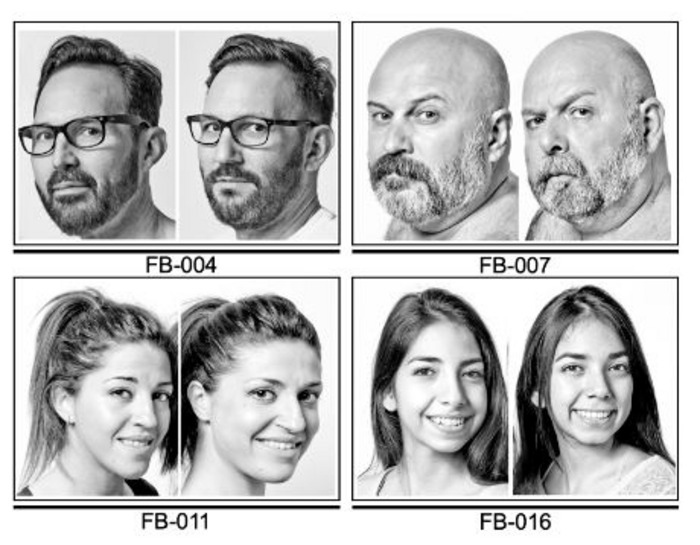 The researchers recruited 33 look-alike pairs from Brunelle’s work, including 42 females and 22 males aged between 23 and 78. To quantify objective likeness, they applied three facial recognition algorithms. “The studied look-alike humans were provided by the French-Canadian photographer François Brunelle, thus, their denomination as “doubles” was subjective. To make it more scientifically objective, we ran three independent facial-recognition algorithms (one academic, one from Microsoft and another from a security company) that are used to provide a complete readout of the face and can distinguish one face from another,” explains Esteller.

Participants were asked to provide answers to a biometric and lifestyle questionnaire, which explored height and weight, blood group, environment, diet, lifestyle and relationship factors. DNA samples were obtained from the cohort to conduct multiomics analysis, focusing on genetics, epigenetics and microbiome data.

Multiomics is the scientific study of the “omes”, including the genome, transcriptome, epigenome, proteome, metabolome, lipidome and microbiome, and the collection and integration of this data.

“DNA was the most stable component of the samples that can be tested. From this sample we could determine the DNA sequence (genome), the DNA methylation status (epigenome) and the bacteria and viral content (microbiome). All three of these components are critical for determining cell and tissue activity,” says Esteller when asked why a multiomics approach was adopted.

From the 32 pairs, 16 were clustered by all three facial recognition algorithms. “In the case of many lookalikes, the three programs gave the same results: they were unable to distinguish the faces, they were virtual twins!” says Esteller.

Genome-wide association study (GWAS) analysis of the DNA obtained from these 16 participants’ saliva revealed that 9 of these pairs clustered on a genetic level, with 19,277 shared single-nucleotide polymorphisms – a type of gene variation.

The researchers found that the genetic sites shared by the lookalikes corresponded to five categories when analyzed using large GWAS databases:

A GWAS study scans the genome to identify genetic variations associated with a particular phenotype – for example a disease – across populations. If a genetic variation occurs across individuals possessing the same phenotype, it is considered that an association exists between that genetic variation and the phenotype. Associations are correlations, not proof of cause.

SNPs are the most commonly occurring type of genetic variation. They involve a change in a single nucleotide, for example the swapping of adenosine to thymine, in a DNA sequence.

Next, the researchers explored whether any similarities existed between the epigenetic profiles of clustered pairs. Epigenetic processes – such as DNA methylation – are complex molecular mechanisms that change the way in which genes are read, rather than the DNA code itself.

DNA methylation is the one of the most-studied epigenetic processes and involves the addition of a methyl group to a DNA molecule. The methyl group can prevent proteins from attaching to DNA and transcribing it, therefore halting the process of the gene becoming “activated”. The research group found that only one of the pairs clustered together via DNA methylation analysis. The same pair had also clustered during the SNP analysis, which the researchers believe may be due to “underlying shared genetics”. When evaluating microbiome similarities and differences, the researchers also found that only one lookalike pair clustered.

As for the biometric and lifestyle questionnaire, Esteller and colleagues discovered correlating results in the lookalike pairs. He says, “It is said that our face reflects our soul […]  being less poetic, our lookalikes answered a large questionnaire to grasp their physical and behavioral profiles. We observed that those lookalikes with high concordance in the facial algorithms and genetic commonalties not only shared facial similarities, but also other features beyond that, such as anthropometric characters (i.e., height and weight) and personality traits (i.e., tobacco addiction, education stage that could relate to IQ, etc.)”

A rare insight into human likeness

The study authors acknowledge that the work is not without limitations, including a small sample size that was predominantly European, and the use of black and white 2D imagery. Nonetheless, they believe that the findings offer a “rare insight” into human likenesses, illustrating that people with extremely similar faces possess common genotypes, but are distinguished by their epigenetic and microbiome profiles.

“Genomics clusters them together, and the rest set them apart,” the researchers conclude.