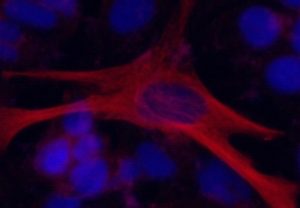 The ability to control gene expression in cells allows scientists to understand gene function and manipulate cell fate. Recently, scientists have developed a revolutionary gene-editing tool, called CRIPSR/Cas9, which employs a system naturally used by bacteria as protection against viruses. The tool allows scientists to precisely add, remove or replace specific parts of DNA. CRISPR/Cas9 is the most efficient, inexpensive and easiest gene-editing tool available to date. However, scientists have not yet managed to effectively use it to activate genes in the cells.

A team, led by Toru Kondo at Hokkaido University’s Institute of Genetic Medicine, has developed a powerful new method that does just that.

Genes in cells have their own switches called promoters. A gene is switched off, or silenced, when its promoter is methylated. The team effectively wanted to turn on a switched-off gene.

The scientists used this tool on the neural cell gene OLIG2 and the embryonic stem cell gene NANOG to test its efficiency in cultured cells. Within five days, they found evidence that the genes were robustly expressed. When they turned on OLIG2 in cultured human stem cells, the cells differentiated to neurons in seven days with high efficiency.

The scientists also found that their editing tool could be used to activate other silenced promoters. In addition, they found that the system didn’t cause unwanted mutations in other non-targeted genes in the cells. The tool has wide potential to be used to manipulate gene expression, create genetic circuits, or to engineer cell fates.