These products, called immunostimulatory defective viral genomes, or DVGs, were once thought to have no biological function. Now they are being eyed as a gateway through which the immune system could be coaxed to mount a defense to clear the body of the virus.

“What we see is that DVGs are key in signaling the immune response to turn on,” said Carolina López, senior author on the study and an assistant professor in the Department of Pathobiology in Penn’s School of Veterinary Medicine. “This is the first study that shows that DVGs can critically impact the outcome of an RSV infection and that they are present in infected humans.” 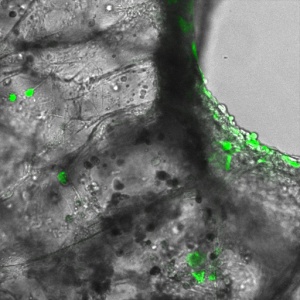 López and colleagues suspected DVGs may offer an answer. DVGs were discovered in the 1940s and for a time were investigated for their potential use in vaccination. They eventually were dismissed, however, thought to be an artifact of in vitro study. More recently, scientists have realized they are “real” and present naturally but have only used them as tools to conduct research or to help diagnose infections with HIV and hepatitis C.

When the RSV infects a host and begins to rapidly replicate itself, it produces defective versions of its genome that contain large deletions. DVGs by themselves cannot replicate and, in previous studies by the López lab, had been found in culture to trigger the expression of genes responsible for an anti-viral immune response. Yet no one had showed that they had a biological function in humans.

Next the researchers looked at a human cell line, finding that, as in the mice, RSV with higher levels of DVGs potently triggered the expression of interferon genes.

To see if DVGs were present in humans with RSV infections, the scientists analyzed the respiratory secretions collected from 41 children who had confirmed diagnoses of RSV at CHOP. They detected DVGs in nearly half of the patients and found that these same samples also contained higher levels of anti-viral genes than those without detectable levels of DVGs.

As a final experiment, the team obtained lung tissue from seven deceased donors and exposed slices of the lung to RSV to see how they responded. As seen in the mice, lungs exposed to RSV with high levels of DVGs had lower levels of viral replication and higher levels of antiviral gene expression one day after infection, though the researchers observed some variations from sample to sample, suggesting that there may be individual differences in how people accumulate DVGs and thus how they defend against the virus.

“If you put virus containing a lot of these defective genomes into human lung samples, they all respond,” López said, “but the difference was some patients’ tissue could accumulate the DVGs faster than others and that correlated with outcome. That tells you that there are host factors that modulate this response to DVGs and that that could predict outcomes. So now we want to find out what those host factors are.”

The researchers would also like to investigate ways of manipulating either the DVGs themselves or host factors to improve patients’ response to the virus.

“We have very few tools to manage RSV infection, so we’d obviously like to see if we can figure out a way to trigger an immune response and clear infection before any damage is done. That is the future.”