Zeroing In On Better Mandarin Traits

Zeroing In On Better Mandarin Traits 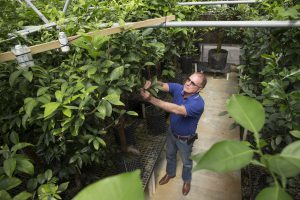 In their quest to develop higher quality mandarins, University of Florida Institute of Food and Agricultural Sciences researchers are zeroing in on the traits that will help them breed the best fruit.

Last year, they released the mandarin cultivar currently known as ‘7-6-27,’ which UF/IFAS researchers say is soaring with interest, and with more than 100,000 trees already ordered.

In a newly published study, Fred Gmitter, a UF/IFAS horticultural sciences professor, and his colleagues, including doctoral student Yuan Yu, found genetic markers for fruit quality traits that will be useful in future cultivar-breeding efforts.

In this study, the markers developed in one mandarin family predicted the fruit quality traits in 13 other unrelated varieties, Gmitter said. Without this process, researchers might have had to plant and grow 250 or more trees to maturity — a process that takes several years — to find a single one that has all the genetic characteristics they want in a new variety, Gmitter said.

The study’s findings translate to good news for consumers and growers, he said.

“Better fruit for consumers, from Florida growers, for a longer period of time,” said Gmitter, a faculty member at the UF/IFAS Citrus Research and Education Center in Lake Alfred, Florida. “Though growers will still have to wait for the new varieties to be selected, we will be producing even better ones than if we didn’t have these markers to use.”

The fruit – popularly known as tangerines — might even be less expensive because it’s closer to the market – not importing from Spain or trucking them across the country from California, Gmitter said.

That would be helpful to Florida growers and consumers because amid the steady increase of fresh mandarin consumption—1.39 pound per capita in 1991 to 4.17 pounds in 2012 — Florida’s share of the market has decreased. California now dominates the market, according to the U.S. Department of Agriculture National Agricultural Statistics Service.

In addition to cutting costs, Gmitter can already see another potential advantage to using genetic markers to breed better mandarins in the future.

“Imagine if we could also develop markers for phytonutrients, those things in the citrus fruit that improve human health; we could then breed simultaneously for better-looking, better-tasting, and healthier mandarins,” he said.