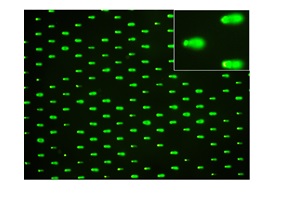 DNA damaging agents can promote aging, disease and cancer and are widespread in the environment as well as being produced within human cells as normal cellular metabolites. The ability to quantify DNA damage responses is consequently critical to researchers in public health, pharmaceutical or clinical labs.

The CometChip® is based upon the well-established single cell gel electrophoresis “Comet Assay”, which estimates the level of DNA damage by evaluating the extent of DNA migration through a matrix in an electrical field. The type of damage measured by this assay includes abasic sites, crosslinks, and strand breaks.

The Comet Assay has been available in 96-well format, the new CometChip® extends the productivity of this popular assay yet further. Instead of being randomly dispersed in agarose on a glass slide as the traditional Comet Assay, cells in the CometChip® are captured on an array of agarose microwells. Each well of the CometChip® contains approximately 400 microwells of 30 microns diameter, displayed in a defined pattern and depth which causes the captured test cells to reside in a single plane.

The 96 separate wells in the array are created by inserting the CometChip® into a reusable magnetically-sealed cassette suitable for tissue culture incubators. Cells added to each well are captured by gravity into micropores and excess cells are aspirated, leaving an array of non-overlapping cells. Multiple experimental conditions can be performed in parallel by the addition of different chemicals to different wells. Once treatment is complete, the CometChip® is removed from the cassette and processed using standard alkaline Comet conditions and imaging systems.

Leveraging this technological advance a single 96-well CometChip® can produce 20,000 data points per chip, based on an average of 208 cells imaged per well. With a capacity for three CometChips® per run, the output for just two runs per day is 120,000 data points. Our new Comet Analysis Software can analyze in minutes what used to take days, so that the data from these 120,000 cells can now be analyzed and exported to generate a report in under 20 minutes.