Published: May 20, 2020
|  Last Updated: June 7, 2022
| by Nicole Gleichmann and Karen Steward PhD
A boy receives the Schick Test from a doctor in 1915. The Schick Test is a measure of immunity to diphtheria. Credit: Photo by National Cancer Institute on Unsplash https://unsplash.com/photos/DAW9lgNkwYw
Read time:

Complete the form below and we will email you a PDF version of "Active vs Passive Immunity: Differences and Definition"

While the immune system incorporates all of the body’s defenses that help to protect us from anything that is not recognized as “self”, the term “immunity” is typically used to refer to the body’s ability to protect itself from infectious disease. If you are immune to a disease, it means your immune system is able to fight off infection by the causative agent.

Immunity is made up of both innate and adaptive arms. Innate immunity, also known as natural or genetic immunity, is something an organism is born with, encoded in their genes and protects them throughout their life. Innate immunity consists of:

Innate immunity is fast to act but not specific to the potential threat. 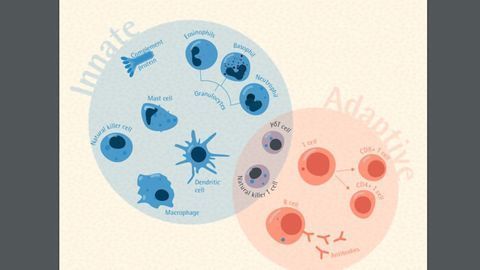 END_OF_DOCUMENT_TOKEN_TO_BE_REPLACED

What is active immunity?

Active immunity is defined as immunity to a pathogen that occurs following exposure to all or part of that pathogen.

When the body is exposed to a novel disease agent, a cascade of signaling molecules and action from the innate immune system results in activation of the adaptive immune system. Production of large numbers of T cells and B cells specific to the pathogen are promoted. Subsets of T cells kill the pathogen directly while others help to stimulate B cell production. B cells, a type of white blood cell, produce antibodies that assist in destroying or neutralizing the disease agent. Antibodies are y-shaped proteins capable of binding to sites on toxins or pathogens called antigens.

Antibodies are specific to a particular antigen epitope, so depending on the similarity between pathogens, may or may not offer cross-protection between different diseases. For instance, antibodies produced when the body detects the virus that causes mumps will not provide any defense against measles or influenza viruses. However, antibodies generated to one strain of influenza, may offer some protection against other closely related influenza strains. 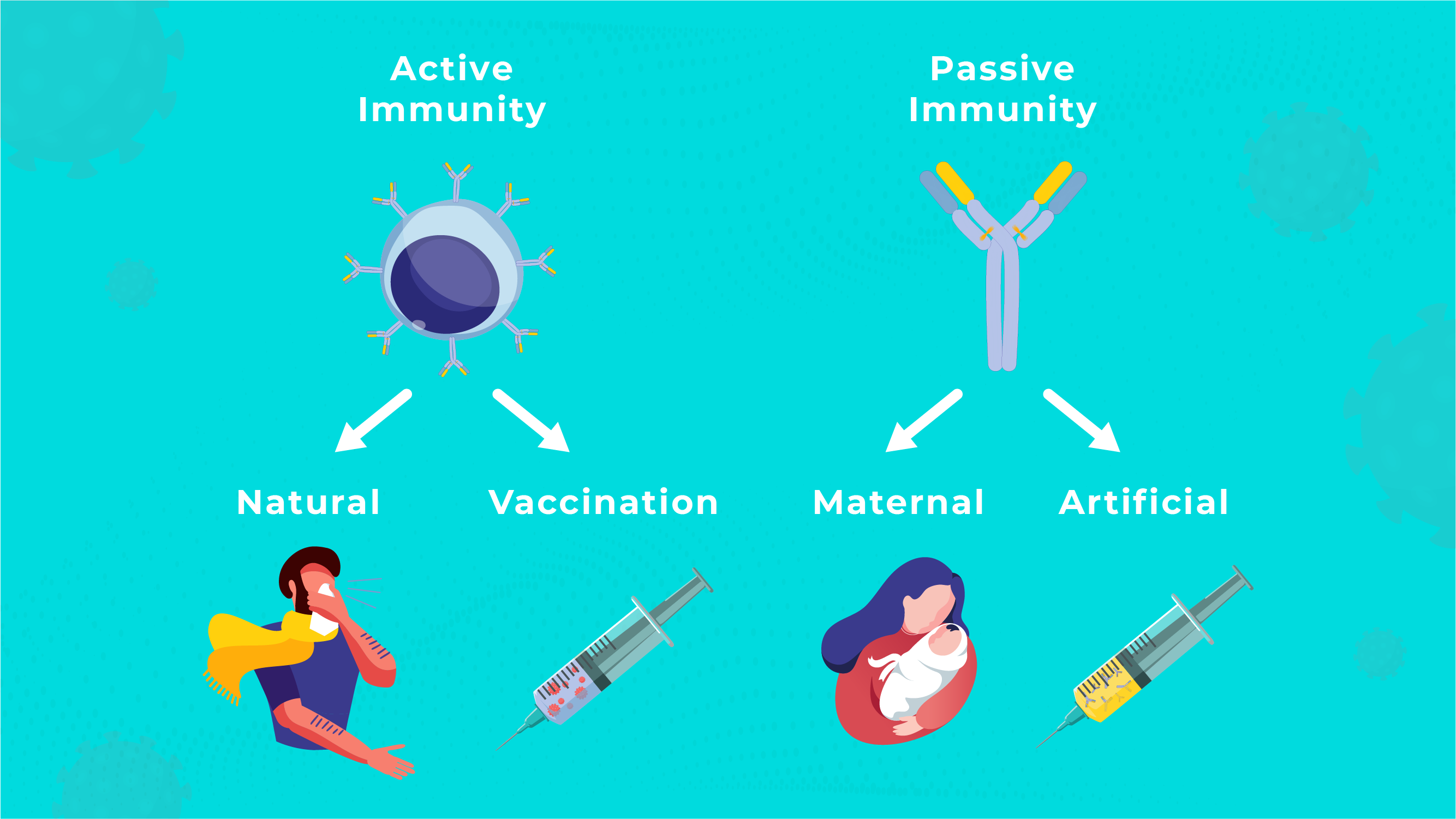 A diagram showing the different types of active and passive immunity

When B cells encounter a pathogen, as well as differentiating into antibody-producing plasma cells, they create memory cells. Memory cells are a type of B cell produced following the primary infection that can recognize the pathogen. They are typically long-lived, some surviving for decades, reactivating if the same pathogen invades again. While the adaptive immune response may take days or even weeks to respond on the first exposure, thanks to the presence of memory cells, the response to infection is typically swifter and more robust on subsequent encounters. While it varies between individuals and diseases, protection from some diseases can last a lifetime.

Active immunity can occur in one of two ways: naturally or via vaccination.

Natural immunity occurs when a person is infected by a pathogen. Take, for instance, someone who has chickenpox. After the initial infection, the body develops immune memory for the virus, conferring immunity against the disease so if they encounter it again, they are able to fight it off swiftly and don’t go on to develop clinical disease again.

Also known as artificial active immunity, a person can build resistance to a disease following an immunization. Immunization is the process that happens in the body following the administration of a vaccine aimed at conferring immunity to a pathogen.

Vaccines use a weakened or dead form of a pathogen or subunits from it that are known to stimulate the immune system to generate an immune response. Vaccines are typically administered using an injection, but some are also routinely administered via the mouth or as a nasal spray.

When a person’s immune system detects the pathogen, it begins to take steps to destroy and remove it. This includes forming new antibodies and memory cells specific to that pathogen. In the future, if the body is exposed to the same pathogen again, the corresponding memory cells will become activated, stimulating the production of antibodies to protect the body. The main advantage of active immunity gained via vaccination over natural infection is that the individual doesn’t have to go through the disease itself to become immune.

Vaccination and immunity are essential for keeping large populations of people safe from infectious diseases. For instance, the influenza vaccine prevents millions of people from developing flu every year and the SARS-CoV-2 vaccination programs worldwide likely prevented vast numbers of cases and deaths.

What is passive immunity?

Passive immunity is generally short-lived as the supply of antibodies is not being replenished as they would d be in someone whose own immune system was generating them.

Passive immunity can be either maternal or artificial.

Artificial passive immunity is conferred by the injection of antibodies generated by a different person or animal, or artificially in the laboratory, into an individual. These antibody-containing preparations are termed antisera and are used as a therapeutic treatment when there is a risk of some infections. Following a bite from a potentially rabies-infected animal, when a baby is born to a Hepatitis B-positive mother or following a bite from a venomous snake, the appropriate antisera or antivenom may be administered to offer passive immunity.