Endocytosis and Exocytosis: Differences and Similarities

Endocytosis and Exocytosis: Differences and Similarities

Complete the form below and we will email you a PDF version of "Endocytosis and Exocytosis: Differences and Similarities"

Why is bulk transport important for cells?

Cell membranes are semi-permeable, meaning they allow certain small molecules and ions to passively diffuse through them. Other small molecules are able to make their way into or out of the cell through carrier proteins or channels.

But there are materials that are too large to pass through the cell membrane using these methods. There are times when a cell will need to engulf a bacterium or release a hormone. It is during these instances that bulk transport mechanisms are needed.

Vesicle function in endocytosis and exocytosis

What is endocytosis? Endocytosis definition and purposes

Endocytosis is the process by which cells take in substances from outside of the cell by engulfing them in a vesicle. These can include things like nutrients to support the cell or pathogens that immune cells engulf and destroy.

Endocytosis occurs when a portion of the cell membrane folds in on itself, encircling extracellular fluid and various molecules or microorganisms. The resulting vesicle breaks off and is transported within the cell.

Endocytosis serves many purposes, including:

There are two types of endocytosis: phagocytosis and pinocytosis.

Phagocytosis, also known as cell eating, is the process by which cells internalize large particles or cells, like damaged cells and bacteria.

Pinocytosis, also known as cell drinking, is common in plant and animal cells. During pinocytosis, the cell takes in substances from the extracellular fluid that it needs to function. These include things like water and nutrients.

The steps of endocytosis

The following is an outline of the basic steps of the two types of endocytosis. 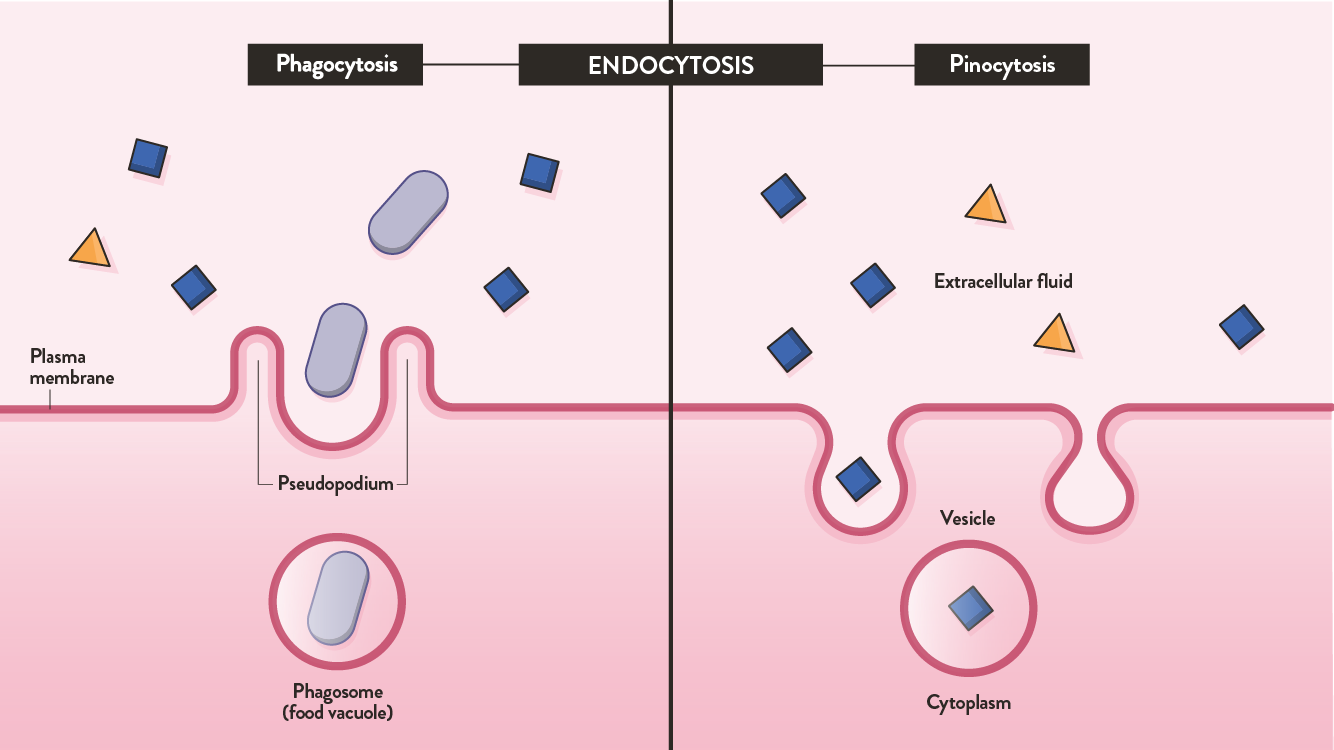 Macrophages are a type of white blood cell that play a central role in protecting mammals against pathogens like bacteria and viruses. When a macrophage comes into contact with a virus, say a cold virus in the bloodstream, it can bind to the virus’s cell surface.

Next, the macrophage will form a vesicle around the virus, completely ingesting it. The vesicle then travels to the cytosol and fuses with the lysosome, where the virus is broken down. Some viruses replicate by “tricking” host cells into endocytosing them, at which point the cell is hijacked by the virus and is instructed to replicate the virus genome and capsid.

What is exocytosis? Exocytosis definition and purposes

Exocytosis is the process by which cells move materials from within the cell into the extracellular fluid. Exocytosis occurs when a vesicle fuses with the plasma membrane, allowing its contents to be released outside the cell.

Most exocytotic vesicles contain substances created within the endoplasmic reticulum for use elsewhere in the body, such as neurotransmitters or hormones. These molecules are then packaged within a layer of membrane called a vesicle.

Once excreted from the endoplasmic reticulum, these vesicles are transported to the Golgi apparatus (also known as the Golgi complex) for further modification. The molecules are then packaged once again in a vesicle that makes its way to the plasma membrane.

The release of these molecules from the cell is termed regulated exocytosis because the expulsion of the materials is controlled, or regulated, by extracellular signals that cause membrane depolarization.

Constitutive exocytosis, in contrast, doesn’t require any extracellular signals. The majority of molecules traveling to the plasma membrane do so using this pathway.

After exocytosis, some exocytotic vesicles are incorporated into the plasma membrane (full vesicle fusion), while others return to the interior of the cell after their contents have been released (this is termed the “kiss-and-run” pathway). Others remain docked to the membrane, where they can be used multiple times (the “kiss-and-stay” pathway). 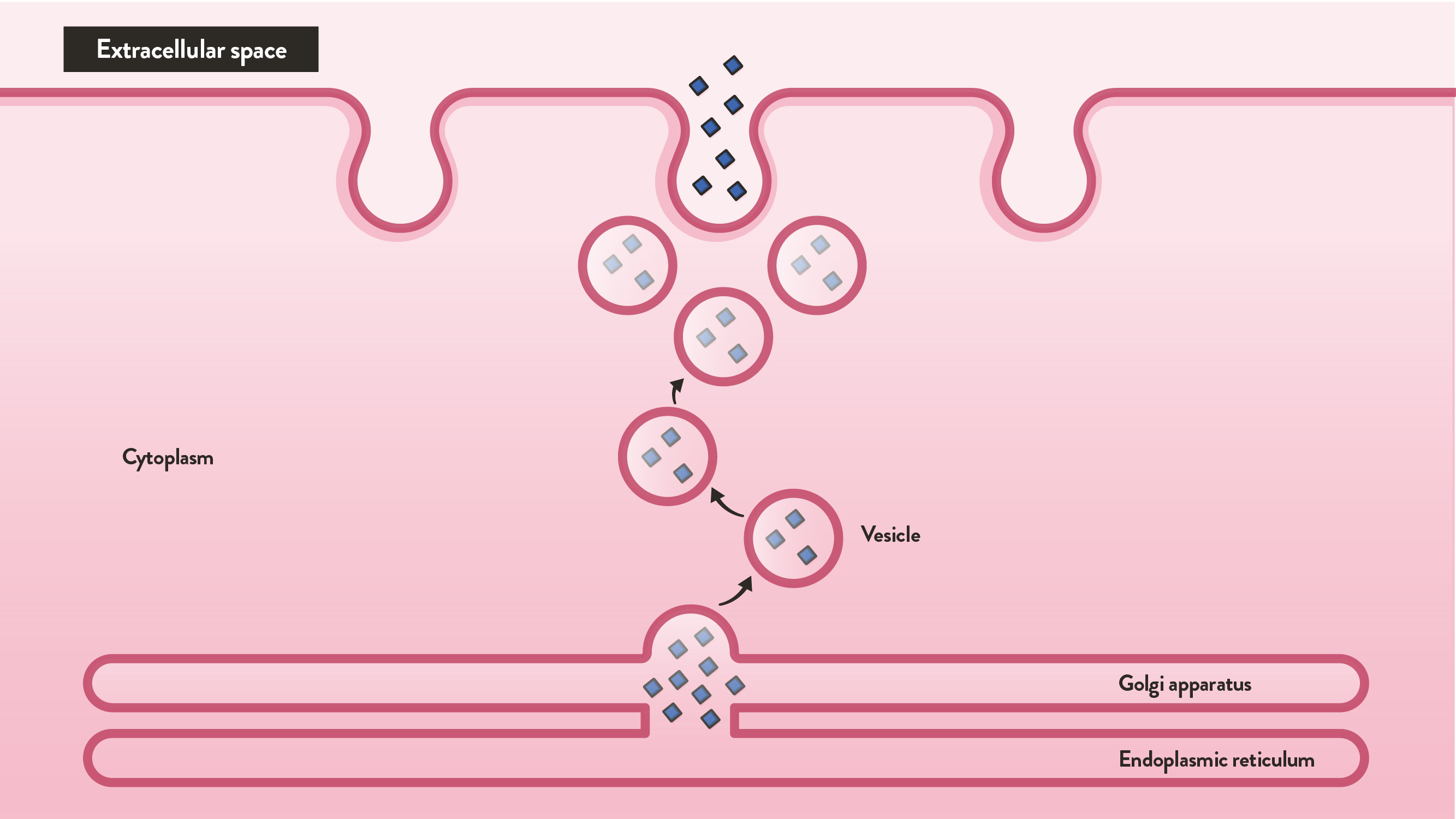 Exocytosis involves the passage of a vesicle from the endoplasmic reticulum or Golgi apparatus, through the cytoplasm to the cell membrane, where it fuses and releases its contents.

The steps of exocytosis

Below is an outline of the basic steps of exocytosis.

Let’s take the macrophage that we discussed in our endocytosis example. Once the white blood cell has engulfed a foreign pathogen eliminate it, certain parts of the pathogen are no longer needed. The macrophage gets rid of this waste material through exocytosis, during which vesicles carry out the unwanted pathogen material.

Endocytosis vs exocytosis: a comparison